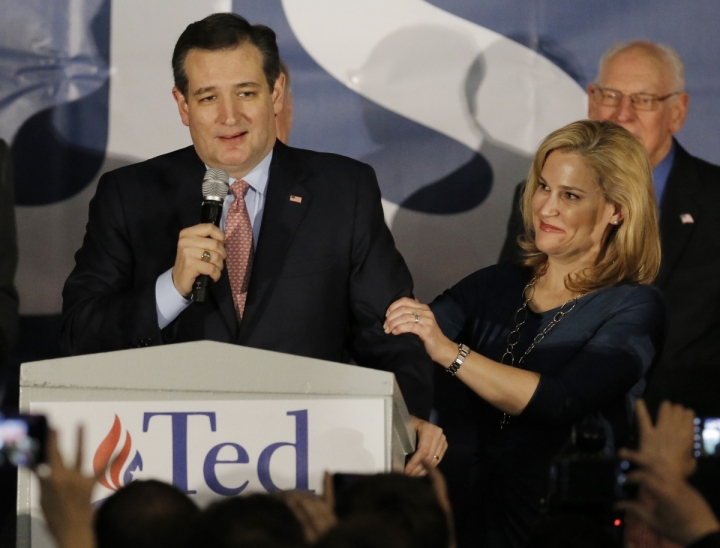 U.S. Republican presidential candidate Ted Cruz, with his wife, Heidi Cruz, by his side, speaks at a Des Moines rally after winning the Iowa caucus. Reuters photo

DES MOINES, Iowa (Christian Examiner) – Evangelicals helped carry Ted Cruz to a surprising victory in the Iowa Republican caucuses Monday night, although they were far from unified in their preferred candidate.

With frontrunner Donald Trump leading in every pre-election poll, Cruz carried 34 percent of the vote of Republicans who identify as evangelical or born-again Christians, a group that comprised 64 percent of Republican voters according to entrance polls. Trump won 22 percent and Marco Rubio 21 percent among evangelicals, with Ben Carson (12 percent) being the only other GOP candidate to reach double digits.

Among all caucus attendees, Cruz won 28 percent, Trump, 24 percent and Rubio 23 percent. Trump led Cruz by an average of 4.7 percent in the RealClearPolitics.com average of Iowa polls, although two weekend surveys showed Cruz cutting Trump’s lead to one point, with Rubio surging.

By John Hebert, Louisiana Baptist missions and ministry team leader ALEXANDRIA, LA. (LBM)--Do you know what Winston Churchill, Bill Gates, Walt Disney, and Colonel Sanders have in common? It has nothing to do with their fame or notoriety, I would suggest. Instead, it is the trait that I contend was the cause of … END_OF_DOCUMENT_TOKEN_TO_BE_REPLACED