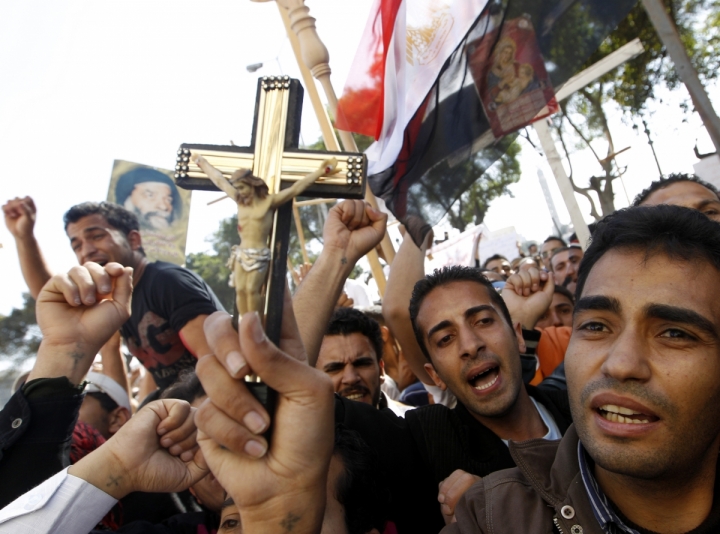 People demonstrate in front of the Egyptian Television building to protest the torching of a church in the village of Sol in Atfeeh, south of Cairo March 7, 2011. Egyptian Christians protested against the church being set on fire, the result of a sectarian flare-up in a country already facing political turmoil, witnesses said. Some Muslims also joined the crowd of about 1,000 people who gathered outside the state television building. In 2013, around 100 churches, Christian establishments and homes were burned after Muhammad Morsi of the Muslim Brotherhood was deposed and the Egyptian military took control of the country again.

CAIRO (Christian Examiner) – A Coptic Christian Church in Minya, Egypt, burned down by the Muslim Brotherhood in the wake of the Arab Spring riots, has been rebuilt by the Egyptian military, the Egyptian news source Watani has reported.

Parishioners gathered at the church of Amir Tadros, or St. Theodore, to celebrate the church’s reopening Nov. 14. It was one of 100 Christian churches, houses and Christian establishments firebombed in the country during riots there in 2013, shortly after the Muslim Brotherhood took power – and then lost it after failing to provide essential civil services and wreaking havoc on the nation’s non-Muslim minority communities.

Muhammad Morsi, who led the Muslim Brotherhood, was recently charged with torturing his political opponents, but he also has been found guilty of helping more than 100 militant Islamists escape from prison during the 2011 revolts that ushered him into power. For that crime, Morsi has been sentenced to death.

Morsi deposed then President Hosni Mubarak, a long-time ally of the United States and a peacemaker with Israel.

In August 2013, the Algemeiner, a Middle East news source, said its Investigative Project on Terrorism had uncovered a memorandum posted on the Muslim Brotherhood’s Facebook page, showing a “clear call to incitement against Egypt’s Christian population, giving its blessing to the burning of churches.”

“The Pope of the Church (Coptic Pope Tawadros II) took part in the ouster of the first elected Islamist president. The Pope of the Church charges Islamic Sharia with underdevelopment [and] stagnation,” the memo from the Muslim Brotherhood’s Freedom and Justice, said Party said. “After all of this do people wonder why they burn churches? Burning houses of worship is a crime.”

“And for the Church to adopt a war against Islam and Muslims is the worst crime. For every action is a reaction,” the statement also said.

Al Qaeda’s leader, Ayman al-Zawahiri, said in a  shortly after the Muslim Brotherhood’s fall from power that Coptic Christians and Coptic Pope Tawadros II were to blame for ruining the Islamic vision for the country. Zawahiri, who has alleged the Coptic pope was trying to divide Egypt into two countries – one Christian and one Muslim – called Tawadros “head of the crusaders.”

“Those crusaders supported the overthrow of Morsi’s regime because its fall is a step in the way of establishing their Coptic state in southern Egypt. The crusaders could not endure Muhammad Morsi’s rule, despite his assertion that he was a president who did not differentiate between a Muslim and a Christian and that his state was based on citizenship, not religious belief. But they could not afford to see Egypt governed by a president associated with an Islamic group,” Zawahiri said.

On Sunday, Nov. 15, parishioners at the church celebrated Mass, with several church leaders in attendance.

By Steve Horn ALEXANDRIA, La. (LBC) - This year has brought about more challenges and cancellations than any of us care to recount. For those meetings and events that were scheduled, more times than not, they happened virtually rather than in person. This has been true for us as Louisiana … END_OF_DOCUMENT_TOKEN_TO_BE_REPLACED