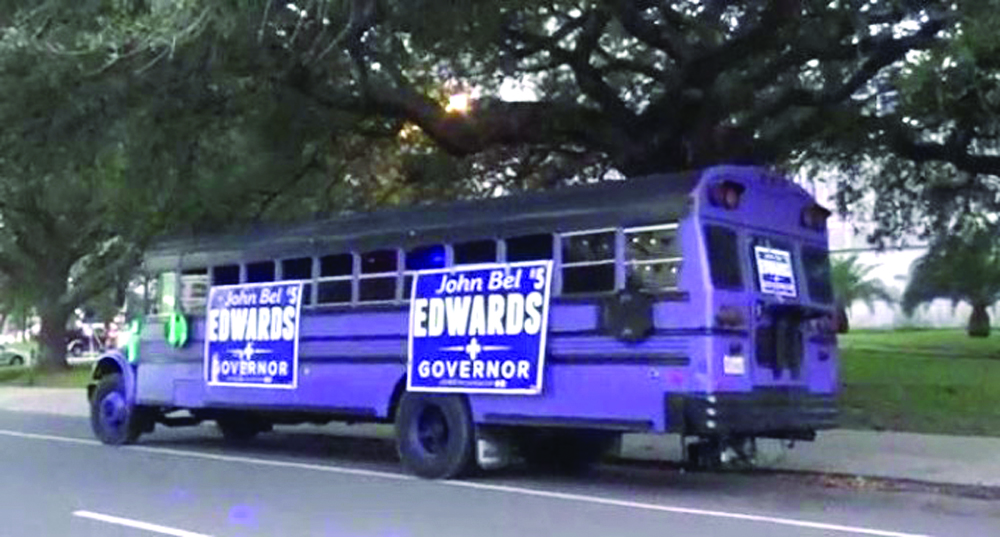 BATON ROUGE – Democratic gubernatorial contender John Bel Edwards decided not to join U.S. Senator and Republican gubernatorial contender David Vitter on stage at the historic Jefferson Baptist Church in Baton Rouge Nov. 12 for a debate organized to elicit the candidates’ views on a host of faith and family issues as the two men continue to campaign down to the wire in the race for governor.

It was the second night in a row Edwards was a no show.

The previous evening he snubbed an audience at the historically black Southern University, even though a regional news outlet described the campus as an Edwards-friendly setting.

Vitter not only showed up for the Southern University event, but took on some pointed questioning from the host, not backing down when pressed about using the word “thug” in a campaign ad. Vitter stood his ground and said the word was not racist, and, apparently some of the students agreed with him, according to a report in The Baton Rouge Advocate.

The New Orleans Times-Picayune, meantime, reported Edwards was attending a meet-and-greet event of about 200 supporters at the home of Barbara Anne Eaton, a prominent Baton Rouge realtor, at the time of the Southern University dialog.

Edwards’ whereabouts during the Thursday forum at Jefferson Baptist Church were much more suspect.

The Washington, D.C.-based Daily Caller, a conservative news and opinion website, published an article, highlighting Edwards’ campaign event at the Lyve Nite Club in New Orleans that afternoon, which included a bus ride and drinks for supporters who were taken to a precinct for early voting. 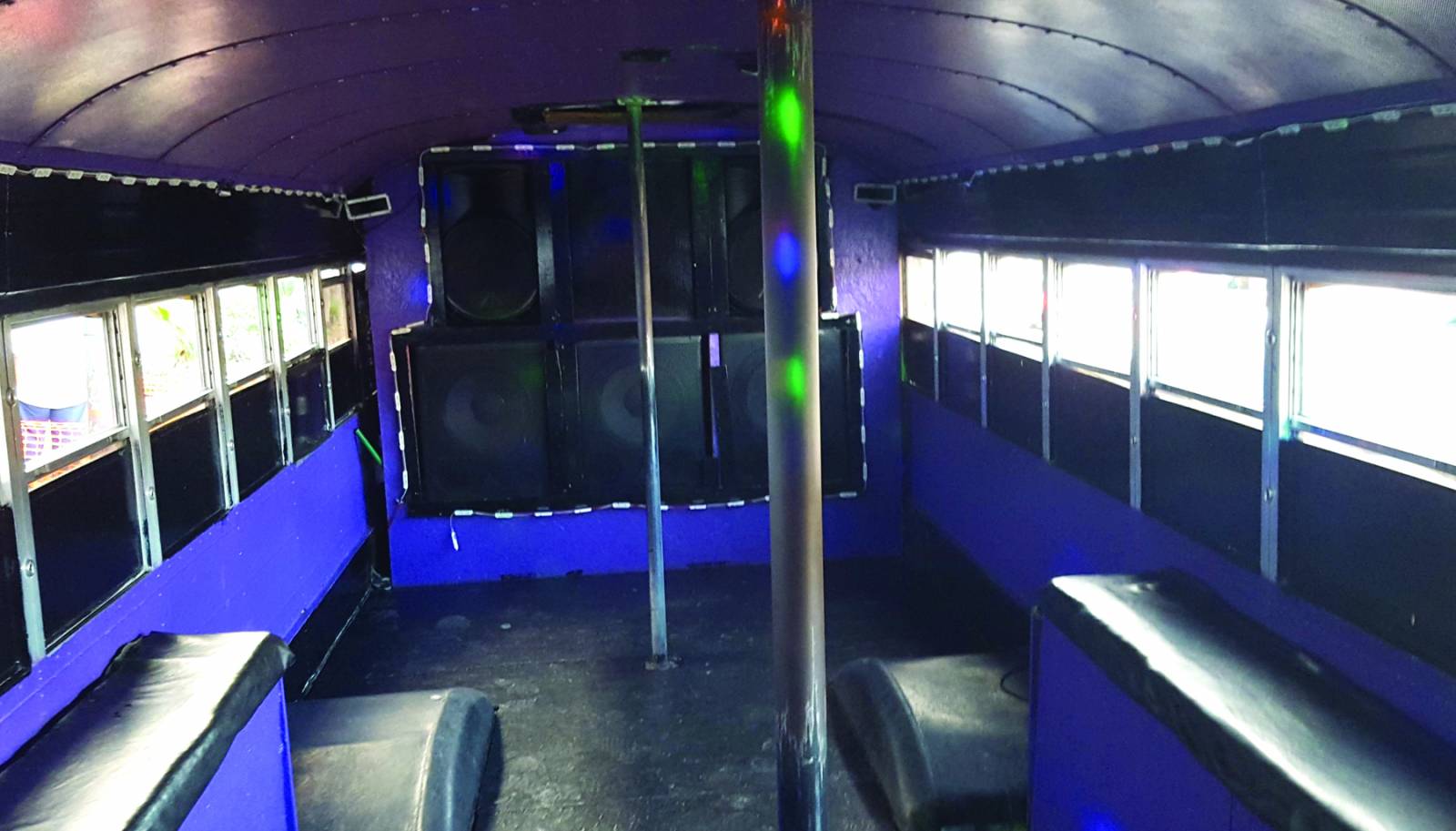 The purple-painted party bus included what was described as brass stripper’s poles as part of its interior motif.

The purple-painted party bus included what was described as brass stripper’s poles as part of its interior motif, and the club advertised the campaign event along with graphic ads of scantily clad women in risqué poses.

Reports noted there were no exotic dancers present when the group gathered at and departed from the adult-themed night club, but there were no follow up accounts about what took place during the ride or what happened after the party bus returned to the establishment.

Edwards’ has not explained why the 3 p.m. ride to the New Orleans polls prevented him from attending the 7 p.m. event in Baton Rouge, about 90 minutes away. 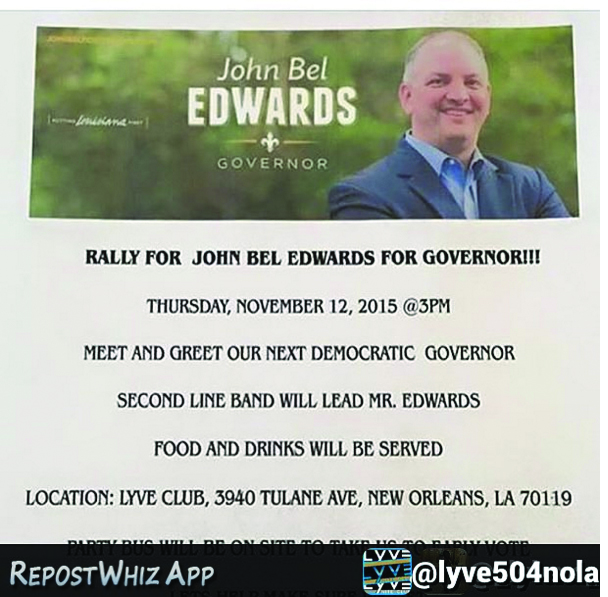 The Lyve Nite Club in New Orleans advertised the campaign event along with graphic ads of scantily clad women in risqué poses.

Meanwhile, Vitter was open and thorough in his responses to some detailed inquiries about how his beliefs would translate into policies.

In his opening statement, Vitter stressed he and Edwards differed “dramatically” in their voting records, political philosophies and approaches to governing, saying Edwards was trying to “perpetuate the myth” of being a conservative.

As proof, he pointed to the “perfect” score for his voting record from the National Right to Life Committee and Louisiana Right to Life and contrasted his endorsement by these groups to the “F” Edwards received from Louisiana Family Forum, a family issues advocacy group, while noting Edwards’ ties to abortion groups and leaders.

Vitter said it was important to move beyond personal claims candidates make about being pro-life and examine each man’s voting record to see if those personal views translated into actual pro-life policies.

He said it’s important not to just have a personal view on the matter but the next governor should be a champion for “protecting the unborn, fighting abortion.”

Media reports describe the project as a “supercenter” capable of performing nearly 3,000 abortions a year. The two Planned Parenthood centers now operating in the state do not perform abortions.

Vitter cited statements Edwards made in response to questionnaires in which the Democrat checked a box indicating abortions should be legal after the first trimester and a statement he typed saying his position is that abortion is “the freedom of choice, between the appropriate parties and their higher power.”

He indicated he would use any funds diverted from Planned Parenthood to provide women’s healthcare services through centers and clinics that do not offer abortions.

Vitter said he supported a bill proposed by State Representative Mike Johnson (R-Bossier City) during the last legislative session, The Marriage and Conscience Act, which would have prevented the state from forcing any person or group to act against their beliefs regarding marriage as the union of one man and one woman.

It also would have protected the certifications of Christian schools and ministries as well as businesses and nonprofits from being withdrawn because of such beliefs and policies.

He said he would work strongly to make Johnson’s bill a law.

Currently, Christians and others in Louisiana who have deeply held convictions about traditional marriage are protected by an executive order enacted after Johnson’s bill was defeated in committee.

“Make no mistake about it, those assaults are coming on churches and pastors and believers who are trying to live their faith in a quiet but important way, including in terms of how they choose to live their lives and run their businesses.”

He also pointed out Edwards “fought and helped kill” Johnson’s bill during the last legislative session by managing to table it so that the full legislature could not consider the measure.

Moreover, Vitter said he would favor expanding the measures in Johnson’s bill from just protecting citizens from state actions to also include protections from civil lawsuits like those faced by Christian bakers, photographers and florists across the country who have declined to participate in gay wedding ceremonies.

Asked about the recent ballot initiative in which Houston voters defeated (by 20 percentage points) what conservatives criticized as a “bathroom rights bill” for transsexuals, Vitter commented on it in context of a similar battle in Baton Rouge last year.

“I opposed that Baton Rouge ordinance. That was a heated battle as you know, and the outcome was not clear at the beginning,” he said.

He also offered his view that the proposed city bill “would have created special rights for a special class of citizens which would have led to certain views being really thrust upon, jammed down the throats of, others.”

Noting the openly lesbian mayor who had pushed for the controversial Houston measure had been thrown out of office by a huge majority during that vote as well, Vitter said he would be proactive to make sure any such proposed measure at the state level did not pass in the legislature. If such a bill did make it through both chambers of the state house, “I would veto it,” he pledged.

Vitter responded to questions about how his administration would respond to the devastating poverty rates in the states, saying poverty is a central challenge in the state.

“I believe the government should provide a safety net for the truly vulnerable,” he said. “My concern with many big government programs is that they go beyond that.”

“What starts as a very appropriate, well-intended idea of a safety net becomes a never-ending form of public benefit—something that encourages dependency.”

Emphasizing “faith, family and hard work,” he said any public assistance program for the “truly vulnerable” must assure “the basics of life” and then “get them on the road to success–to help them achieve their dreams.”

He also underscored education as a major part of his plan to deal with poverty, including skills training and vocational-technical education and other training.

Using presidential candidate Ben Carson as an example, he said Carson was a remarkable success story because “he came from a truly poor family—a single mom who couldn’t read.”

“But she was wise,” he added. “She understood the key to her kids’ future, and it was education” and she pursued that for them “relentlessly.”

“The key long term to our getting many Louisianans out of poverty is education,” he offered, stressing that early learning is critical. “I would focus like a laser beam on basics skills at early ages and early grades, and the basic early learning skill being reading.”

Vitter said at the other end of the age scale, he would ensure college is available to everyone, but also put resources behind technical training to offer other paths and opportunities to success.

Responding to whether his educational policies would be budget neutral, he said “they might be additive, but we can also subtract in some areas to make room for them.”

This was a key point to his economic plan.

“Budgeting is about priorities — setting and funding real and important priorities,” he said. “For too long in Louisiana, we haven’t done that. We have way too much of the budget off limits—constitutionally or statutorily dedicated—we can’t touch it the legislature can’t touch it.”

During the past six years, this resulted in across-the-board cuts to items not off limits in the budget, creating huge impacts in areas in just a few areas like higher education, he said. Consequently, he promised to lead an effort very early on in his administration for budget reform.

In closing, he shared insights about how faith has shaped him.

“My faith has always informed my life,” he shared.

“My faith was built around the story of redemption, and that’s the central tenet of my faith as it is I think of yours,” he told the audience.

The entire faith and family event can be viewed using the link at http://yourstreamlive.com/events/267741.

Both candidates offer information on their background and records on their respective campaign websites:

Finally, the early voting period has expired and the last opportunity to cast a vote for your governor candidate is on Election Day, Saturday, Nov. 21.

By Lane Corley Olive trees produce one of the most desired and sought after fruits around the world. The trees can live for thousands of years. The olive and the olive tree is spoke of in the Bible on numerous occasions. Including a few references to family life, like in Psalms 128:3 – “Your children will be … END_OF_DOCUMENT_TOKEN_TO_BE_REPLACED