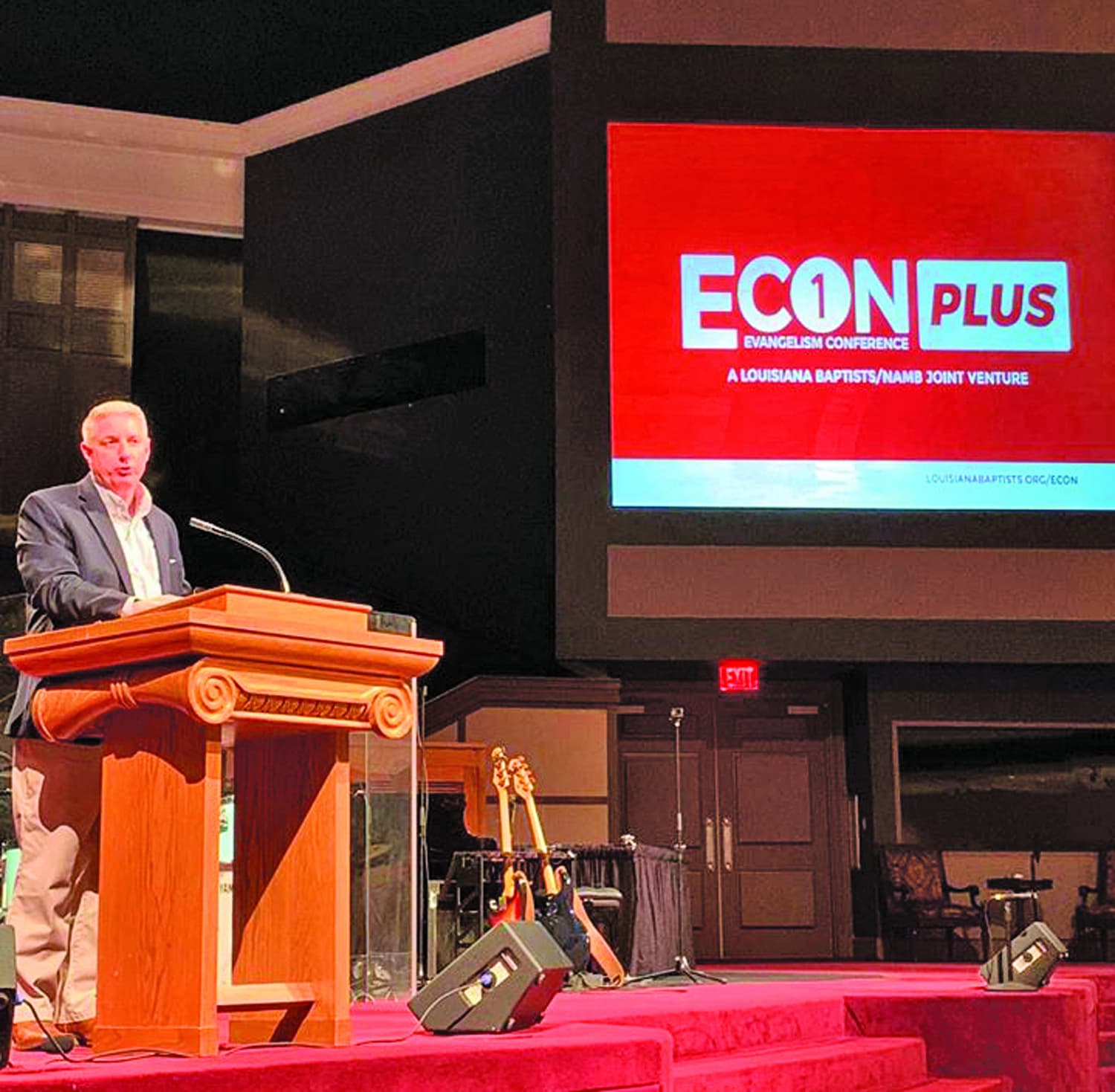 Johnny Hunt shared a simple solution he believes can reverse a continuous decline in baptisms throughout the Southern Baptist Convention.

If just 10 percent of the convention’s average Sunday morning worship attendance of 5.2 million people would reach just one person, the SBC would double their baptisms and baptize more individuals than they have in any single year since its founding, Hunt said during the Who’s Your One Tour stop, Sunday, Jan. 26, at Istrouma Baptist Church in Baton Rouge.

“I believe we can turn this around,” said Hunt, senior vice president of evangelism and leadership for the North American Mission Board. “I believe that with all my heart. It can happen.”

Hunt said in John 1, Andrew shared the Gospel with his brother, Peter. Likewise, Christ followers today should introduce their family members and friends to Jesus.

“Family oftentimes tells family how to get saved,” he said. “And friends don’t let friends go to hell without telling them about Jesus. We can turn things around in this nation if we just majored in two areas to start with: family and friends.”

The Who’s Your One Tour event featured a rally on Sunday, Jan. 26, at the Istrouma Baptist Church in Baton Rouge, as well as evangelistic workshops designed for pastors, church staff and lay leaders the following morning.

The tour stop immediately preceded the annual Louisiana Baptist Evangelism Conference in Lafayette as a means to combine the two training meetings to better equip Louisiana Baptists with the necessary tools to reach individuals with the Gospel in the state, organizers said.

In early 2019, NAMB and Southern Baptist Convention President J.D. Greear launched the Who’s Your One initiative to encourage and equip pastors with resources that can be used to challenge church members to focus on reaching one lost person. According to the Annual Church Profile database, Southern Baptist congregations baptized 246,442 people in 2018, a 3.02 percent decline from the 254,122 baptisms reported in 2017. The highest-ever reported number of baptisms was 445,725 in 1972.

Drawing his message from Jonah 4, Horn said that while Jonah had theological knowledge, initially he was unwilling to love those in Nineveh who were in need of God’s grace and forgiveness.

Much like Jonah, Louisiana Baptists must examine their hearts and remove any discontent toward sinners they may count as enemies. By doing so, they will have a purer heart as they strive to reach the state with the Gospel.

“No matter where a person is, no matter what a person has done, God loves that person,” Horn said.

Philip Robertson said in his message, based off Revelation 20:11-15, that God has given mankind warnings to avoid eternal separation from Him.

Robertson, pastor of Philadelphia Baptist Church in Deville, said that those who have accepted Christ must not let their guard down but instead have to be mindful of the coming storm that is the day when all of man’s sins are judged. On that day, those who reject Christ will discover hell is horrific.

“The Bible has given us a warning that hell is coming, but now we still have time to evacuate,” Robertson said. “And the place to evacuate is to the cross.”

Sharing from Mark 3:13, Jenkins said that a true disciple will live “a chosen life,” “a changed life” and “a commissioned life.” Moreover, Jenkins challenged the crowd to put aside all barriers to unity and to become fully devoted followers of Christ.

While Satan tries to use fear to deter Christ followers from sharing the Gospel, the Holy Spirit will equip them with the words to proclaim the Good News, said David Burton, president of David Burton Ministries in Jacksonville, Fla.

He said Christ followers should imitate Philip, who tapped into the power of the Holy Spirit to share Jesus with the Ethiopian Eunich in Acts 8.

“There is not a person who is saved in this room who cannot go out and find somebody who does not know Jesus,” he said. “When you got saved, you got baptized with the Holy Ghost.”

Christ followers will face difficulties in life, but those tough times must be met with an attitude of determination, not defeat, former Navy SEAL Chad Williams said. Basing his message off Exodus 3, Moses was dealt continuous setbacks and ended up in the desert. In the end, Moses overcame through God and became victorious.

The members of First Baptist Church in Sutherland Springs, Texas, could have chosen hate in the days following a deadly shooting that killed 26 people Nov. 5, 2017, but they instead chose hope and love, the congregation’s pastor told the ECON 2020 crowd.

Pomeroy, pastor of First Sutherland, shared that his members continued to show Christ’s love and consequently saw a spiritual harvest they had not experienced before. Since the shooting, Pomeroy has baptized 30 converts, and average worship attendance has increased from 50 during the first few weeks after the shooting to around 175 in late 2019.

“We chose Christ in the midst of adversity,” Pomeroy said in his testimony. “We chose to continually stand upon the Word of God. If you will cling to the hem of his garment, no matter what the tragedy may be, there is glory on the other side.”

By Joe McKeever Freely you have received; freely give. (Matthew 10:8) JACKSON, Miss. (BP) -- Dr. Watson was complimenting Sherlock Holmes on a brilliant observation no one else had noticed. "Of course," Holmes remarked. "It's what I do." Forgiveness and grace -- that's what we believers do. Here is … END_OF_DOCUMENT_TOKEN_TO_BE_REPLACED