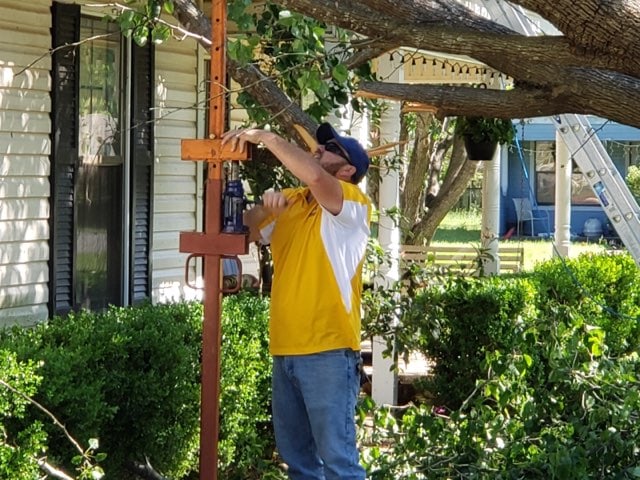 Tobey Wilemon, blue hat with the Blanchard Disaster Relief team helps clear a tree of a home damaged by a powerful storm that swept through the Shreveport-Bossier City area April 13, 2019. Craig Bond photo

BLANCHARD (LBM) – Hours after powerful storms tore through the Shreveport-Bossier City area Saturday, April 13, members of a Louisiana Baptist were on the ground responding to residents whose property was damaged.

Tobey Wilemon, blue hat of the First Baptist Church of Blanchard disaster relief team, and a few other team members helped clear off a tree that fell on the house of a resident in the community and helped install shingles that were damaged by the storm. Later, the team members placed a tarp on the roof of a damaged home.

The team also distributed five Bibles and a case of bottled water to residents of the neighborhood.

Wilemon said all they encountered were grateful for the assistance.

“Everyone was very open and friendly,” Wilemon said. “They seemed to be in high spirits considering what just happened. They were glad it wasn’t any worse.

“They weren’t focused on what could have been and what just happened,” he continued. “They were focused on the fact that it’s just stuff. There was no physical damage or loss of life and for that they were thankful.” 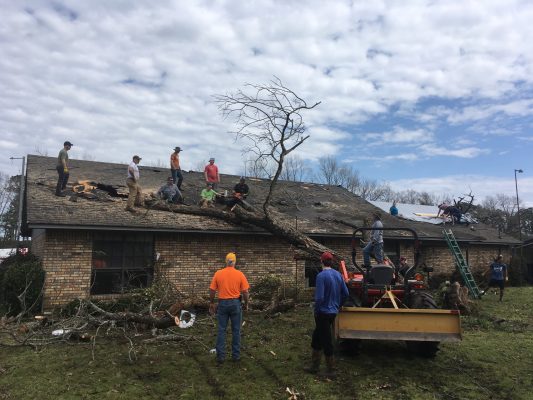 Blanchard Disaster Relief team members help others clear off a tree that fell on a home north of Shreveport April 15, 2019. Craig Bond photo

By Lane Corley Olive trees produce one of the most desired and sought after fruits around the world. The trees can live for thousands of years. The olive and the olive tree is spoke of in the Bible on numerous occasions. Including a few references to family life, like in Psalms 128:3 – “Your children will be … END_OF_DOCUMENT_TOKEN_TO_BE_REPLACED