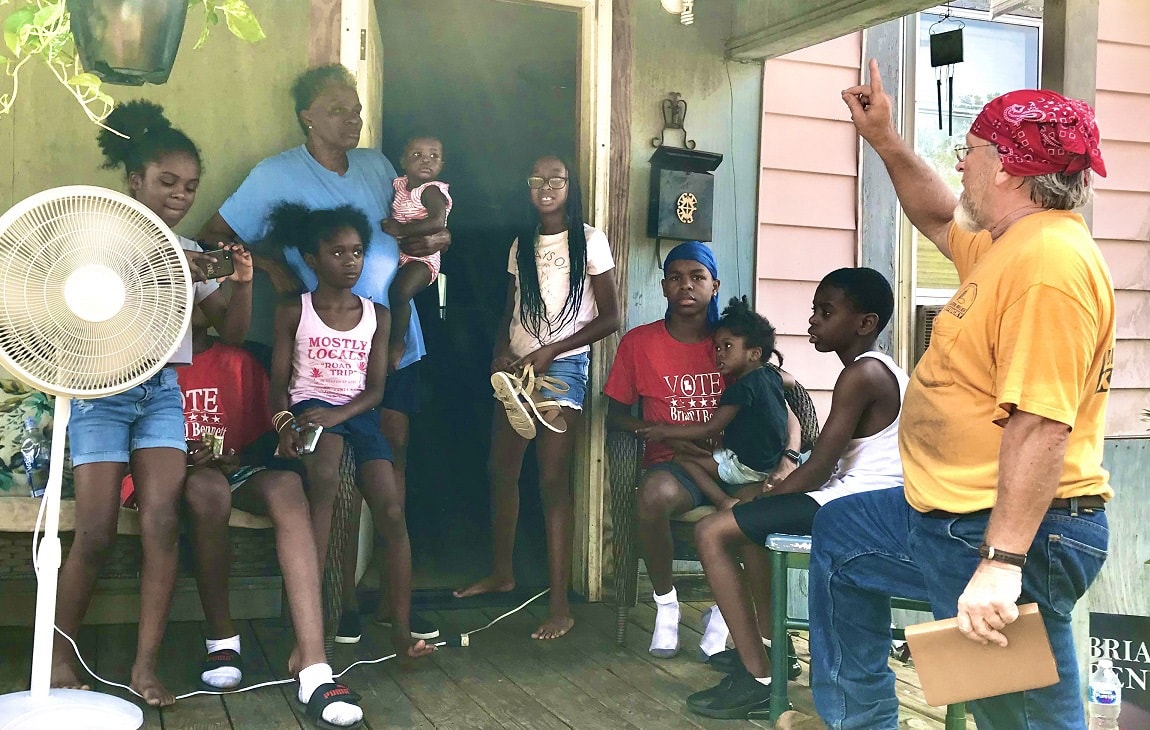 A grandmother giving care to eight grandchildren and who had suffered house damage from Hurricane Laura said she just wanted 'that people would love each other' when asked by Jeff Free, a member of Kentucky Baptist Disaster Relief, about her prayer needs. She then had all the children join hands with her and the chainsaw team to pray.

ALEXANDRIA, La. (LBM) – While racial tensions continue to claim national headlines, the multi-state disaster relief response to one of the largest hurricanes ever to make landfall in the country is serving as an opportunity to build goodwill between ethnic groups in storm-affected parts of Louisiana.

Hurricane Laura came ashore in the state with 150 mph winds and maintained its ferocity far inland, with tropical storm winds of 50 mph, gusting to 85 mph, recorded in Alexandria, about 130 miles north from where the eye of the storm struck the coast. The winds knocked out power to 579,000 homes and businesses in the state, but the total devastation in terms of lost homes and businesses has not yet been tallied.

In Central Louisiana, comprising 10 parishes, Louisiana Baptist Disaster Relief, alone, has received 900 calls for help regarding damaged homes and property during the first week after the storm. The enormous response, especially by a predominately white Southern Baptist Disaster Relief organization, has alleviated many physical needs, but it also has brought some racial healing.

Bob Thomas, a member of Highland Baptist Church in Senatobia, Mississippi, experienced a moment of grace and growth on Saturday morning.

He and his wife, a white couple, are damage assessors with Mississippi Baptist Disaster Relief, and on their first deployment in this role.

“We knocked on the door and Bev began walking around the house,” he recounted, adding that they had called ahead so the family would be expecting them.

“A black lady came out and we began to talk about what needed to be done,” Thomas said. “After a while she said, ‘I need to tell you something. I don’t mean to embarrass you, but you need to hear this. I grew up in Louisiana and have lived here all my life, and people always tell me “Don’t ever trust anybody from Mississippi, especially white folk.”’

“She said, ‘I don’t mean to hurt anybody by it. But just wait. Now I can tell them that a white guy from Mississippi came and helped me – that we were going through this hard time — and that they were wrong,’” he said, recalling her renewed hope.

Jeff Free, a member of Buck Creek Baptist Church in Calhoun, Kentucky, and a white volunteer with Kentucky Baptist Disaster Relief, said there were three girls outside the house (an African American home) who started jumping up and down and clapping as he and his wife, Sandy, drove up with a chainsaw team.

“My wife looked at me and said, ‘We’ve got to do something for this family,’” he shared. Earlier, they had been advised that the limb hanging on the roof was big and that the job might need to be assigned to another team with a lift.

After looking over the situation, the team concluded they could not remove the huge trunk using just the equipment they had with them.

“But we did what we could do. We cleaned the yard up, trimming back the large tree as high as we could reach. We also cleaned up the other debris in the yard and the backyard,” Free continued.

“We always sign a Bible for each job we complete with all our names in it and identify the disaster we are responding to and include “Kentucky Baptist Disaster Relief,’” he said. “So, we got ready to leave and I told her what we had been able to do. I gave her the Bible and asked her if we could pray with her.

“She was watching eight grandkids, and she said, ‘Wait a minute,’” Free told the Baptist Message, “and she came back with every one of them. One was 18 months, there was a three- and a five-year-old — all the way up to the oldest, a young man who looked about 14.

“I asked her, ‘Is there anything we can pray for you?’” he said, and he was deeply moved by her reply. “All she said was, ‘That people would love each other.’

“I was thinking: She is in a dire situation; the house was not in that great of shape; and, she had all these kids — and all she wanted us to pray was for people to love each other,” Free said. “Just before I began, she told everybody, ‘Grab a hand.’”

Stuart Sasser is the campus pastor for Philadelphia Baptist Church, Horseshoe Drive, in Alexandria, (a predominately Anglo congregation) where lodging, food and other support is being provided for up to 100 workers with Southern Baptist Disaster Relief teams from all over the country.

During the course of photocopying some materials for a damage assessment team, one of the volunteers caught him by the arm to offer concerns about an African American grandmother who had seven members of her extended family staying in her home – six kids and an adult daughter.

She had lost all the food in her refrigerator due to the area-wide power outage, and, her roof had two large holes from the storm.

The disaster relief worker told Sasser that the woman was a believer and needed some help beyond tree removal and a tarp for the roof.

“His heart was breaking,” Sasser said. “We just felt like this was a divine appointment — that God was bringing her to our attention – and we knew we had to take action.”

“I got to know her a little bit by phone, and she let me know her favorite place to shop was Mac’s Fresh Market,” Sasser detailed. “She had access to a car and we agreed to meet there.”

The woman’s sister came with her and seemed to show skepticism in her facial expression, Sasser said. “She did not smile a lot.” But the woman with the empty refrigerator was fully trusting and impressed Sasser by the fact that in trying to be a good steward she was buying generic brands of foods.

“She was so gracious and so thankful, I just wanted to do more than the budget we had set,” he offered. “I wanted the children to have some ‘magically delicious’ cereal and Pop Tarts and other things that I know my kids like to eat. So I let her spend what we had discussed and I added these other things on top of her cart,” while letting her know these were a gift, too.

In the parking lot, the sister’s attitude was different – her countenance was hopeful, grateful, Sasser said. He invited them to pray and they saw a lady friend coming out at the same time and invited her to join hands with them.

“We all realized we were still in the midst of a pandemic and someone asked, ‘Does anyone have any hand sanitizer?’” Sasser noted. “But the woman said ‘Don’t worry — the Lord’s got this.’ So we joined hands and gave thanks.”

— Pray that the disaster relief response will serve as a catalyst for transformation in the midst of the disaster.

— Participate by joining a disaster relief team; volunteers are needed!

— Donate, knowing that funds you contribute for disaster relief will go directly to the response effort.

By Joe McKeever RIDGELAND, Miss. – “You shall know that the Lord has sent me to do all these things, for this is not my doing” (Numbers 16:28). “Lord, God of Abraham, Isaac, and Israel, let it be known this day that You are God in Israel and I am Your servant, and I have done all these things at Your word” … END_OF_DOCUMENT_TOKEN_TO_BE_REPLACED