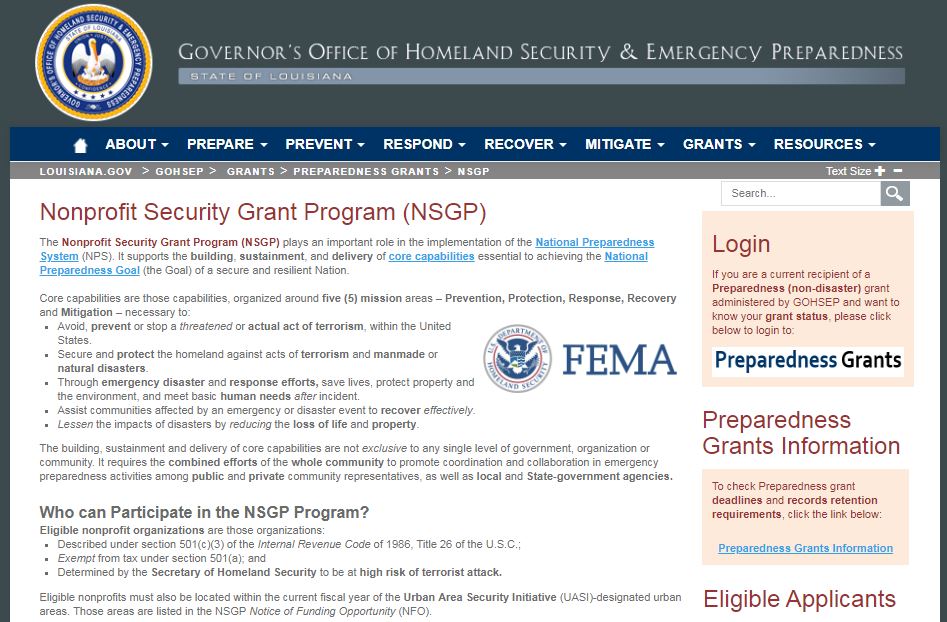 ALEXANDRIA, La. (LBM) – The Department of Homeland Security has announced that it will be accepting requests starting either April 12 or April 16 for grants to be used to upgrade the security of facilities of nonprofits such as churches and religious schools to deal with the continuing threat of violence against such institutions because of their “ideology, beliefs or mission.”

The U.S. Congress provided $60 million for the FY19 program, which also covers synagogues and mosques, and Louisiana is expected to receive about $200,000 to $300,000 of that allocation. Last year, the state approved four grant requests, a state official told the Baptist Message.

Examples of items that are allowable for the funding include costs related to:

The state will issue the exact process to follow when the official announcement is made either April 12 or April 16.

However, the first step that should be taken immediately is to apply for a Data Universal Numbering System (DUNS) number via the following link: http://www.grants.gov/web/grants/register.html.

Obtaining this identifying number for the nonprofit is mandatory and it takes weeks to receive. Churches and religious schools should not delay in applying for this number while awaiting the announcement.

Already, the state has sent a notification that a vulnerability assessment will be required and a form has been developed by a DHS coordinator for Louisiana churches to use: http://vulnerabilityassessmentform.pdf.

This part of the process can be started now.

In the past, nonprofits have been required to provide a strong investment justification that clearly identifies risks and vulnerabilities, includes a vulnerability assessment; details any threat incident (with police reports, photographs or other evidence); explains how the grant will mitigate or otherwise address a vulnerability and is an allowable  cost; outlines milestones; and, gives the project manager’s experience level. That form will be provided when the official announcement is made.

Here is a SAMPLE Investment Justification form from previous years to use as information purposes only until the actual revised form is issued:

Additionally, a budget will need to be included in each application package (a budget template will be provided when the official announcement is made) and a mission statement that shows the ideology or beliefs that make the nonprofit a target for violence.

The Governor’s Office of Homeland Security and Emergency Preparedness will provide contact information for help in completing the application process when the official announcement is made.

IMPORTANT: Churches and religious schools will not compromise the religious freedoms of their faith-based institutions for applying and accepting any DHS funding for this program.

For more information, visit the Louisiana Baptist website. DHS offers a webinar that can be accessed here and documents containing more information may be downloaded from here.

By Waylon Bailey Recently, I saw a tweet on Twitter that asked the question, “What would Jesus do in the midst of a worldwide pandemic?” No answer to the question was given, but the author obviously had an agenda and a suggested answer. The good news is that it led me to really ask, “What would Jesus … END_OF_DOCUMENT_TOKEN_TO_BE_REPLACED