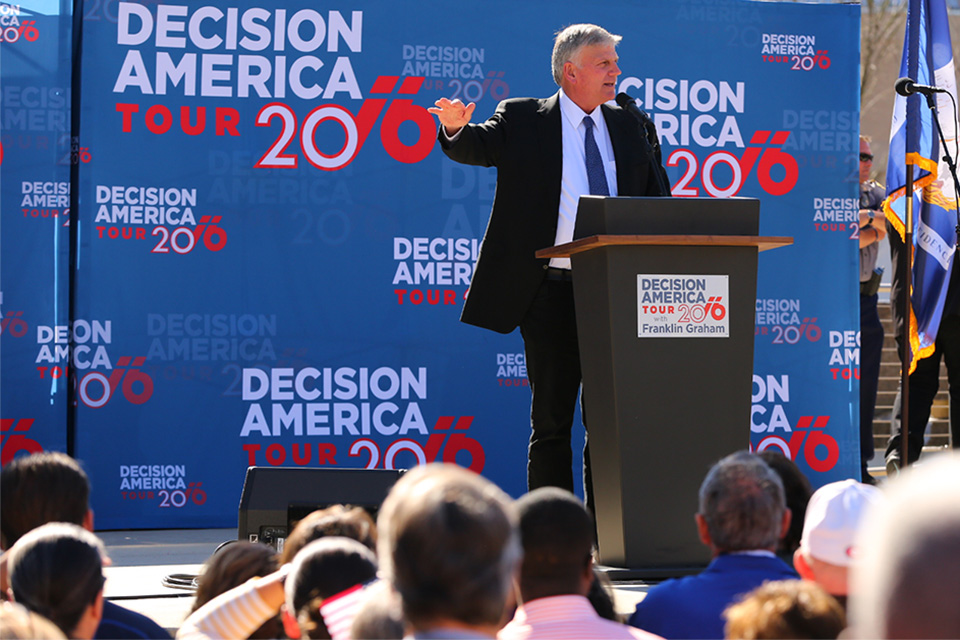 BATON ROUGE — Franklin Graham has never been tight-lipped about his age.

Yet, even with decades between him and some of the attendees at the latest Decision America prayer rally, a connection resonated.

“I look at my grandchildren. They’re not going to have the same country that I grew up in,” Franklin said. “That’s why I’m doing this tour.

“… My father, when he went to school, they still had the Ten Commandments on the wall. The teachers still led the Lord’s Prayer with the entire class. They still said the Pledge of Allegiance,” he later added. “Now this is gone.”

That reality is driving much of the passion behind Decision America. Baton Rouge marked the third stop on the 50-state tour urging Christians to live out their faith and pray for our nation.

Local resident Linda Clark is a home-school teacher and brought her eight highschoolers.

Clark doesn’t typically follow Franklin Graham or the Billy Graham Evangelistic Association. She simply saw a post from a friend on social media about the Decision America Tour and knew it was something her students should see.

“I think they realize how fast our nation is just declining and getting away from God,” Clark said. “They’re the hope … to turn America back to Him and evangelize.”

A few steps over stood another group of students—all in uniform from Gardere Community Christian School. The small private school, funded entirely by donations, serves young people in one of the roughest areas of Baton Rouge. Parents pay little to nothing for their children to attend.

Program coordinator Cheryl Lott wanted some of Gardere’s sixth- to eighth-graders to experience the Decision America rally and “show them God’s people need to come together for our country.

“At first we thought, ‘Is this going to mean anything to them?’” Lott admitted. “But I remember as a child seeing Billy Graham.

“And so we hope they have that memory [of being here today], and then later whenever they hear the name Franklin Graham, they’ll perk up and pay attention to what it’s about because they have a connection.”

Lott prays that, even years from now, this connection will help them stay true to the message behind Decision America—boldly standing for God in every aspect of life.

“We’re in the middle of a huge shift in this country, and unfortunately it’s not shifting the right way,” she said. “I believe this is the key. These kids are the key.

“If we can pour the Word of God into their hearts and let God do His work, they’re the ones that are going to be the leaders of tomorrow.”

Aminga Maxie was also encouraged by the number of youth at the rally. With her husband running for a seat on their district’s school board—something Franklin Graham is urging more Christians to do on the Decision America Tour—she holds the next generation dear.

“They need to have that foundation. They need to know that it starts with just one person,” Maxie said.

“This very moment, for a young person to see the legacy that Billy Graham [passed on] to his son, they can take that and say, ‘Wow, I can do all things through Christ.’”

Maxie is one of several local volunteers who worked tirelessly ahead of Wednesday’s prayer rally. (You can also sign up to volunteer for your state’s Decision America Tour rally.)

“We’ve been spreading the word at work, at our churches, and even telling people, ‘You may not be able to be here, but please just touch and agree in your heart,’” she said with a smile.

“It’s great to be able to stand here today and say we’re going to ask for forgiveness and be the salt and light,” volunteer Pamela James added. “Our city needed a change. The church needed to wake up.”

By Steve Horn ALEXANDRIA, La. (LBC) - This year has brought about more challenges and cancellations than any of us care to recount. For those meetings and events that were scheduled, more times than not, they happened virtually rather than in person. This has been true for us as Louisiana … END_OF_DOCUMENT_TOKEN_TO_BE_REPLACED