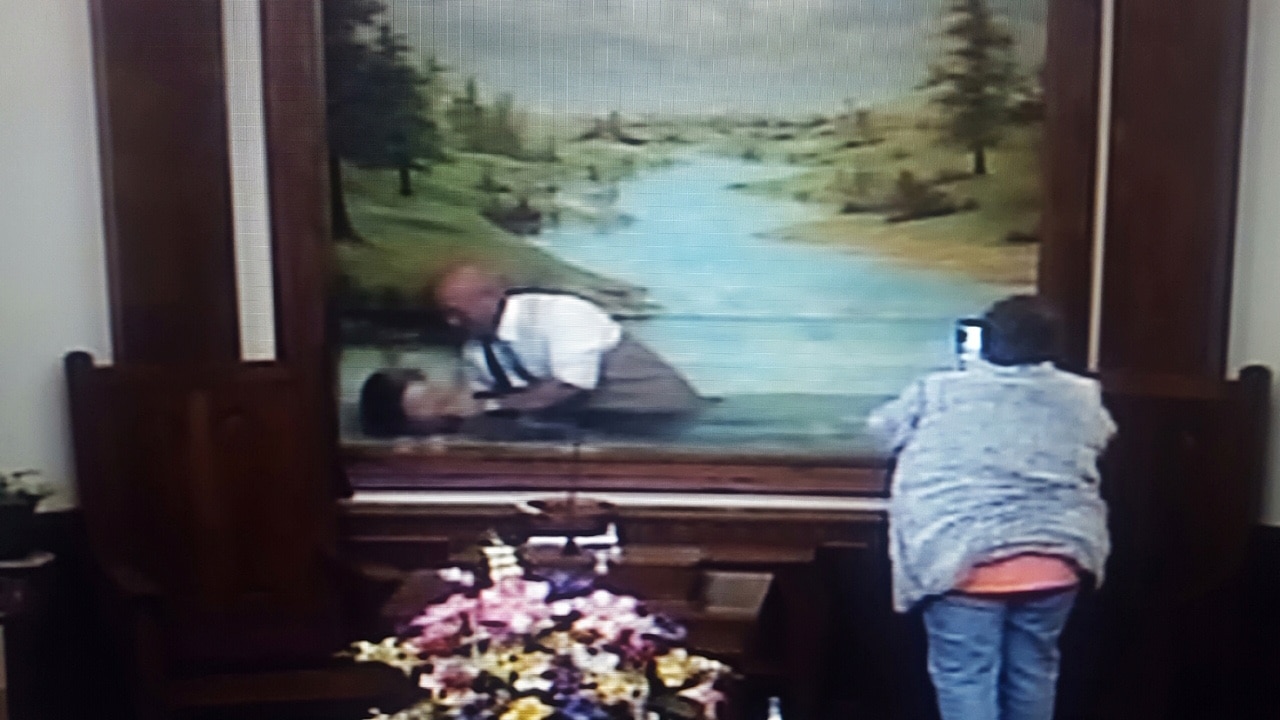 Sharon Ferrington is among 25 new believers who have been baptized at First Baptist Church in Gilbert since January.

GILBERT – Sharon Ferrington’s heart went cold after her boyfriend passed away in February, but the Christ-like legacy he left behind combined with a profound question by her sister, Susan Hill, made Ferrington consider her eternal future.

“She asked me, ‘If you died today, would you go to Heaven?’ and I told her, ‘I’m not sure because I’m not saved,’” Ferrington recalls of the September conversation. “That’s when I knew I needed to follow Christ.”

She repented for salvation and that same month was baptized.

Speaking to the Baptist Message Ferrington recalled her emotions afterward.

“My baptism left me with this overcoming peace,” she said. “I wanted to throw my hands up and say, ‘Praise the Lord.’ God took a black hard heart, wiped it with red blood and it came out white.”

Ferrington is among 25 new believers who have been baptized at First Baptist Church in Gilbert since January. The baptisms give a glimpse of the revival First Baptist has experienced since Pastor Bubba Ezell arrived in October 2016.

Before then the congregation averaged about 25 worshipers in Sunday morning services, and baptisms were a rarity. Two years later, attendance has more than quadrupled and 55 converts have been baptized.

“Ministry can be tiring for any pastor, but this is what inspires me to get up and share God’s love,” Ezell said. “God can use anything in the world and He chose us to be that city on the hill. When people come to our church they feel the presence of God. Our church, with the help of youth pastor Dustin Carroll, has totally flipped from a church that was down to just a couple of dozen and has grown to where we have to find chairs many Sundays to accommodate all the people wanting to get a seat. There’s no question that what’s happened here is a mighty move of God.”

Ezell attributes the numerical increase to his congregation’s growing spiritual presence in the community, touching lives through an addiction ministry and a sprawling youth ministry.

Ministering to addicts is highly personal for Ezell, who found Christ while as a patient at a treatment facility in Logansport in 2013. Just as he saw his need for Jesus when he hit rock bottom, Ezell said many in his community are struggling with addictions and Christ is their only hope.

Since he became involved in ministering to addicts at treatment centers and jails across north Louisiana in 2015, Ezell has seen 815 people come to a relationship with Christ. Some of them have gone on to help other addicts through the church’s Amazing Grace Ministries.

Through this ministry, men receive encouragement and tools to overcome their additions. During the first two months the men are under constant supervision by the staff at the transition house. They must attend Bible studies, Celebrate Recovery meetings, worship services, substance abuse classes and discipleship training. After that the men move on to the job phase, where they are helped in finding work so they can save money to better position themselves to succeed after they leave the six-month program.

Ezell dreams of expanding from the 14-person capacity of their current group home to facilities that have room for up to 50 men.

“Our vision is to take these guys in and sow what we have into their lives,” Ezell said. “Our church loves on them and tries to teach them what they need to have victory in Christ. We’re a small country church with a big heart for God.”

By John Hebert, Louisiana Baptist missions and ministry team leader ALEXANDRIA, La. - “By faith Abraham, when he was called, obeyed by going out to a place which he was to receive for an inheritance; and he went out, not knowing where he was going.” (Hebrews 11:8) This verse describes the exercise of faith … END_OF_DOCUMENT_TOKEN_TO_BE_REPLACED