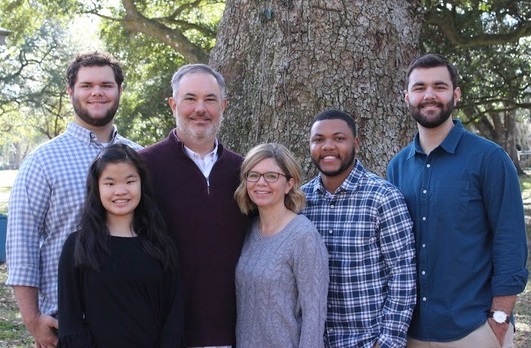 ALEXANDRIA (LBM)— David Jeffreys, associate pastor of the Highland Baptist Church in New Iberia, will be nominated for first vice president of the Louisiana Baptist Convention during the 2020 annual meeting.

David Denton, pastor of the Highland Baptist Church in New Iberia, will nominate Jeffreys and he sent an endorsing statement to the Baptist Message, Oct. 27, highlighting Jeffreys’s “years of ministry experience” and “wisdom” as well as his “heart for Louisiana Baptists.”

The LBC annual meeting schedule has been abbreviated to a single day, Nov. 10, 12:45-5 p.m., in Guinn Auditorium on the campus of Louisiana College in Pineville.

Denton noted that he has known Jeffreys since high school in Slidell, adding that they were roommates at Louisiana College.

“David took his first ministry position as youth pastor while a student at Louisiana College and he has been serving the local church ever since,” Denton said.

“I have been privileged to observe David in his role as associate pastor at Highland Baptist Church where we have served together for the last 14 years,” Denton added. “David has led with strong conviction at Highland and has modeled integrity and a love for Jesus at our church and school. He is fully invested in the people, able to strike the balance between his duties as a pastor and personal time with members, and comfortable leading a committee or rubbing shoulders with members in the hunting blind.”

The database of the Annual Church Profile shows that Highland Baptist Church in New Iberia contributed $74,624 for cooperative missions and ministries through the Cooperative Program, 5.7 percent of undesignated receipts totaling $1,312,999 from Sept. 1, 2019-Aug. 31, 2020. The congregation also gifted more than $37,129 in 2020 to the Evangeline Association. In all, the congregation’s Total SBC Giving amounted to $145,453 on Total Receipts of $1,454,466.

Jeffreys told the Baptist Message that he was humbled and surprised to learn about the intended nomination, and after praying was “willing to be nominated and serve at the will of the Convention.”

“I would consider it an honor to work with Dr. Cranford and assist him in whatever I can do,” Jeffreys said. “Louisiana College is definitely a passion of mine. I’m just now rotating off the board of trustees after having served in that capacity for the past six years. Definitely the Louisiana Baptist Children’s Home is near and dear to my heart, as well, with adoption and a lot of the different ministries that they provide. Both of those ministries of the state are very big passions of mine.

“If elected, I would take this responsibility very seriously — as a calling just as I take everything else in my life,” he explained. “I would seek to serve with reverence and prayer and humility.”

Jeffreys earned the Doctor of Philosophy and the Master of Arts, both in Christian Education, from New Orleans Baptist Theological Seminary, and his bachelor’s degree from Louisiana College.

He has served the national and state Baptist conventions in a variety of positions, including membership on the Southern Baptist Convention Committee on Nominations (2010) and the Louisiana College Board of Trustees (2014-present), serving as trustee chairman since 2019.

He is the director of the NOBTS Southwest Louisiana Extension Center (2015-present) and a NOBTS adjunct faculty member (2002-present).

Denton said Jeffreys offers “strong and steady leadership,” adding, “He has served the Convention well in numerous capacities and has a broad range of leadership experiences.

“But the most significant reason I am nominating David is because of what I know of him personally,” Denton offered. “The cooperative work of Louisiana Baptists will be well served by the character and experience that David will bring to the position of vice president.”

By Tim Patrick DERIDDER, La. – Many of you know we lost our oldest son in October. David was an IMB (Southern Baptist) missionary. His death gives me an inside view that many of you do not possess. This year, that view carries greater weight than ever. I share this view with you so that (hopefully) you will … END_OF_DOCUMENT_TOKEN_TO_BE_REPLACED