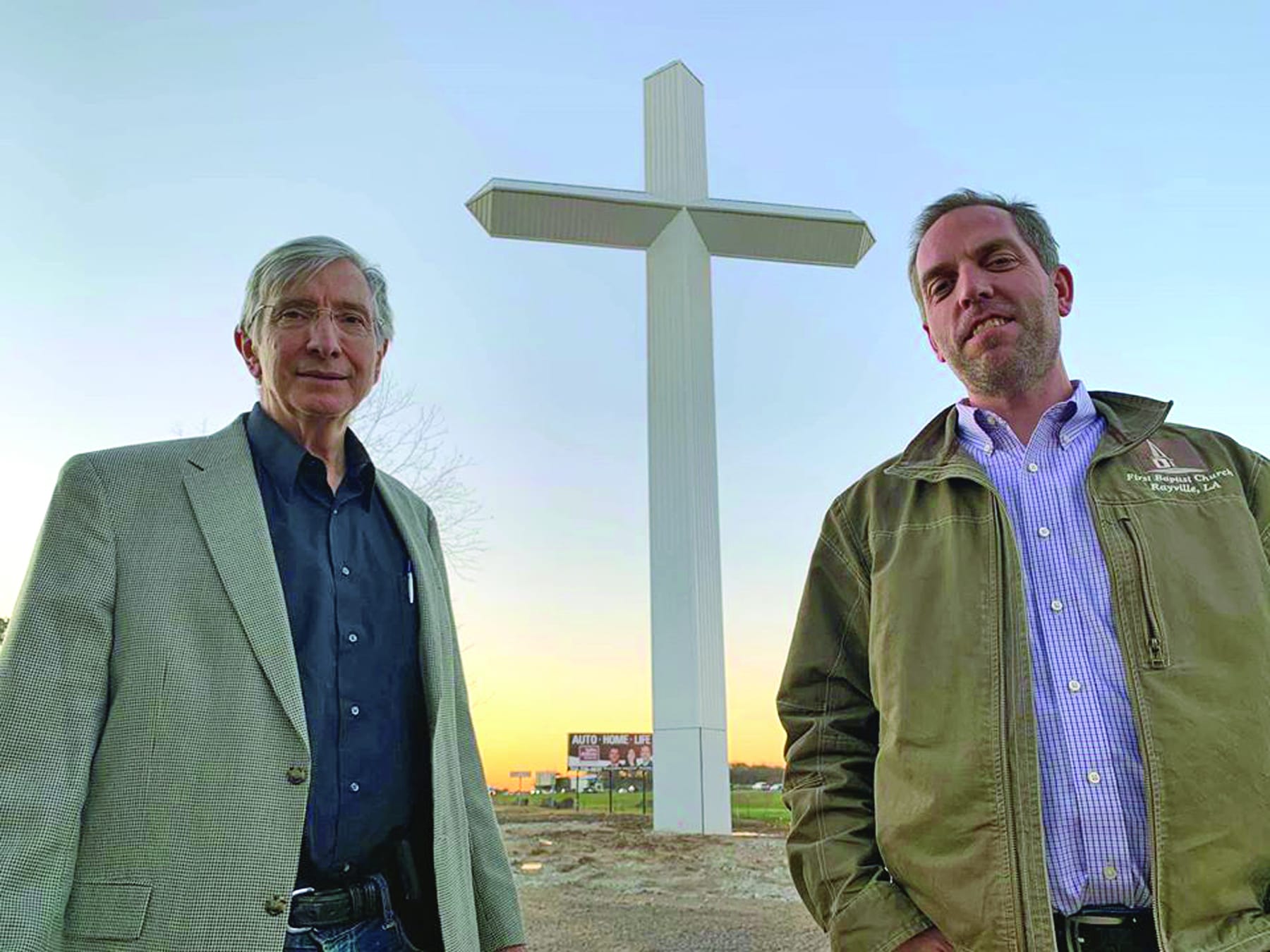 Joe Bruynickx and Eddie Wren saw a dream of the late Timmie Ray Thames become reality when a 120-foot cross was placed Nov. 6 near the Interstate 20 exit in Rayville. Thames, a member of First Baptist Church in Rayville, died in August.

RAYVILLE, La. (LBM)–The community of believers in Rayville has erected a 120-foot cross near Interstate 20 to remind motorists that Jesus watches over them.

The cross, which can be seen up to two miles from its location, was envisioned in 2017 by Timmie Ray Thames, a member of the First Baptist Church in Rayville. Thames was inspired after having noticed electrical wires near his backyard form the image of a cross.

Several months passed and on Aug. 21, 2017, Thames’s longtime friend, Joe Bruynickx, noticed a giant cross on the side of Interstate 55 in Batesville, Mississippi. The friends previously had discussed different varieties of crosses, but Bruynickx said God revealed to them at that moment they should place the same design in Rayville.

“I was on my way back from the solar eclipse in Missouri and called Timmie Ray to help me stay awake on the drive home,” he recalled. “We had finished discussing the eclipse when Timmie Ray made the statement that ‘I just don’t know if God is in this.’ It was at that very moment that I noticed the cross at Batesville, and I was stunned and awe struck, as was Timmie Ray when I told him what I was witnessing. I snapped that picture and sent it to him.  We both then knew what God wanted done. To drive to that point at Batesville after traveling many, many miles of bumper to bumper traffic on I-55 and to be at the location of the cross at the very instant TR made the statement—that was a God moment.”

After further conversations with Bruynickx, a member of Sacred Heart Catholic Church in Rayville, and Eddie Wren, pastor of the First Baptist Church in Rayville, Thames pitched the idea to his fellow members, and the quest to raise the needed $200,000 began.

“Through this process, I have been shown so many times God is in this venture,” Thames said during the April 7 worship service broadcast on the church’s Facebook page. “A door will open at just the right time. People will step forward at just the right time. It’s been amazing. There is no doubt in my mind whatsoever this is a calling.

“All of us are called to be a witness,” he continued. “The cross will stand as a witness that this community is a Christian community and is a good place to raise your children with good Christian morals and Christian faith.”

Thames passed away in August, and during his funeral multiple people mentioned his vision to erect the cross, Wren said. Afterwards more than $50,000 was given by those who had attended.

“His dream became a reality as the community really rallied around it,” Wren told the Baptist Message. “It’s inspiring and amazing to know a bank here donated the land and so many people got behind this effort to give money because of one man’s idea from God.

“This wasn’t a First Baptist thing but a community effort involving many churches, businesses and people,” he continued. “Mr. Timmie Ray was an inspiration to our community and so many people loved him. I miss him, but I’m thankful that the vision the Lord pressed upon him became reality.”

By John Hebert, Louisiana Baptist missions and ministry team leader ALEXANDRIA, LA. (LBM)--Do you know what Winston Churchill, Bill Gates, Walt Disney, and Colonel Sanders have in common? It has nothing to do with their fame or notoriety, I would suggest. Instead, it is the trait that I contend was the cause of … END_OF_DOCUMENT_TOKEN_TO_BE_REPLACED