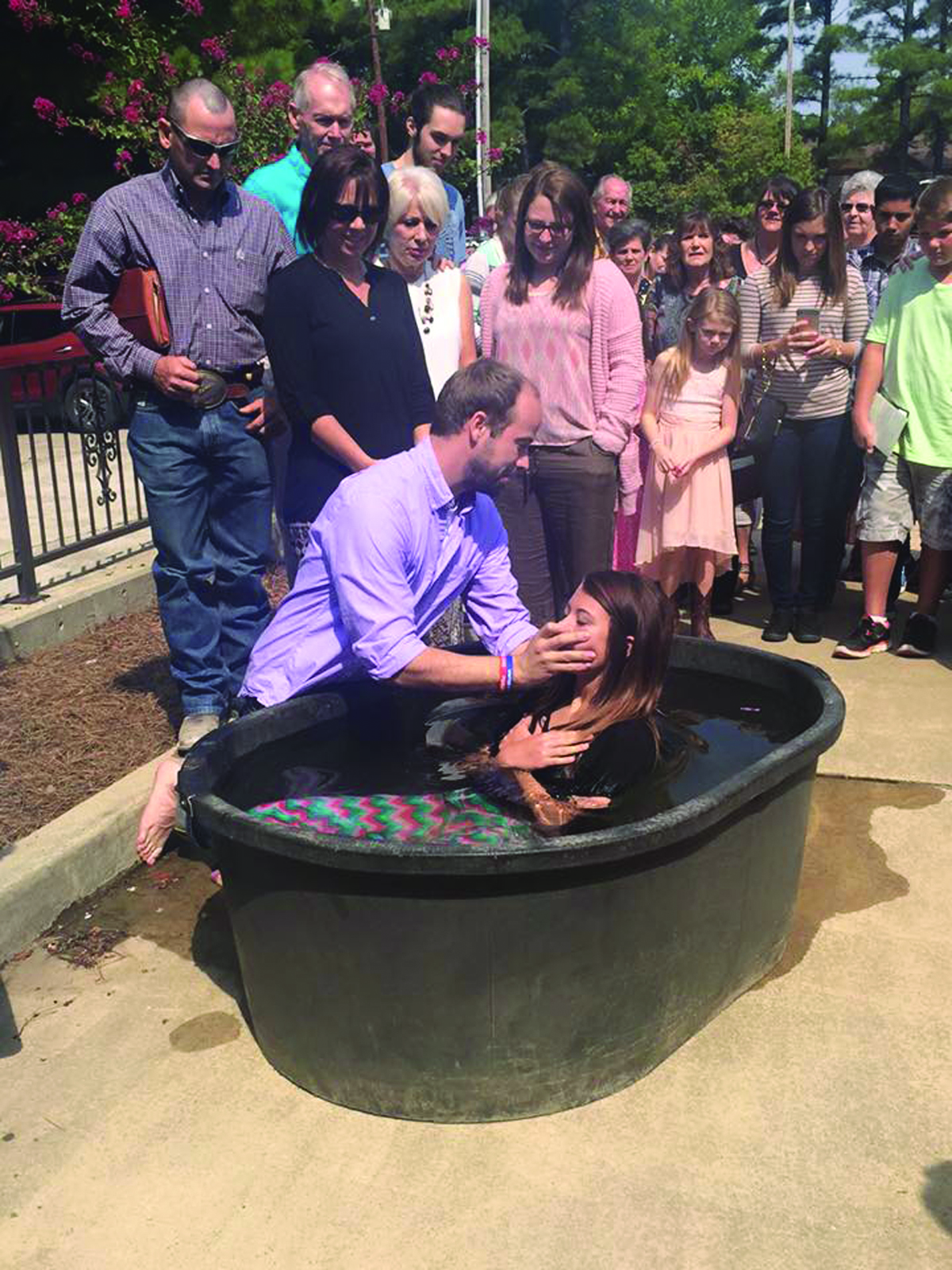 WEST MONROE – As Mount Vernon Baptist Church Youth Pastor Bobby Blasingame lowered 15-year-old Rileigh Norred into a horse trough in front of the church, he believed the significance of her baptism was a very honorable, unique, and special experience.

“Over the years and at Mount Vernon I have baptized several people, but I have never had the special privilege of baptizing anyone in a horse trough,” explained Blasingame, “Although it doesn’t matter where a baptism takes place, it’s always a humbling experience to be part of it.”

“When Rileigh told me that she wanted to be baptized in a horse trough, I thought we would have Bobby come to our house,” Michelle said, “It was great that Brother Randy was so open to the idea and accommodated her.  Our horses are a part of our everyday lives and being able to use that to reveal Rileigh’s decision to surrender her life to Christ was an extra blessing.”

“I never knew what a horse trough even looked like until we began planning Rileigh’s baptism,” Blasingame said. “Many of us at the church were aware and concerned that the water in that trough would be freezing cold for Rileigh during her baptism, but Rileigh told everyone that she did not care.  As I lowered her into the water, it was freezing cold against my hands.”

Blasingame said  the regular church service was dismissed that September Sunday and an estimated 300 members gathered outside to witness the special event.

“I have ridden horses since I was in my mother’s womb,” explained Rileigh. “I have grown up with them because my entire family has always loved horses and enjoyed riding them.”

Michelle said Rileigh always has considered herself something of a “true cowgirl.”

According to Rileigh, she was baptized in her 24-year old horse Junior’s trough which had been transported from the Norred home to the church.

Michelle said Junior was given to her daughter by a good friend of the family, JoeDee Dycus, and Rileigh added she has taken good care of her equine companion for many years now.

Rileigh’s baptism followed a FUGE student summer camp she attended in Pensacola, Fla., where she asked God for forgiveness and committed her life to Christ.  She said she felt the same spark the day she was baptized as the day she accepted Christ into her heart in July.

“Since I accepted Christ into my heart and have been baptized, my plans are to finish school, go to work, and spread His Word to others,” Rileigh told the Baptist Message.

Moreover, Blasingame praised both Rileigh’s and Kelley’s commitment to the process.

“This is a daily life we have to live.  Being a disciple is not something we just say and claim we are. After receiving Him into our hearts, I believe we should feel ecstatic,” he emphasized, referencing 2 Corinthians 5:17.

“The best part about being a new creation in Christ is freedom,” he said, “and Jesus also gives us the power to stand firm.”

By Lane Corley Olive trees produce one of the most desired and sought after fruits around the world. The trees can live for thousands of years. The olive and the olive tree is spoke of in the Bible on numerous occasions. Including a few references to family life, like in Psalms 128:3 – “Your children will be … END_OF_DOCUMENT_TOKEN_TO_BE_REPLACED