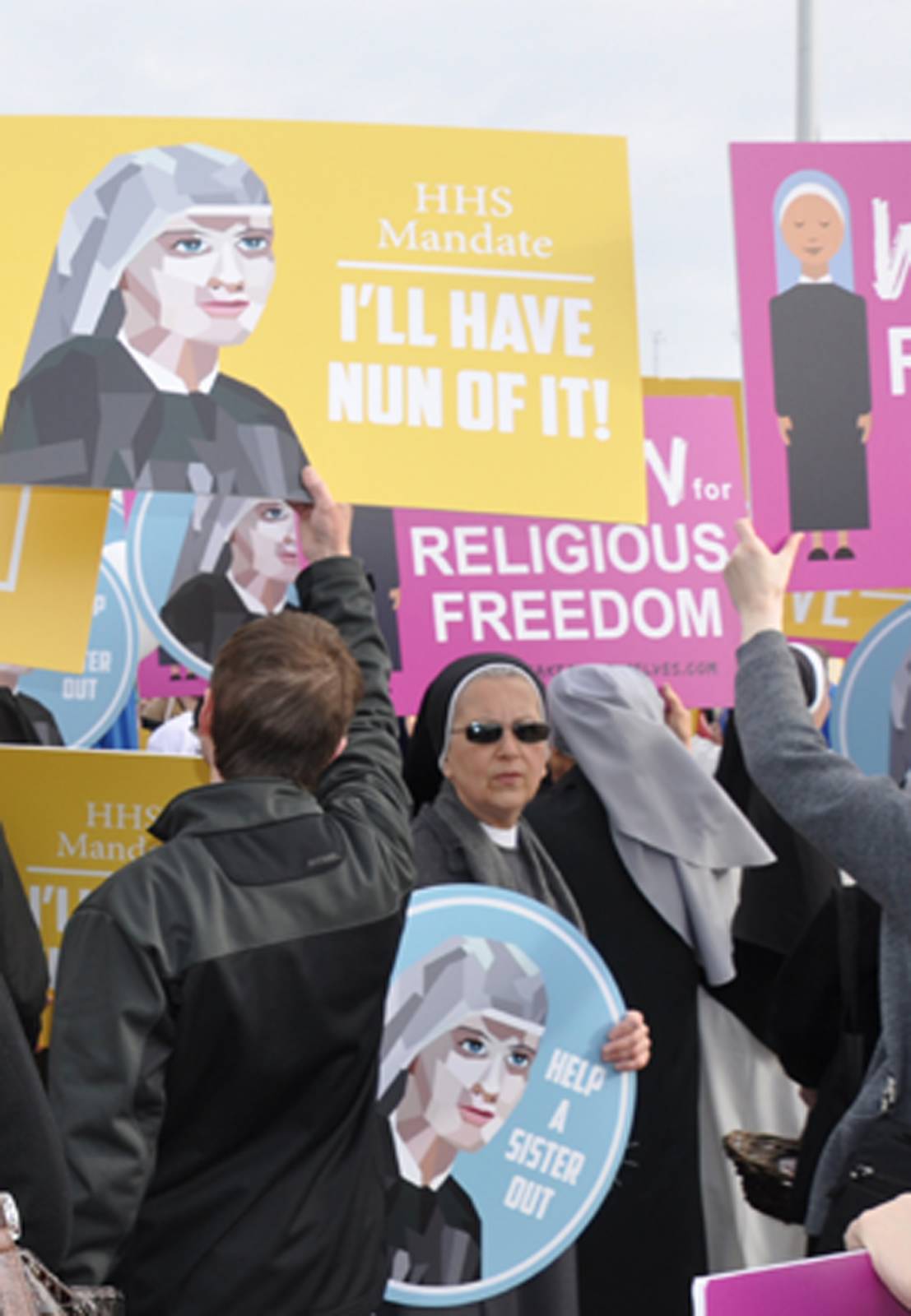 Catholic nuns were in the crowd outside the Supreme Court today when justices heard arguments in the Little Sisters of the Poor case challenging Obamacare’s abortion/contraception mandate. Photo courtesy of Rep. Diane Black’s office

WASHINGTON (BP) — The U.S. Supreme Court considered arguments Wednesday (March 23) that the federal government is intent on forcing Christian and other religious ministries to violate their consciences by accepting a rule that makes them complicit in abortion.

Lawyers for the objecting institutions — including some Southern Baptist-related entities — and the Obama administration made their cases before the justices regarding the abortion/contraception mandate, a federal regulation issued to help implement the 2010 health-care reform law. The mandate requires employers to provide for their workers not only contraceptives but drugs and devices that can potentially cause abortions. Those who refuse to abide by the requirement face fines in the millions of dollars.

GuideStone Financial Resources, the Southern Baptist Convention’s health and financial benefits entity, and two of the ministries it serves, as well as three Baptist universities, are among the challengers to a mandate accommodation provided by the federal government to religious nonprofits.

During the arguments, Paul Clement, representing those challenging the accommodation, told the justices the Little Sisters of the Poor — a Roman Catholic order of nuns — and others “face a dilemma.” They can abide by their religious beliefs and pay millions of dollars of penalties or obey the government, he said.

The seven consolidated cases accepted by the high court involve religious nonprofits that have lost at the appeals court level. The Department of Health and Human Services (HHS) provided an exemption to the mandate for churches and their auxiliaries but did not extend it to non-church-related, nonprofit organizations that object.

HHS issued an accommodation for religious nonprofits, but many of those ministries or institutions have found it unacceptable. They contend it still makes them complicit in covering contraceptives and potentially abortion-causing drugs. HHS requires them to provide written notification they meet the requirements for an accommodation, which forces the nonprofit’s insurer or a third-party administrator to provide contraceptive coverage.

The federally approved contraceptives for which coverage is required include the intrauterine device (IUD) and such drugs as Plan B, the “morning-after” pill. Both the IUD and “morning-after” pill possess post-fertilization mechanisms that potentially can cause abortions by preventing implantation of tiny embryos. The rule also covers “ella,” which — in a fashion similar to the abortion drug RU 486 — can even act after implantation to end the life of the child.

In the oral arguments, Clement, a former U.S. solicitor general, told the court the ministries have no objection “to signing an opt-out form,” but they do object to what amounts to an authorization form for coverage of abortion-causing and other contraceptives.

Donald Verrilli, the current solicitor general, argued on behalf of the federal government the accommodation constitutes a “sensible balance” between religious freedom and the government’s interest.

The Supreme Court specifically is seeking to determine in the case if the accommodation violates the 1993 Religious Freedom Restoration Act, which bars the federal government from substantially burdening free exercise of religion unless it can demonstrate it has a “compelling interest” and is using the “least restrictive means” to further that interest.

The government does not concede the accommodation is a “substantial burden” on the nonprofits’ religious liberty because the contraceptive coverage is provided by a third party, Verrilli told the justices.

Chief Justice John Roberts, however, told Verrilli it seems accurate to him to describe the accommodation as a “hijacking” of the nonprofits’ insurance plans.

Roberts and Associate Justice Samuel Alito sounded especially skeptical of the federal government’s position, while the three female justices — Ruth Bader Ginsburg, Sonia Sotomayor and Elena Kagan — led the challenges to the arguments by lawyers on behalf of the nonprofits.

As has been the case since the mid-February death of conservative Associate Justice Antonin Scalia, the high court heard oral arguments with only eight members sitting. It appears the court could split 4-4. If so, the appeals court decisions would stand, leaving only the Eighth Circuit Court of Appeals with a ruling in favor of the nonprofits’ religious freedom rights.

Lawyers for the Becket Fund for Religious Liberty and Alliance Defending Freedom told Baptist Press outside the courtroom, however, even some of the liberal justices seemed to struggle with the government’s position and might vote in support of the nonprofits.

In a column published Wednesday in The Hill, ERLC President Russell Moore said of the case, “The government isn’t really arguing that it has no other choice. The government instead is arguing that the ministries misunderstand their own faith; that they can participate in its complicated contraceptive delivery scheme without disobeying God.”

Moore wrote, “Let’s hope the Court stands up for freedom and cooperation, not for government pressure and coercion.”

GuideStone is exempt from the mandate and accompanying fines, but it serves ministries that face massive penalties for failure to obey the rule. Truett-McConnell College in Cleveland, Ga., and Oklahoma City-based Reaching Souls International joined GuideStone in challenging the accommodation. Other Baptist institutions involved in appeals before the high court are Oklahoma Baptist University, East Texas Baptist University and Houston Baptist University.

GuideStone President O.S. Hawkins said in a Tuesday news release, “The accommodation was unacceptable from its first reading. As many in Southern Baptist life rightly noted, this was nothing more than an accounting trick. The government claims this is an ‘opt-out,’ when actually, it is an ‘opt-in,’ in that the government seeks to use our plan.”

One of the arguments offered by Hawkins, Moore and others for rejecting the accommodation is the fact that more than one-third of Americans are not subject to the mandate. Several large corporations, the American military and cities such as New York are exempt from the requirement.

The court is expected to issue its opinion before its term ends, which normally is in late June. The case is Zubik v. Burwell.