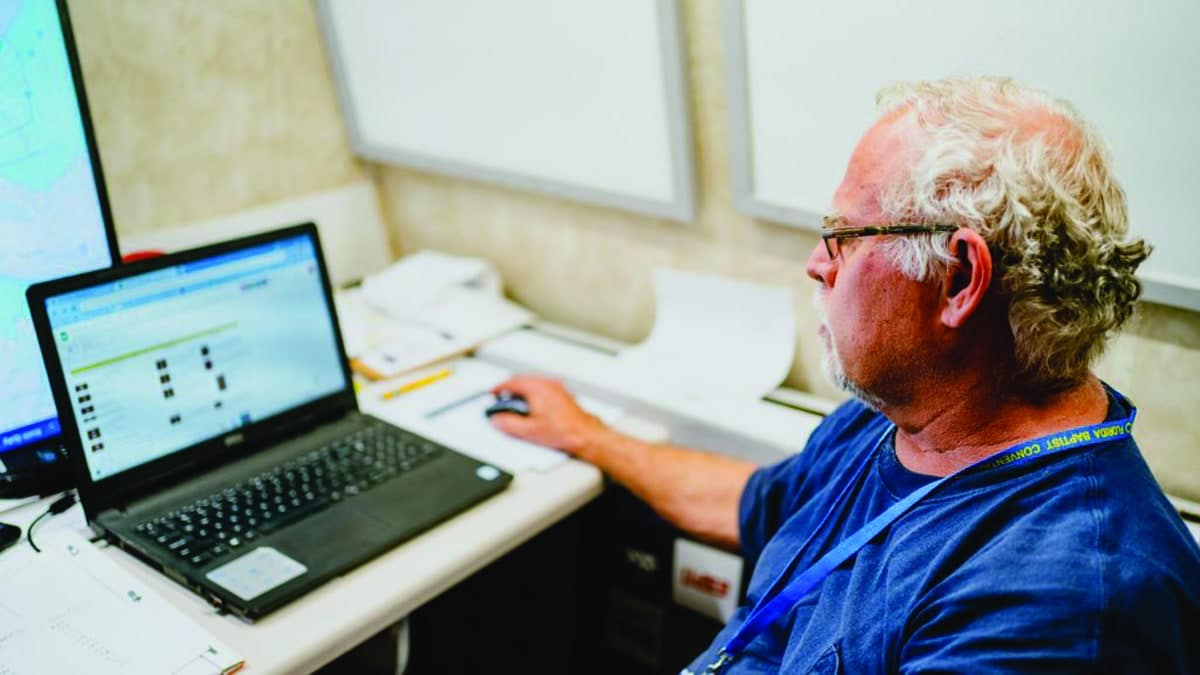 Sonny Davis scrolls through a spreadsheet of data that shows how much has been done to date and how much there is left to do. “We’ll stay as long as we have teams coming,” Davis said. Photo by Sam Evans

METAIRIE, La. — Ever since Hurricane Ida struck Louisiana on Aug. 29 as a Category 4 storm, Metairie Baptist Church outside of New Orleans has hosted an average of four teams a day, according to Sonny Davis.

Davis serves as the “white hat” for the command center that works out of Metairie Baptist, meaning he’s the person in charge of all the teams coming and going out of that location. It’s his job to know where everybody is and what they’re doing.

The “blue hats,” who serve as team leaders, keep their focus on what’s going to happen in that particular day.

“I’m concerned about what’s ahead,” said Davis, who works to keep everything flowing as efficiently as possible, which includes a computerized tracking system for teams, the priority levels of incoming jobs and data. There are currently 70 volunteers working out of this command center.

“I do a lot of work in the off season to try and make the process run as smoothly as possible,” he said.

Sonny and Terry Davis pull up their map of jobs in the area where they’re working. The different color pins denote different priority levels. The visual mapping helps the pair coordinate teams.

And while he has a lot of data to keep track of, the most exciting number he watches is how many professions of faith volunteers get to be a part of.

“In the two weeks we’ve been here, we’ve had four professions of faith,” he said.

Davis and his wife, Terry, will be serving at this location for the foreseeable future.

“We’ll stay going as long as we have teams coming. … Several other states are having a lot of other storm damage, so that [stretches resources],” he said.

The couple are members of Hillcrest Baptist Church in Pensacola, Florida.

By Lane Corley MADISONVILLE, La. - Three years ago, our family was going through one of those down seasons in the ups and downs of life. My mental focus and physical health was declining. I was discouraged and struggling mentally and emotionally. I knew I needed to change a few habits. As part of a recovery … END_OF_DOCUMENT_TOKEN_TO_BE_REPLACED