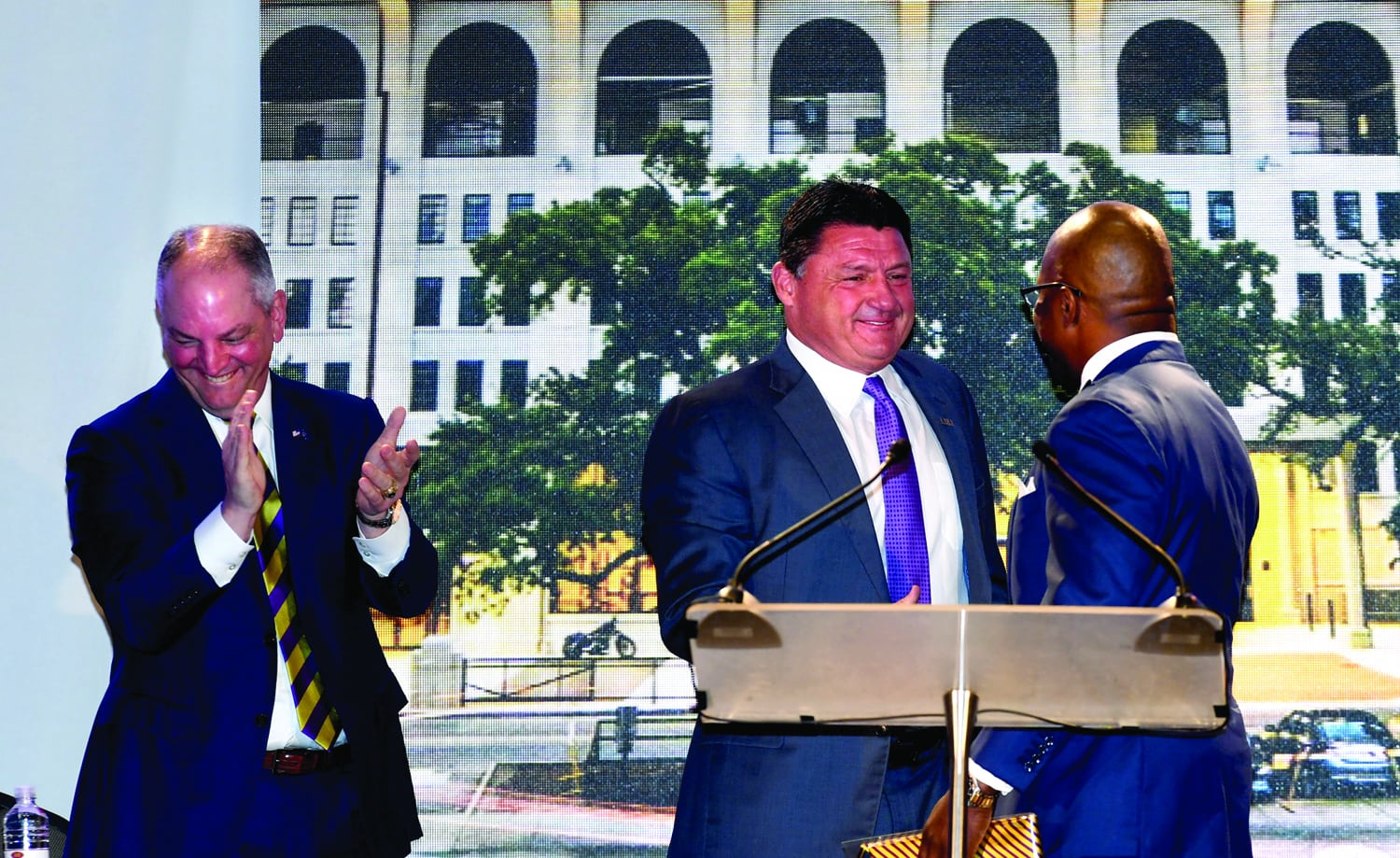 BATON ROUGE, La. (LBM)–Speaking, March 10, to the audience gathered for the 2020 Governor’s Prayer Breakfast in the Crowne Plaza Executive Center in Baton Rouge, Louisiana State University Football Coach Ed Orgeron emphasized spiritual character as a defining quality of his daily coaching approach and as a key trait of his championship football team.

“Here’s how I start my morning, every day,” Orgeron offered.

“But I get outside – I don’t know if you’ve been to our complex, but I’ve got a beautiful patio,” he said, offering the description: “you see the bridge; you see the stadium; you see the football field.”

“And here’s my prayer,” he shared. “God, thank you for letting me be the head football coach of Louisiana State University. Please give me the words and the wisdom that you want me to use to lead this team, today. In Jesus’s name we pray, amen.”

Orgeron also scored some laughter, adding that he also offers thanks “for bringing Joe Burrow, my friend!”

The head coach drew more chuckles by sharing insights about his efforts to secure Joe Burrow as his starting quarterback.

“You know, I’ve got to tell you a little recruiting story,” Orgeron laughed. “Joe came down. He was transferring from Ohio State and we needed a quarterback. He had two years left.

“His old coach that recruited him [to Ohio State] was at Cincinnati, and was recruiting him to Cincinnati,” Orgeron explained. “His girlfriend was living in Cincinnati. So the odds were against us, right?

“So he came down to Baton Rouge,” Orgeron told the raptly attentive crowd. “He didn’t talk much, He was very quiet.

“So we were going to take him to a restaurant — he wanted to eat crawfish,” he recounted. “This is how God works in my life. I promise you. So we go there — the restaurant’s out of crawfish!

[Mimicking the making of a phone call] “Hey, Boudreaux. I need 20 pounds, real fast. Bring it through the kitchen and act like they cooked it.”

“But you know what? God’s been in our lives. God had His Spirit on this ball team. You could feel it,” he insisted. “Our pastor, Ken Ellis, who was All-Pro cornerback at Green Bay, who played for Vince Lombardi, has a service every Saturday or Friday night and has given us inspirational words. One of the things he said I’m always going to remember: ‘With every opportunity there’s going to be opposition.’”

“You didn’t hear of any of our guys getting arrested,” he added. “Our guys wanted to go to school, wanted to represent LSU and the state of Louisiana in the best way they could – and they did it.

He closed, referencing the governor as “our quarterback” during these challenging times, and adding the reassurance, “we believe in you.”

By Steve Horn ALEXANDRIA, (LBM)--You might be tired of hearing that we are living in unprecedented days, and, of listening to endless reports about the crisis, quarantine, social distancing, stay-at-home orders, and flattening the curve. I know I am. So, how about some good news? Our churches are … END_OF_DOCUMENT_TOKEN_TO_BE_REPLACED