The Great Commission is Matthew 28:18-20. Based on His authority as the Risen Lord, Jesus gives a very clear command. It is not a recommendation, a request, or a suggestion. He commands us to make disciples among all nations, noting that He will always be present with us as we go about the task.

Note how Jesus explained “make disciples.” The mark of Great Commission progress is not how many hear the Gospel, nor is it simply making the Gospel known to an ever growing number of people.

According to the text, new disciples who are baptized in the name of the Father, Son, and Holy Spirit, who know and obey the commandments of Jesus, and who are themselves engaged in making disciples are the truest measure of progress. 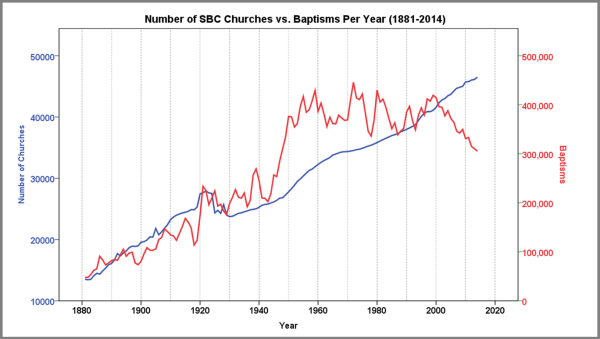 SBC Churches vs. Baptisms
The blue line, which indicates the total number of SBC churches, is generally positive with a sustained, clearly upward trend over a very long period of time. Next, note the red line which indicates total SBC baptisms. An explosive growth in baptisms, outstripping the growth in number of churches began around 1930. As you move through the years, the two lines crossed about the year 2000. An ever-widening gap between the number of churches and the number of baptisms began and continues to this day. WOW! We are about 15 years into the longest decline in baptisms in SBC history. We have more and more churches, but they are reaching fewer and fewer people.

I call your attention now to a provocative chart on the Great Commission progress of SBC Churches. The chart begins on the left in 1881 and concludes on the right with the most recent year for which date is available, 2014.

Conclusion #2: Southern Baptists are becoming a shrinking presence with a diminishing voice in our nation. 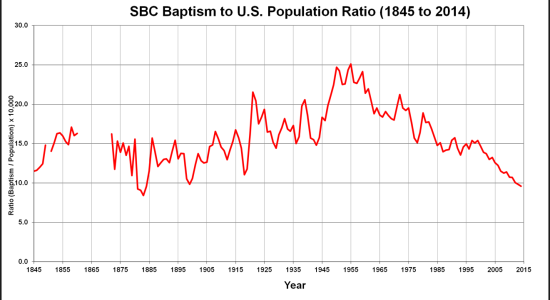 Conclusion #3: Southern Baptists are closer to losing the South than we are to reaching North America. Consider this graph of our baptisms per 10,000 people in the population. (See above).

Clearly we are losing ground relative to the population. The Millenials (age 16-36) are the largest generation in the history of the United States, but their lives are unfolding during our longest decline in baptisms.

Conclusion #4: Consider the economic implications for financial support for Great Commission activities. Because time takes all away, if we stop adding new disciples from our communities to our congregations, we stop adding new dollars to Great Commission budgets in the future. To have enough dollars to take the Gospel to the ends of the earth, SBC churches must make disciples of the lost in their communities.

Here are some brief suggestions on the way forward in our present situation. First, we must own the problem and acknowledge the need for our churches to reach their communities for Christ. Second, we must live distinctively in the culture. The foundation for every fruitful evangelism strategy is the presence of living illustrations of lives transformed by the Gospel. If we fail in discipleship, we will inevitably fail in evangelism. Third, we must provide and promote strategies, resources, and training to engage SBC churches in reaching the lost in their communities. To send out church planters and missionaries without mobilizing existing churches to reach their communities is like putting flowers in a vase without water. They cannot survive long.

To send out church planters and missionaries without mobilizing existing churches to reach their communities is like putting flowers in a vase without water.

However, all is vain if God does not move. We must seek Spiritual Awakening, a great movement of the Spirit of God in our churches and across our land. Whether we know it or not, we are at the point of desperation for God to move. Our survival is at risk.

There is a very particular wall in the ancient city of Jerusalem. The stones in that wall are all that remains of the glorious temple that once stood during the time of Jesus. It is often called the Wailing Wall, because seven days a week, 52 weeks a year, Jews and others gather at that wall to weep and remember the glory that once was as they pray for the day the glory will be restored.

By Joe McKeever Freely you have received; freely give. (Matthew 10:8) JACKSON, Miss. (BP) -- Dr. Watson was complimenting Sherlock Holmes on a brilliant observation no one else had noticed. "Of course," Holmes remarked. "It's what I do." Forgiveness and grace -- that's what we believers do. Here is … END_OF_DOCUMENT_TOKEN_TO_BE_REPLACED