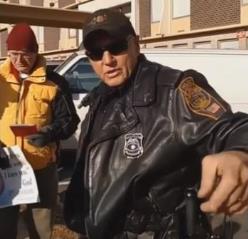 A Falls Church, Va., city policeman tells a group they can't sing Christmas Carols on the sidewalk. The city has back down after a letter from pro-life attorneys responding to its decision to prohibit pro-life advocates from signing Christmas carols at a local abortion facility.

FALLS CHURCH, Va. – A small city in Virginia has changed its tune on ban on Christmas caroling on public sidewalks.

After receiving a letter from Alliance Defending Freedom, the city of Falls Church, Va., has decided to allow Christmas carolers to sing on a public sidewalk outside of an abortion business Dec. 22.

“No one should try to shut down Christmas carols on a public sidewalk, and we’re pleased that that city has changed its tune and says it won’t do that again,” said ADF senior counsel Matt Bowman. “We will continue to monitor the situation to ensure that the carolers will be able to exercise their constitutionally protected freedom to sing tomorrow as planned.”

Alliance Defending Freedom sent a letter Dec. 21 to the Falls Church Police Department after two officers told several Christmas carolers to stop singing on a public sidewalk outside of an abortion business. One of the carolers captured the officers on video (https://www.youtube.com/watch?v=ZpWEa85iZbc&feature=youtube) informing the carolers that singing is prohibited under a noise ordinance and that they must cease singing.

The letter explains that police cannot use the ordinance to stop a constitutionally protected free speech activity, like common Christmas caroling, on a public sidewalk. The letter asks the city to rescind its ban on Christmas caroling in time for the carolers to return to the sidewalk at noon Wednesday.

“No city ordinance can trump the First Amendment. It’s preposterous to think that any noise ordinance can or should be used to stop the singing of Christmas carols on a public sidewalk,” said Bowman. “We have come to an odd place in America when an abortion business thinks it can silence Christmas carolers. The police should not be willing to do their bidding.”

In the video, two Falls Church police officers are seen speaking to the carolers while they are singing “Silent Night” at 900 S. Washington St. The officers inform the group that “the singing violates our ordinance.” One of them then displays a copy of the city’s noise ordinance, which states, “It shall be unlawful for any person to yell, shout, talk loudly, whistle or sing on any public street or private property in the city at any time, so as to cause a noise disturbance.”

Mary Flores, the caroler recording the video, then asks for clarification from the officers, “It says here…that there’s no singing allowed?” “Yes, ma’am,” the officer replies. Flores’s daughter then asks, “Isn’t this public property?” The officer responds, “Unfortunately it’s a noise ordinance violation, on public or private property.”

After receiving the officers’ threat of citation under the city ordinance, Flores and the group stopped their caroling for fear of prosecution. The ordinance imposes a penalty of “confinement in jail for not more than 12 months and a fine of not more than $2,500.00, either or both.”

The ordinance defines “noise” as “any sound which annoys or disturbs humans or which causes or tends to cause an adverse psychological or physiological effect on humans,” and “noise disturbance” as “any sound which: (1) Endangers or injures the safety or health of humans or animals; (2) Annoys or disturbs a reasonable person of normal sensitivities….”

“The Constitution prohibits the City of Falls Church from threatening pro-lifers with fines and jail time for singing Christmas carols on the public sidewalk…,” the ADF letter explains, concluding that the ordinance violates freedom of speech and is unconstitutionally vague.

“Christmas carols are obviously not a ‘noise disturbance’ to ‘a reasonable person of normal sensitivities’ as set forth in the ordinance…. Instead, the officers imposed their Christmas-caroling ban solely as a response to the hostility of abortion facility staff to the pro-life Christian viewpoint…. The fact that abortion workers are ‘annoyed’ or ‘disturbed’ by the singing of ‘Silent Night’ outside the location where they assist the destruction of infant humans is not a legitimate basis under the First Amendment to suppress the singing.”

By Waylon Bailey Recently, I saw a tweet on Twitter that asked the question, “What would Jesus do in the midst of a worldwide pandemic?” No answer to the question was given, but the author obviously had an agenda and a suggested answer. The good news is that it led me to really ask, “What would Jesus … END_OF_DOCUMENT_TOKEN_TO_BE_REPLACED