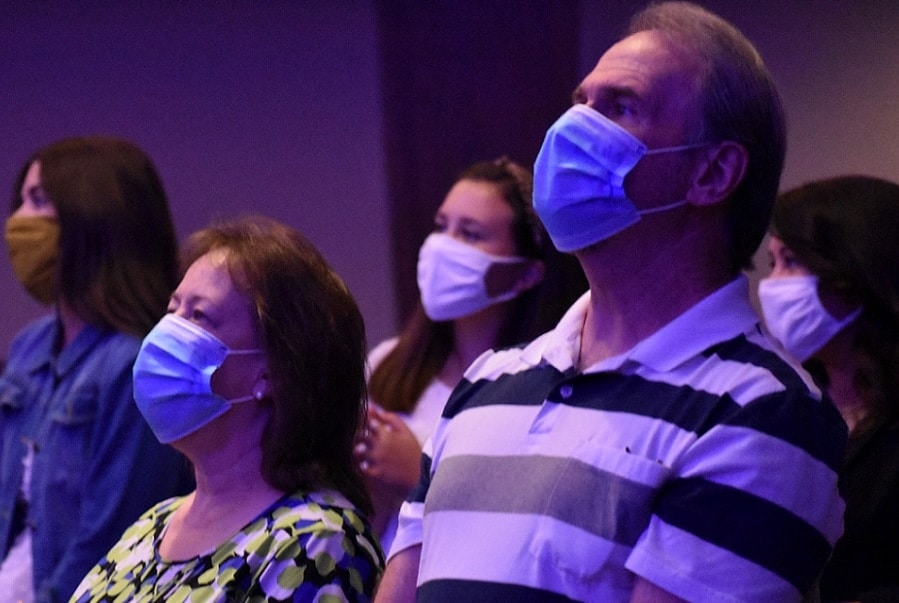 Members wore face masks during the May 16 service at Philadelphia Baptist Church in Deville. The service was the first time the congregation had gathered since March 8. Brian Blackwell photo

By Brian Blackwell, Message Staff Writer
ALEXANDRIA, La. (LBM)–Many Louisiana Baptist churches opened their worship centers for services over the weekend, nearly two months after restrictions on public gatherings forced congregations to find alternatives to meeting together within their facilities.
But reopening had limits.
On Friday, Gov. John Bel Edwards issued guidance that restricted attendance to 25 percent of seating capacity and instituted other measures said to mitigate transmission of the novel coronavirus —  as part of Phase One of restarting the economy after limiting assemblies to 10 people or fewer since March 15.
“As we begin to regather in buildings I pray that we never take for granted the public worship assembly,” Louisiana Baptists Executive Director Steve Horn told the Baptist Message. “As we regather, I pray that just as in the days after the Old Testament era of exile, there will be a return to true and pure worship. Moreover, as we see a return to the building and a more authentic worship, may it prompt a repentance that leads to revival.”
Philadelphia Baptist Church in Deville reported 385 in attendance, collectively, for its service on Saturday night and three services Sunday evening, and 113 total for two services at the church’s Horseshoe Drive campus in Alexandria. The last time they gathered on campus March 8, Philadelphia’s Deville campus drew 544 and the Horseshoe Drive campus had 170 attend.
Like many other churches, Philadelphia had hand sanitizer stations, a touch-free drop-off box for tithes, restricted areas and seating areas distanced at least six feet apart (staff also wore masks, with the exception of those who were socially distanced  from the congregation). The congregation also continued to broadcast services through its Facebook Live stream to reach those unable to attend. 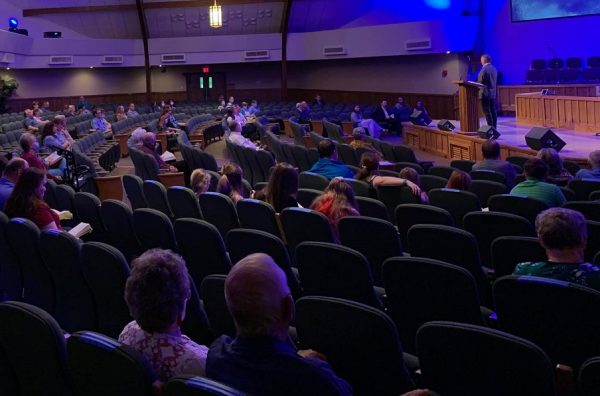 Pastor Philip Robertson encouraged members during the May 16 worship service at Philadelphia Baptist Church in Deville. The church had 385 attend worship services May 16 and 17. Brian Blackwell photo

Pastor Philip Robertson reminded his members during the Saturday service that God has been moving and speaking to him throughout the COVID-19 pandemic.
“He hasn’t left us,” Robertson said. “He hasn’t forsaken us. He is here.”
First Baptist Church in Dubach closed every other pew for its service. Pastor Cory Bruce said 42 people attended and another 35 tuned in online. The church averaged 120 people in mid-March.
Bruce said he was pleased to see nearly a third of his members return Sunday.
“I was really surprised by our in-person attendance,” Bruce told the Baptist Message. “I was expecting maybe half that many. We didn’t have any decisions made but I could definitely feel the Holy Spirit present during worship. Seeing people you haven’t seen in three months was so encouraging. Everyone was so excited to be back together.”
Grace Community Baptist Church in Iota had 20 attend the first service for elderly and at-risk people and 53 at a second service for the general membership, which included an overflow crowd in another area on campus once they reached near a maximum capacity of 50 in the worship center. Another 20 tuned in to the Facebook Live broadcast. Pastor Kevin Colson said he was pleased to see a crowd that approached the mid-March average of 80 worshipers.
“I was full of joy,” Colson said. “I am so blessed. I believe doing the first service dedicated to senior adults and those with underlying issues was key to having such good attendance.”
New River Baptist Church in Saint Amant welcomed back half of its mid-March average of 120. The church also reported 129 views through its Facebook Live stream. The church had a separate service for the elderly and at-risk individuals and another for everyone else, and for both services alternated pews for everyone’s safety.
“Today was refreshing, exciting, and encouraging,” Pastor Adam Beach said. “We enjoyed lots of new today: wiping down surfaces and door handles in between services, new offering boxes in our hand-free environment, and new seating arrangements! As the saying goes, ‘blessed are the flexible for they will not be bent out of shape!'”
Plainview Baptist Church in Bogalusa used its fellowship hall to meet for worship. Pastor Scott Breland said the room was easier to sanitize than the worship center. The church drew 63, a slight increase from the 60 who normally attended services in mid-March. On Facebook Live steam the service drew 25 viewers.
Breland said masks were required in the worship center, except when he delivered his message.
“We were all so excited to be back at church,” Breland said. “Our church building has been closed for the last few weeks but our ministry model never changed. God actually allowed us to minister to our community through this pandemic.”

Hopewell Baptist Church in Centerpoint drew 45 members for its service May 17. Submitted photo

Hopewell Baptist Church in Centerpoint experienced a mighty movement of God during its morning service, according to interim Pastor Ricky Belgard. The service was attended by 45, compared to 70 who came on an average Sunday morning prior to March.
“We had an awesome move of God at Hopewell Baptist,” Belgard said. “We had people down front at the altar call, and we had people show up early to pray through the church. It was a great service with everyone excited about being able to come together and worship in person.”
Lakeside Baptist Church in Pineville checked the temperatures of the 25 people entering the worship center. The attendance was in line with its Sunday morning average in early March.
“It was so good to be back in God’s house,” Pastor Lloyd Bye said. “I gave God all the glory again today.”

By Stewart Holloway PINEVILLE, La. (LBM) - For over two months now, my oldest son, my mom, and I have spent most Friday mornings at my mom’s clearing overgrown brush. What was planted as a fruit orchard in an open pasture almost thirty years ago has grown into a wilderness of every kind of vine and tree … END_OF_DOCUMENT_TOKEN_TO_BE_REPLACED