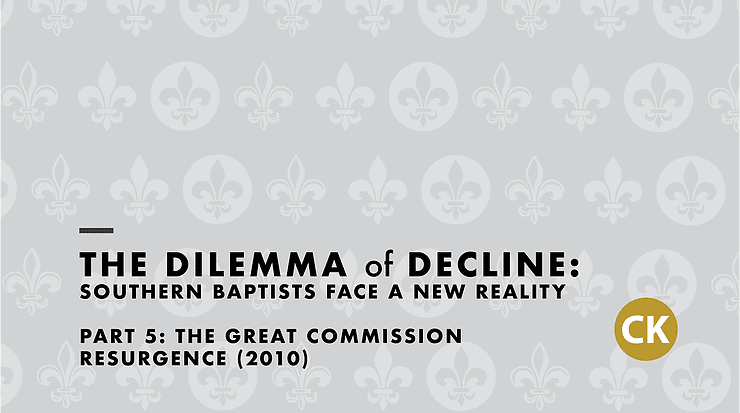 In 2009, SBC President Johnny Hunt appointed a task force, chaired by Ronnie Floyd, to consider how to generate a Great Commission Resurgence (GCR) in the Southern Baptist Convention. As noted last week, the term “Great Commission Resurgence” was first used at the SBC by NAMB President Geoffrey Hammond in his report to the 2008 Convention as he announced the launch of the National Evangelism Initiative that became God’s Plan for Sharing. There was no connection between that usage of the term and what Dr. Hunt proposed. The GCR name was intended to evoke images of the movement known as the Conservative Resurgence, which produced the most profound changes in SBC history, transforming the theological direction of the SBC and its entities. The Great Commission Resurgence, dealing with SBC decline, bears no resemblance to the Conservative Resurgence in either method or outcome.

The Great Commission Resurgence proposal received far more time and attention in Southern Baptist life, both before and during the 2010 Convention meetings, than any of the other approaches to the evangelism crisis, more than all the others combined. There is one simple reason for the dramatic difference in attention: Money. The SBC funding distribution process is not mentioned in any of the other approaches to SBC decline. Their focus was on mobilizing Southern Baptists to reach the lost for Christ. In contrast, changes to the funding distribution process were the perceived focal point in the Great Commission Resurgence proposals. This was evidenced in the pre-Convention chatter by Southern Baptists in the press and social media and in the focus of attention in the discussion on the floor of the SBC.

The highest level of concern for many Southern Baptists reacting to the report was about the impact of the proposed recognition of Great Commission Giving on support for the Cooperative Program. There was also significant conversation about state conventions reducing their budgets to send a higher portion of the CP collected to the SBC and about terminating the historic Cooperative Agreements between NAMB and the state conventions. Although asking state conventions to reduce their budgets, the GCR proposals also asked the states to take back more of the responsibility for promoting Cooperative Program giving.

In terms of ministry, NAMB was encouraged to change its priorities and make church planting its focal point, spending at least 50% percent of its budget on church planting. NAMB was also asked to take the lead in discipleship and leadership development for SBC churches, adding to NAMB’s mission rather than refining it. By contrast, virtually nothing was said in the GCR proposals to the SBC regarding NAMB’s historic role in assisting churches to present the Gospel to every person in their communities through direct evangelism. Any references to direct evangelism activities and strategies were limited to background material in the preamble and conclusion sections of the proposals without any reference to NAMB. There was no mention of the recently launched God’s Plan for Sharing initiative and no connection made between it and the GCR proposals. Attention to and funding for direct evangelism emphases were significantly curtailed in the aftermath of the GCR recommendations.

Regarding missions, the GCR Task Force asked the Convention to consider changing the ministry assignment for IMB and NAMB to allow the IMB to work with international people groups living in the U.S. They further asked for the IMB to be given an additional 1% of CP, to be taken from the allocation for the SBC Executive Committee. Neither of those proposals generated much discussion or controversy among Southern Baptists. Both were implemented. In addition, they suggested setting a goal of two hundred million dollars for the Lottie Moon Christmas Offering and one hundred million dollars for the Annie Armstrong Easter Offering by the year 2015. These goals were apparently unrealistic. A decade has passed, and neither the mission boards nor WMU have yet mentioned them as targets. The annual mission offerings remain well under those amounts. The Cooperative Agreements between the state conventions and NAMB were voided, but the results were not what many expected. Perhaps the biggest surprise has been the number of state conventions in the underserved and underreached areas of the nation now facing challenges created by significant reductions in funding from NAMB. Many of those who thought they would benefit the most from ending the Cooperative Agreements are telling a different story now. Today’s reality is not matching up with yesterday’s expectations.

The GCR Task Force felt the focus on dollars and funding distribution adjustments, along with the recommended shifts in strategic priorities, were necessary to unleash new energy for the Great Commission and stimulate Southern Baptists to break out the of the decline that was gripping the Convention. The statistics indicate that did not happen. In fact, during the decade following the adoption of the GCR proposals and the dramatic shift to church planting, the evangelism crisis deepened and the SBC decline accelerated. Ironically, drops in the number of church plants and last year’s drop in the total number of churches were added to the declining statistics of the Convention. There were no further references to the GCR proposals in future Conventions. Within three years, so little was happening that yet another approach to stopping the decline would be attempted, and that is the subject of my next blog.

Pastor’s Take Away: When starting something new, always ask what elements of the church program will be disrupted and what the cost of that disruption will be. Most importantly, ask how you will know if the new strategy or ministry is working as planned.

By Chuck Kelley Rhonda and I met on our first Sunday at Baylor University. We began dating during that freshman year, became an exclusive couple our sophomore year, publicly committed to a serious relationship in our junior year, became engaged in our senior year, and were married in June after graduation. We … END_OF_DOCUMENT_TOKEN_TO_BE_REPLACED