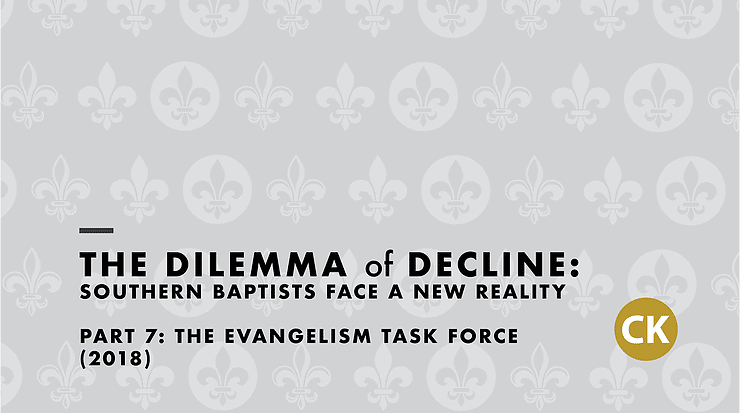 In 2017, SBC President Steve Gaines appointed an Evangelism Task Force, chaired by Paige Patterson, to investigate how Southern Baptists could be more effective in personal soul-winning and evangelistic preaching. Unlike earlier initiatives which received significant Convention attention, this Task Force made its final report to a distracted SBC President and largely uninterested messengers during the SBC meeting in Dallas in 2018. Evangelism and concerns about decline were completely overshadowed by other issues. The report was merely read into the record and formally approved by the Convention with little comment. However, while it is much too early to assess its impact, initial indications are that the recommendations of this Task Force may eventually make a measurable difference in SBC baptism numbers.

The Evangelism Task Force can be distinguished from others in several ways. Clearly and publicly, the Task Force was instructed by the Convention to focus on direct evangelism. Clearly and publicly, members were told to suggest how churches could act effectively on the evangelism mandate. More importantly, the Task Force created an expectation for the North American Mission Board to be the steady voice calling for and supporting evangelism in SBC churches. Their key assumptions were: If lost people are to come to Christ in SBC churches, Southern Baptist pastors and people must engage in evangelistic action. NAMB is assigned to encourage and support Southern Baptists in appropriate evangelistic action.

The Evangelism Task Force recommended that Southern Baptists prioritize direct evangelism at every level of Convention life, using all means and every opportunity to share Christ with those who are lost. Their suggestions included the following: All unbelievers should have an opportunity to hear the Gospel and be urged to respond in repentance and faith. Seeking to “win” or “persuade” or “implore” unbelievers to repent and believe is appropriate evangelistic activity. Roles in evangelism exist for pastors, for all believers, and for the evangelists God gifted and called to this ministry focus. The use of a “sinner’s prayer” to help an unbeliever under conviction know how to respond to the Gospel is appropriate. The use of an invitation at the conclusion of a sermon is appropriate. Baptisms should be highlighted and celebrated.

The report did not focus on the content of the Gospel or the role of God in the salvation process. Those matters were addressed briefly and clearly in language widely accepted among Southern Baptists (2018 SBC Annual, p. 93). Rather, this Task Force sought to identify what Scripture teaches believers to do so that the lost can hear the Gospel and be born again. The group asked, what does obedience to the Great Commission look like? In his 2017 Convention sermon, SBC President Steve Gaines explained that he expected this focus from the Task Force.

The next year I’m going to emphasize soul-winning. I’m going to recommend appointing an evangelism, soul-winning task force to study ways we as Southern Baptists can be more effective in personal evangelism and also in evangelistic preaching. If we will share the gospel of Jesus Christ with lost people in the power of the Holy Spirit, there will be salvation. (2017 SBC Annual, p. 110-11)

The report sought to apply the Great Commission to how Southern Baptists should live and how their churches should function in order for those without Christ to be saved. Sharing the Gospel with sinners is a more urgent task than discussing the Gospel with saints.

The Evangelism Task Force approached evangelism as a multifaceted task requiring a variety of methods reflecting the diversity of gifts, challenges, and opportunities found among Southern Baptists and their churches. Particular attention was given to the importance of training, especially for evangelism outside of church facilities. Pastors were also encouraged to include an evangelistic component in all services that incorporated the preaching of God’s Word. These were not new ideas, but they were new points of emphasis after years of inattention.

Perhaps the most important recommendation of this Task Force was the public encouragement for the North American Mission Board to embrace anew its historic assignment from the Convention (approved in 1906 SBC meeting) to assist SBC churches in evangelism, emphasizing the continual promotion of the evangelistic task. The 2010 SBC Annual (p. 208) notes there were 516 NAMB personnel, including a Vice President, assigned to Evangelization. After GCR, the evangelism staff was reduced dramatically, eliminating positions in African-American evangelism, women’s evangelism, collegiate evangelism, spiritual awakening, and many others. The national evangelism network, built in partnership with the state conventions, began to be dismantled. However, the Evangelism Task Force determined evangelism was unlikely to flourish without staff focused on the development and promotion of strategies and resources to help churches reach the lost in their communities. They recommended NAMB employ senior leadership dedicated to evangelism. The hiring of beloved SBC pastor Johnny Hunt as a Senior Vice President for Evangelism and Jim Law as his associate reflects that recommendation. NAMB is returning to addressing the importance of evangelism in local church life consistently, with podcasts and some resources for churches. In addition, a new staff position for NextGen evangelism (students) was recently created. At the 2019 SBC meeting, evangelism was still not identified as a NAMB strategic priority, as were Send Network (church planting) and Send Relief (compassion ministry), but in 2020, NAMB began to list evangelism (Send Hope) as a third strategic priority on its website. These are encouraging steps emerging from the recommendations of the Task Force. Time will tell if these and other actions to come will reverse SBC decline and help churches learn to grow again.

Once again, the gavel fell to close the 2018 Convention, ending one presidency and starting another. The SBC was on to other things. Where are we now in making progress in the battle against decline? My next blog will examine the present state of the SBC.

Pastor’s Take Away: There is always a current nudging Christians away from evangelism, which makes intentionality in calling people to Christ absolutely essential. Who drives the evangelism ministry of your church, and how visible is it on the radar of the congregation?

By Chuck Kelley Rhonda and I met on our first Sunday at Baylor University. We began dating during that freshman year, became an exclusive couple our sophomore year, publicly committed to a serious relationship in our junior year, became engaged in our senior year, and were married in June after graduation. We … END_OF_DOCUMENT_TOKEN_TO_BE_REPLACED