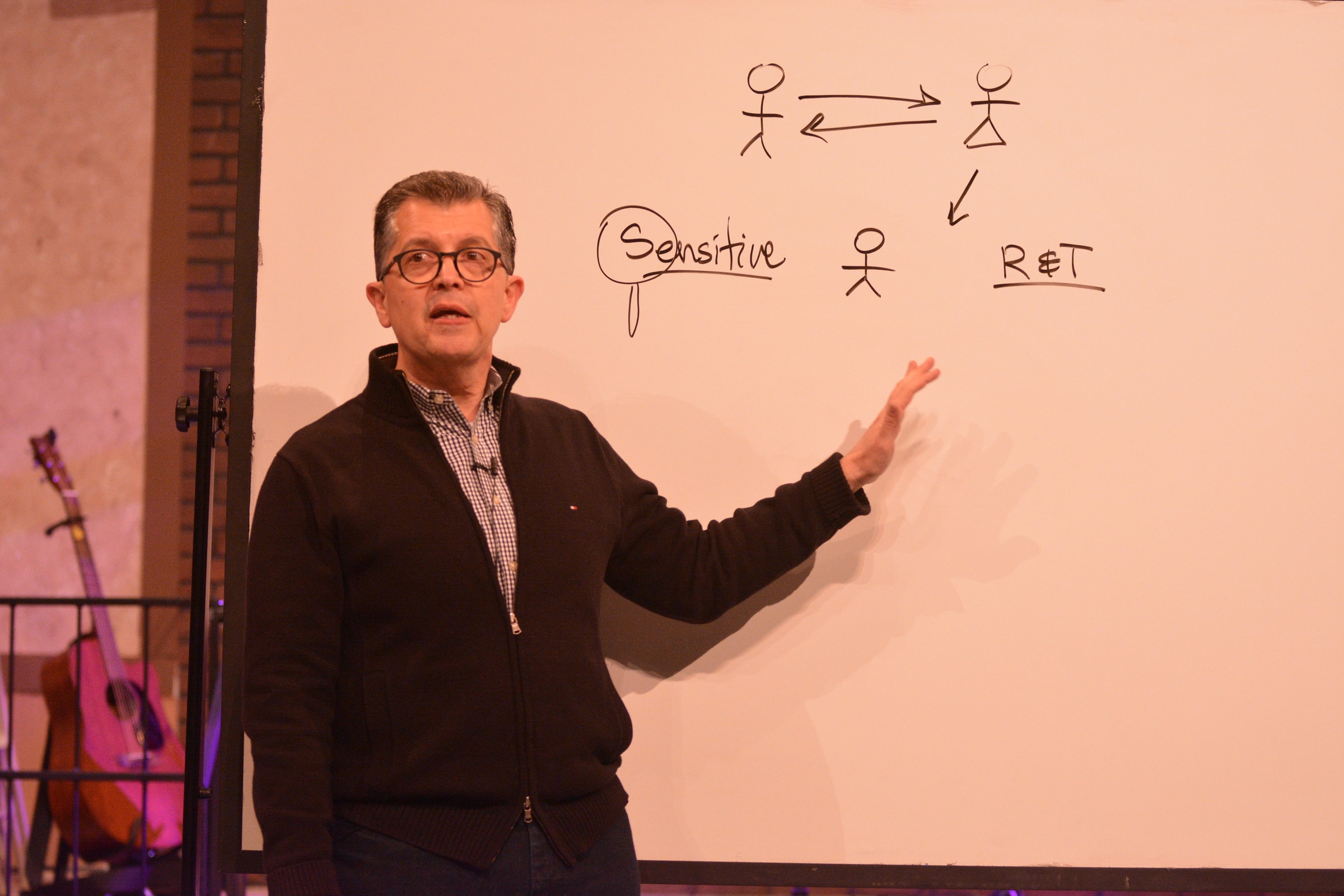 Ricky Chelette founded Living Hope Ministries more than 25 years ago to help others who like him found freedom from the homosexual lifestyle through Jesus. He is a graduate of Louisiana College.

PINEVILLE – Ricky Chelette, a Louisiana College alum who turned from a lifestyle of homosexuality to one anchored in Christ, urged students attending a recent Baptist Collegiate Ministry meeting not to believe the cultural lie that people are born homosexual.

“Some of you are struggling with this very issue,” Chelette said during the gathering, November 15. “The thing we have to do as people of the Gospel is to be able to say there is hope, there is hope to walk out of this.”

Chelette founded Living Hope Ministries more than 25 years ago to help others who like him found freedom from the homosexual lifestyle through Jesus. He has discovered males are born with either a sensitive or rough and tumble personality, with the majority of boys experiencing traits of the latter.

He said both personality types need affirmation that they have what it takes to be a man, attention from their fathers and affection to succeed. However, most dads do not know how to properly connect with their sensitive sons at early age. This causes a disconnect with the father and a stronger connection with the mother.

Even so, the sensitive male craves affirmation, attention and affection from other males, who become an objection of affection to the point that he develops homosexual preferences.

Chelette said homosexuality is not about sexuality, but rather a male with an empty heart finding another male with the same issues.

“These two guys hook up, and they drain the life out of each other only to discover this emptiness keeps on getting bigger and bigger. And it doesn’t get filled,” he said. “Eventually what happens is this person begins to identify himself with this sexual orientation. That’s why most homosexuals get very angry when Christians say homosexuality is a sin because what they hear Christians say is ‘you are a sin.’ That’s what they now believe because their feelings now become their identity.”

Chelette ended his message by challenging the students to be agents of change on the issue of homosexuality.

“Your generation, it’s up to y’all,” he said. “If you don’t believe this truth and hold onto this truth, we’re about to lose this society. America will not be America in 25-50 years from now if you guys don’t grab hold of this truth. Everyday they’re pushing, more and more.

“God said there is a man, there is a woman,” he said. “That’s the way I made you. If we don’t embrace it, we are setting our kids and our world up for destruction.”

Chelette’s message was one of two he delivered to students, faculty and staff. Earlier in the day, Chelette shared his testimony in chapel as part of the school’s series that explores truths about human relationships, Christ, being thankful, Christian higher education, perseverance in tough times and Christmas.

“Ricky Chelette speaks as one, who with God’s help, has conquered the crucible of change,” said LC President Rick Brewer. “And he lives as one whose transformation originated through spiritual regeneration. He has found the freedom that only a relationship with Jesus Christ can impart, and we are encouraged by his transparency and boldness to proclaim that true and lasting hope comes only through the redemptive work of Christ.”

By Lane Corley MADISONVILLE, La. - In Luke 15, Jesus gives us a glimpse of the Father’s heart for the lost. 1. Those far from God liked Jesus and he liked them (verse 1). Is that true of me? When was the last time someone far from God approached me? Am I available to them? Building relationships with … END_OF_DOCUMENT_TOKEN_TO_BE_REPLACED