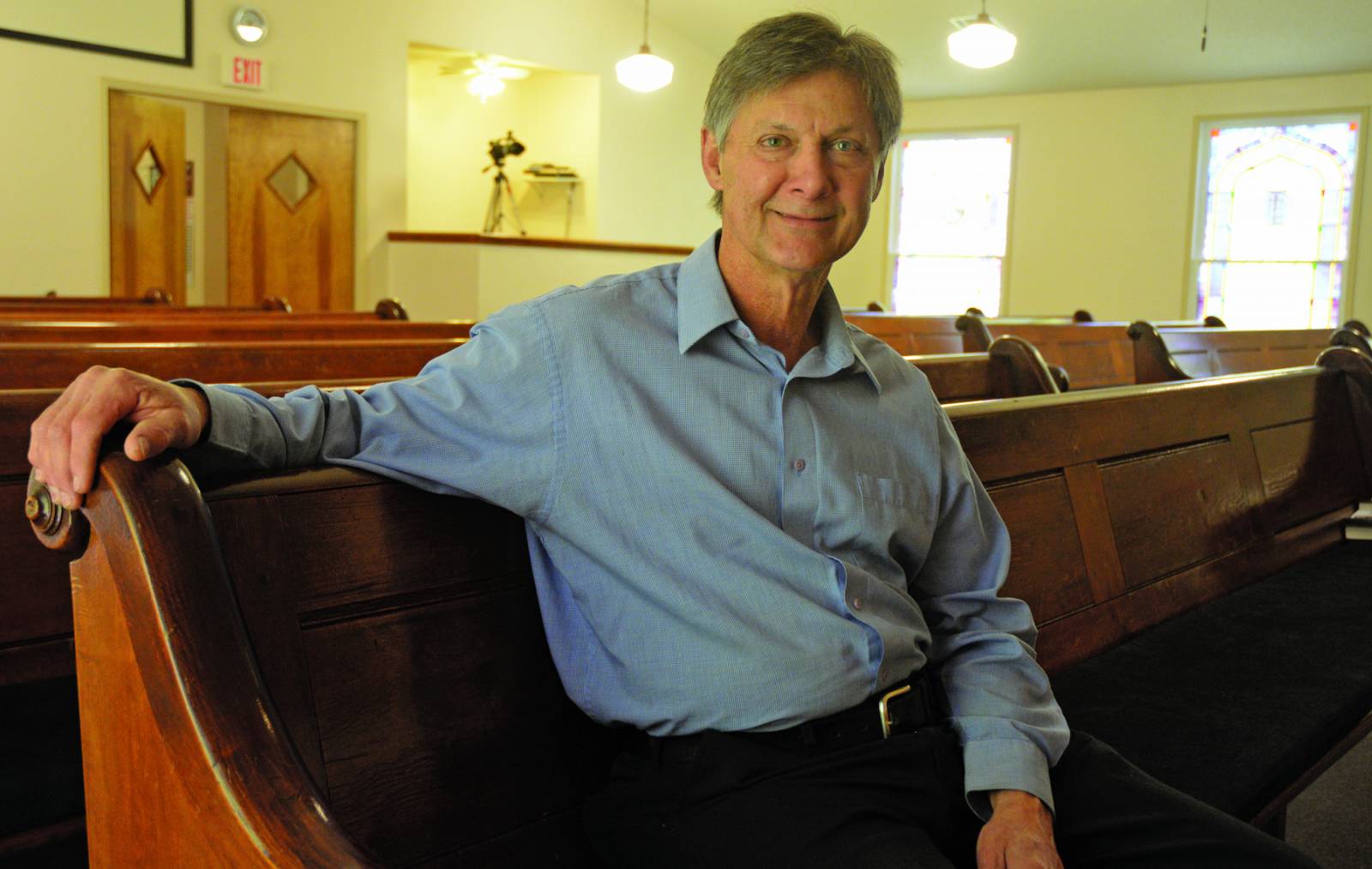 WASHINGTON – The ‘Energizer Bunny’ has nothing on church planter Louis Charrier.

On any given Sunday morning, he is preaching from the pulpit at Washington Baptist Church, a congregation he has pastored since 1994.

Later, Charrier travels 25 miles south to New Life Church in Arnaudville, where he will lead a Bible study.

In between, he even stops off to visit with a prospect who recently attended a service at the third church he pastors, Bayou Life Church in Cottonport.

While juggling three churches at once can present a challenge, Charrier said the rewards outweigh any drawbacks.

“What keeps me going is the calling,” Charrier said. “If you start to think about the plans for the week or month, it can be overwhelming. You have to take the task at hand one day at a time. God will call you and supply all you need.”

Charrier first felt the call to plant churches while attending the 1986 Louisiana Baptist Convention Annual Meeting at First Baptist Church in Lake Charles. The emphasis that year was Mission 90, which was a campaign with a goal to start 250 missions and ministries throughout the next five years.

He came back to Miller French Baptist Church in Iota, where he served as pastor, with a burden for and a passion to plant churches throughout Louisiana.

That passion turned into what would be a long history of planting 17 churches throughout the state.

His story will be told in-depth when a book “Witness Among the Cajuns” is released, with a targeted release during the 2016 Louisiana Baptist Convention annual meeting.

The first church he planted met in one of the most unlikely places – a refurbished bus in one of the church members’ backyard. Members of Hathaway Baptist Mission 10 miles north of Jennings worked for several weeks to turn the bus into a place to worship. Though it sat idle the entire time of its existence, it was in constant use.

“Most of the people coming to our church were children, so one of the members asked why they didn’t  just meet in a bus that was no longer in use,” Charrier recalls. “We saw the numbers grow and from there ‘the church inside the bus’ was born.”

For the next 30 years, Charrier continued to obey God’s calling to plant churches, no matter the location or type. He has planted Cowboy churches, Cajun congregations, African-American churches and even Hispanic ones. Many of those churches still are meeting today. 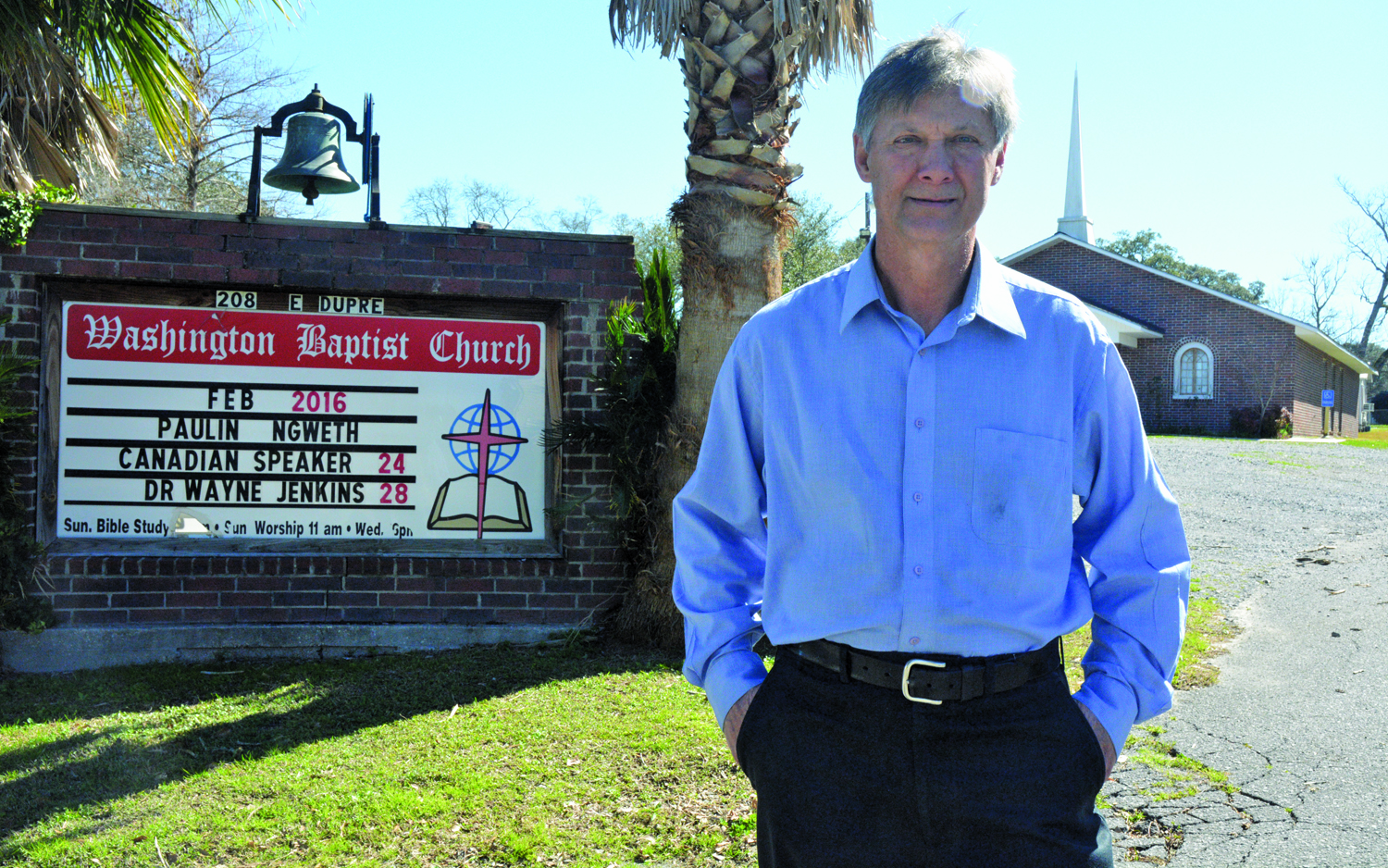 On any given Sunday morning, Louis Charrier is preaching from the pulpit at Washington Baptist Church, a church he has pastored since 1994. In more than 30 years of ministry, Charrier has planted 17 churches in the Acadiana region.

While he usually takes on 3-4 at one time and stays at each church anywhere from 2-5 years before handing off the baton to someone else, one has stayed constant throughout – Washington Baptist Church, located about 25 miles north of Lafayette.

It served as a hub for missions, instilling a mind and heart for missions in its members.

Whenever Charrier starts a new church or performs an outreach effort such as Bible study, construction projects, prayer walking or Vacation Bible School at a plant, several members will accompany him. This congregation that averages between 70 and 80 on Sunday mornings mostly recently has sponsored a church plant in Lafayette – Freedom Biker Church.

During the summer, his church joins other teams from the state to travel to several towns in New Brunswick and Nova Scotia, Canada, as they minister with a church for door-to-door surveys, Vacation Bible School and student ministry. Called Cajun Connection, this outreach aims to connect the culture of Louisiana with its northern roots.

Cajuns are descendants of the French Canadians who came to Louisiana 250 years ago.

He feels blessed that his congregation not only allows him to pastor Washington Baptist Church while splitting time with other churches, but also embraces this mindset.

“Not too many churches would let you go to plant other church plants and keep your job as pastor at their church,” Charrier said. “They are allowing me to still plant churches to fulfill the Great Commission. They see they have a part in that.

“I’m the only pastor they have had,” he continued. “From the start, that is all they have seen. So whenever I share I am leaving to start another church, they are behind me and very supportive.

“Missions are at the very heart of Washington Baptist Church,” he said. “As I was starting these churches, I was praying that I would have this one church as my home base and that my family would be able to have that one consistent church that would be passionate about missions from the beginning. The same DNA you find at Washington Baptist Church can be duplicated at other churches.”

While at Washington Baptist Church, Charrier said outreach to the African-American community has increased effectively. Charrier was named the town’s 2014 Citizen of the Year in part because of this focus, and the mayor presented a plaque during a July town meeting.

Washington has a population of 959, with a racial makeup of 53 percent black and 43 percent white citizens.

The mayor even allowed Washington Baptist Church to host the town’s workers for a presentation of Billy Graham’s “My Hope” DVD. As a result, three people accepted Christ as their personal Lord and Savior.

In 2015, he baptized nine new believers, including three African-American. Last year, the church started Street Reach, a Wednesday ministry where Charrier and others go from home to home, basketball courts and playgrounds in Washington to invite them to the church for a meal and program at the church. Between 30 and 35 African-Americans attend each week.

“It was very rewarding because after trying for so many years, it seemed like a closed door,” he said. “All the seeds that were planted before, when one of the African-Americans was saved, that opened the door to reaching more.”

Those who know Charrier best say his presence has been felt throughout the state.

Jacob Crawford, pastor of Life Point Church in Mansura, and the sponsor of Bayou Life Church in Cottonport, said Charrier is an example to all Louisiana Baptist church planters.

“God has continually used Brother Louis to reach south Louisiana with this gospel of Jesus Christ,” he said. “His passion for the Lord and zeal for church planting is an inspiration to us younger church planters.”

Though Charrier is a seasoned church planter, there was a time in his life when he was not an active member of an evangelical church.

Raised a Roman Catholic, Charrier moved to Pineville in February 1978 when he was transferred to the city while working for Pan Am Engineering in Alexandria. A month later, he and his wife, June, were attending Calvary Baptist Church in Alexandria when they realized their need for a Savior. Pam Am Engineering is now located in the same facility where Charrier accepted Christ, as Calvary has since relocated to another area of Alexandria.

When Charrier and his wife decided to accept Jesus, they were doing more than just making a decision to convert to Christianity – they were choosing to follow a faith they knew would likely leave them ostracized from their extended family.

For several years, their families refused to associate with them. Eventually, family members saw how they were living their lives and wanted the same – which led to many of them making decisions to follow Christ, too.

Charrier did what he encourages others to do as well – never give up on the notion that Christ can change someone, even if that witnessing takes several decades.

“I never gave up,” Charrier said. “I just continued. When they accepted, we rejoiced with them and were so happy to see them grow through the years. It’s a domino effect because the wife gets saved, who leads the husband, who leads others to the Lord. On and on it goes and spreads.”

By Lane Corley Olive trees produce one of the most desired and sought after fruits around the world. The trees can live for thousands of years. The olive and the olive tree is spoke of in the Bible on numerous occasions. Including a few references to family life, like in Psalms 128:3 – “Your children will be … END_OF_DOCUMENT_TOKEN_TO_BE_REPLACED