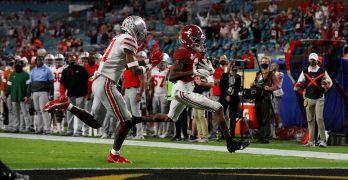 By Brian Blackwell, Baptist Message staff writer MIAMI, Fla. (LBM) – Devonta Smith’s stellar career with the Alabama Crimson Tide came to a close with a record-breaking performance in the national championship game Jan. 11, but in his postgame interview the former Amite High School star was quick to give credit to the Lord for his on-field success after a 52-24 win over Ohio State. Smith, who was named the Offensive Most Valuable Player, set championship game records for the most receptions (12) and receiving touchdowns (3) while accounting for 215 of the Crimson Tide's 464 receiving yards, all of which came in the first half, according to Alabama Sports Information statistics. He left early in the third quarter with an injury to a finger in his right hand. “I wouldn't be able to do any of this without my teammates or without God,” Smith said in the postgame interview. “I just put in the work every day no matter what the situation was, just believing in my coaches to put me in the right situations just to make plays.” The week before, during the Heisman Trophy presentation, Smith gave credit to the Lord for helping him win the award given to the nation’s top college football player. Smith, who helped Amite win the … END_OF_DOCUMENT_TOKEN_TO_BE_REPLACED 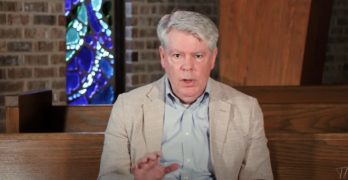 By Will Hall, Baptist Message executive editor BATON ROUGE, La. (LBM) – Randy Trahan, a tenured 24-year professor with the Paul M. Hebert Law School at Louisiana State University, has publicly denounced Critical Race Theory as a threat to society at large and warned of the risk it poses to evangelicals. Trahan, a member of Woodlawn Baptist Church in Baton Rouge, described himself as an active advocate for Black civil rights, especially as a member of the admissions committee for the LSU law school, and, a former supporter of Critical Theory (the foundation for Critical Race Theory). Trahan decried Critical Race Theory for what he said was its assault on the “sufficiency of Scripture” -- a critical doctrine that says “Scripture itself is supposed to be the sole and final authority to which nothing needs to be added nor may be added” in understanding the human condition and God’s desire for moral behavior. He also dismissed criticisms that this doctrine is “too narrow” -- that it does not allow for general revelation (learning that can be achieved though nature, specifically by observing human nature). He said that these criticisms simply are strawmen arguments to justify what adherents purport are observations about human … END_OF_DOCUMENT_TOKEN_TO_BE_REPLACED 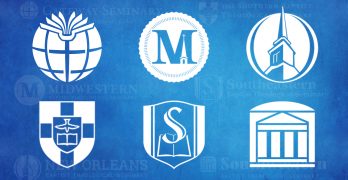 By Will Hall, Baptist Message executive editor NASHVILLE, Tenn. (LBM) – The presidents of the six seminaries of the Southern Baptist Convention signed a statement, Nov. 30, declaring Critical Race Theory and Intersectionality, theories about racism that arose largely from social activists at Harvard University and the University of California at Los Angeles, as “incompatible with the Baptist Faith & Message.” Their statement was released, they said, in recognition of the 20th anniversary of the SBC’s adoption of the Baptist Faith & Message 2000. In a statement to Baptist Press, Daniel Akin, president of Southeastern Baptist Theological Seminary in Wake Forest, North Carolina, and chairman of the SBC Council of Seminary Presidents, said the seminary leaders were prompted by widespread complaints raised by Southern Baptists. “We felt that because our brothers and sisters in various state conventions have concern about this issue, they would also want to know what their seminaries actually think, and what we are teaching and not teaching,” Akin said. Tennessee Baptists (2019) and Georgia Baptists (2020) adopted resolutions rejecting the controversial “Resolution 9” that was adopted by SBC messengers at the 2019 … END_OF_DOCUMENT_TOKEN_TO_BE_REPLACED

By Stewart Holloway PINEVILLE, La. - I’ve heard people say, “If that doesn’t light your fire, your wood is wet.” I would say that about yesterday. It’s been a while since I had a 15 1/2 hour Sunday and was so jazzed when I got home that it was hard to come down. But yesterday was that. First, we had baptisms … END_OF_DOCUMENT_TOKEN_TO_BE_REPLACED