By Will Hall, Message Executive Editor NASHVILLE, Tenn. (LBM)—Two disparate figures have circulated concerns raised about legal positions staked out by the North American Mission Board in response to a lawsuit alleging tortious interference by the entity in the ministry of Will McRaney, the former executive director of the Baptist Convention of Maryland/Delaware. Morris H. Chapman, former president and chief executive officer of the Southern Baptist Convention Executive Committee and widely recognized for defending the interests of SBC churches, and Robert Downen, a Houston Chronicle reporter who was a major figure in an exposé which negatively portrayed Southern Baptist churches regarding sexual abuse, individually have circulated on social media a report by Baptist News Global that contains allegations that NAMB’s lawyers’ claims in their legal brief is putting Southern Baptists’ cooperative ministries in danger of liability with regard to lawsuits about sexual abuse or personal injury, for instance. At issue is the historic position stated in the Southern Baptist Convention Constitution that the Convention is “independent and sovereign in its own sphere” and that “the Convention will never attempt to exercise any … END_OF_DOCUMENT_TOKEN_TO_BE_REPLACED

By Will Hall, Message Executive Editor LOUISVILLE, Ky. (LBM)—The discussion of women pastors continues to expand among Southern Baptists with some choosing to make a distinction between “being the pastor” and simply performing the pastor’s function of “preaching.” The latest dustup resulted from comments by noted theologian John MacArthur, pastor of the Grace Community Church and founder of the Master’s Seminary, both in Sun Valley, California, that he made as part of a panel during a “Truth Matters Conference” held in mid-October. Panelists were asked to give a gut reaction to phrases, and MacArthur was given a name, instead, “Beth Moore,” the top selling writer of Bible studies for LifeWay Christian Resources of the Southern Baptist Convention. MacArthur was trite, replying, “Go home,” apparently in reaction to Moore’s Twitter war during the summer against Southern Baptist leaders who spoke out against women preaching in place of the pastor after Moore had announced she was “speaking” at a church on Mother’s Day. MacArthur connected the issue with the #MeToo movement and his observation that feminists wanted power, not equality. In reply to a follow up question on the matter, MacArthur was equally to the point … END_OF_DOCUMENT_TOKEN_TO_BE_REPLACED 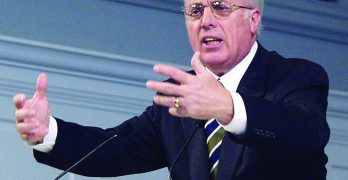 By Will Hall, Message Executive Editor SUN VALLEY, Calif. (LBM)--During a “Truth Matters Conference” held in mid-October, noted theologian John MacArthur, pastor of the Grace Community Church in Sun Valley, California, criticized the Southern Baptist Convention for passing Resolution 9 during its annual meeting in June in Birmingham, Alabama. This resolution described two controversial ideologies, Critical Race Theory and Intersectionality, in neutral terms, suggesting that in some cases both have been misused “by individuals with worldviews that are contrary to the Christian faith” to come to wrong conclusions. However, the two theoretical frameworks actually arose from radicals in academia. Critical Race Theory is traced to the Harvard Law School and the founding theorist Derrick Bell who insists that “the law,” for instance, is a power structure based on “white supremacy” and “white privilege.” Meanwhile, the idea of Intersectionality is tied to the UCLA School of Law and Kimberlé Crenshaw, the pioneer of the concept, who developed this abstract idea to help her advance the notion that “privileging of whiteness or maleness” is prevalent throughout society and the cause for the oppression of women of color. The … END_OF_DOCUMENT_TOKEN_TO_BE_REPLACED

By Joe McKeever Freely you have received; freely give. (Matthew 10:8) JACKSON, Miss. (BP) -- Dr. Watson was complimenting Sherlock Holmes on a brilliant observation no one else had noticed. "Of course," Holmes remarked. "It's what I do." Forgiveness and grace -- that's what we believers do. Here is … END_OF_DOCUMENT_TOKEN_TO_BE_REPLACED