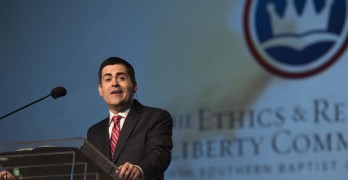 By Art Toalston & Erin Roach, Baptist Press COLUMBUS (BP) -- An international religious freedom office in the Mideast will be opened by the Southern Baptist Convention's Ethics & Religious Liberty Commission, Russell Moore announced at the SBC annual meeting June 17. Moore, the ERLC's president, told messengers, "We must contend for religious freedom for our brothers and sisters in Christ and for everyone else wherever they are on the globe." He added, "We will not stand idly by while those with whom we will share eternity are being led to the slaughter." Also during the ERLC report, Barronelle Stutzman, the Washington state florist punished for refusing to participate in a same-sex wedding, received a standing ovation by messengers at the convention in Columbus, Ohio. "Mrs. Stutzman knew that the truth is not up for sale and the Gospel doesn't bend to the highest bidder," Moore said, "and faithful Christians do not stow away their convictions in a blind trust when they enter the public square." International religious freedom The ERLC announced the appointment of Travis Wussow of Austin, Texas, as ERLC director of international justice and religious liberty in a news release, also on June 17. Through … END_OF_DOCUMENT_TOKEN_TO_BE_REPLACED 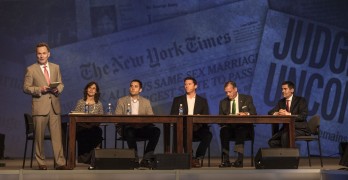 By Tom Strode, Baptist Press COLUMBUS, Ohio (BP) -- Christians should not undervalue the effect of love or the Gospel in relating to gays and lesbians, recognizing, however, that faithfulness to the biblical definition of marriage will prove costly, members of a special panel told messengers at the 2015 Southern Baptist Convention. During the Wednesday afternoon session (June 17), five panelists answered questions from SBC President Ronnie Floyd about how churches and pastors can minister in an American culture that increasingly approves of homosexuality and same-sex marriage. The discussion occurred about two weeks before an expected U.S. Supreme Court ruling that could result in gay marriage's legalization nationwide. Same-sex marriage already is legal in 37 states and the District of Columbia. In addition, the conversation came on the same day Floyd and 16 former SBC presidents released a statement saying they will not perform and the churches they pastor will not host same-sex ceremonies. Rosaria Butterfield, an author who has chronicled her journey from lesbianism to Christ, told messengers not to "deny the power of the Gospel to change lives and to travel at the grass-roots level. Your friendships … END_OF_DOCUMENT_TOKEN_TO_BE_REPLACED 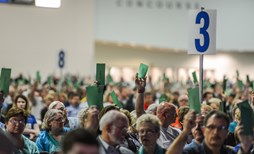 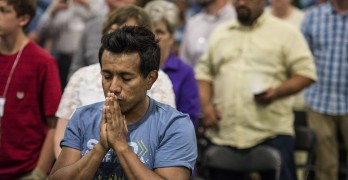 By Baptist Press COLUMBUS, Ohio (BP) -- Thousands of messengers at the 2015 Southern Baptist Convention knelt in prayer and raised their hands to heaven July 16 as they prayed for revival in the church and a great awakening across the United States. Spiritual leaders from Southern Baptist churches across America -- including Hispanic, Korean, Native American and African American pastors -- prayed for an end to racism and prejudice as they pledged to work together "as one family." The SBC's National Call to Prayer included participants around the world, connected by broadcasts from the Daystar worldwide television network and the Salem satellite radio network, as well as a live stream on the Internet. "The only thing that can ultimately reshape America is a spiritual awakening and a great movement by God," Ronnie Floyd, president of the SBC, told messengers. "There has been no great movement by God without extraordinary prayer. When was the last time you gathered thousands of people on a Tuesday evening and prayed for spiritual awakening across the United States? We have full confidence in what God can do." Floyd, alongside other pastors on stage throughout the evening, said he had participated in prayer a few days … END_OF_DOCUMENT_TOKEN_TO_BE_REPLACED 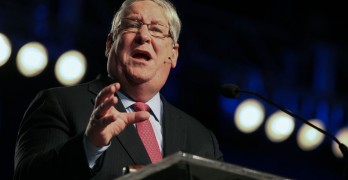 By Baptist Press Staff COLUMBUS, Ohio (BP) – New Orleans Baptist Theological Seminary President Chuck Kelley, along with other presidents of the Southern Baptist Convention's seminaries, noted key initiatives as well as enrollment gains in their reports to messengers June 16 at the SBC annual meeting in Columbus, Ohio. This year, all six seminary presidents presented their reports jointly. After the report, each president introduced the next and prayed over him. New Orleans Kelley began his report to messengers by quoting from the call of Isaiah recorded in Isaiah 6: "Whom can I send? Who will go for us? And I [Isaiah] said, 'Here am I, send me.'" "New Orleans Seminary exists to serve all of those who hear the call Isaiah heard and are answering the call to serve the Lord," Kelley said. Accessibility is one key way NOBTS is helping men and women answer God's call and train for ministry, Kelley said. Initiatives like the seminary's extensive extension center system and fully-online undergraduate and master's degrees are extending the NOBTS campus and allowing students to train for ministry without leaving the churches they already serve. Online learning is giving the seminary a truly global reach, Kelley said, … END_OF_DOCUMENT_TOKEN_TO_BE_REPLACED

By Baptist Perss COLUMBUS, Ohio (BP) -- An amendment to the mission statement of the North American Mission Board and a name change for Golden Gate Baptist Theological Seminary were among the recommendations affirmed by messengers during the Executive Committee's report to the Southern Baptist Convention June 16 in Columbus. Messengers confirmed an update to the SBC constitution regarding qualifications for churches to send messengers to the annual meeting. Messengers also approved a recommendation to approve the use of electronic voting after passing an amendment from the floor on the recommendation. North American Mission Board Messengers approved an amendment to the North American Mission Board's ministry statement to include planting churches overseas in agreed-upon instances with the International Mission Board. The amendment is similar to an amended IMB ministry statement in 2011 to allow the IMB to assist with unreached people groups in the U.S. and Canada. EC members were told during their February meeting that the amended NAMB statement will relate particularly to military chaplains stationed at bases overseas. The possibility of military chaplains facing religious liberty constraints is a key factor for … END_OF_DOCUMENT_TOKEN_TO_BE_REPLACED 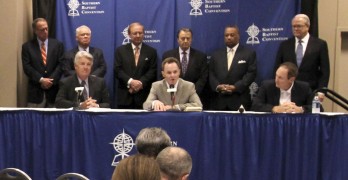 By Baptist Press COLUMBUS, Ohio (BP) -- A coalition of all living former Southern Baptist Convention presidents since 1980 issued a joint statement Wednesday (June 17) declaring they will stand on the biblical truths concerning marriage despite anticipated legal and civil changes to the definition. Pastor Jack Graham called it "the most critical issue of our times -- religious freedom and the very definition of marriage itself." Current SBC President Ronnie Floyd led the press conference and was joined on the platform by former SBC presidents Jimmy Draper, Bailey E. Smith, Paige Patterson, James Merritt, Jack Graham, Frank S. Page, Bryant Wright and Fred Luter. Reading from the statement, Graham said, "The Scriptures' teaching on marriage is not negotiable. We stake our lives upon the Word of God and the testimony of Jesus. We will not accept, nor adhere to, any legal redefinition of marriage issued by any political or judicial body including the United States Supreme Court." The statement, signed by 16 former presidents, was not issued on behalf of the SBC but issued to the SBC, evangelicals and the nation, Graham said. The statement reiterates the long-established SBC stand on homosexuality and same-sex marriage … END_OF_DOCUMENT_TOKEN_TO_BE_REPLACED 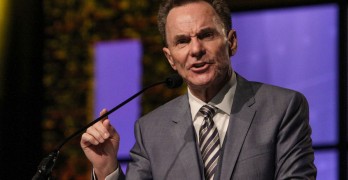 By Baptist Message COLUMBUS, Ohio (BP) -- Arkansas pastor Ronnie Floyd was reelected without opposition to a second term as president of the Southern Baptist Convention June 16 during the SBC annual meeting in Columbus, Ohio. Registered messengers totaled 5,277 messengers at the time. Floyd was nominated by North Carolina pastor J.D. Greear, who said, "God's hand has been upon Brother Ronnie. I believe he is the man God has raised up to lead us for another year." All other SBC officers for the coming year also were elected without opposition. Kansas pastor Steve Dighton, senior pastoral adviser at the Kansas City-area Lenexa Baptist Church in Lenexa, Kan., was elected as first vice president, nominated by Texas pastor and former SBC president Jack Graham. Elected as second vice president was Chad Keck, senior pastor of the Dayton-area First Baptist Church of Kettering since December 2010, nominated by David Starry of Vandalia, Ohio. John L. Yeats, executive director of the Missouri Baptist Convention since 2011, was reelected to a 19th term as recording secretary, nominated by Joshua Hedger of Kansas City, while Jim Wells, strategic partners team leader for the Missouri Baptist Convention, was reelected to a … END_OF_DOCUMENT_TOKEN_TO_BE_REPLACED 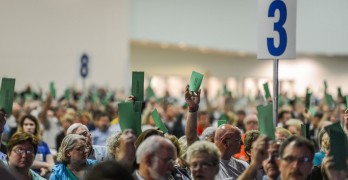 By Baptist Press EDITOR'S NOTE: The full text of the resolutions adopted during the 2015 Southern Baptist Convention annual meeting follows this story. COLUMBUS, Ohio (BP) -- Messengers to the 2015 Southern Baptist Convention adopted nine resolutions -- some on culturally divisive issues -- with almost no opposition. All the resolutions offered in the Tuesday afternoon session (June 16) at the SBC's meeting gained passage by unanimous or nearly unanimous votes. The messengers affirmed biblically based stances on such topics as same-sex marriage, racial reconciliation and the sanctity of human life, as well as religious persecution and pornography. Approved resolutions also called for spiritual awakening and celebrated the 90th anniversary of the Cooperative Program. Prior to the convention, the Resolutions Committee received only four resolutions, an unusually small number. As a result, the committee initiated more resolutions than normal, but committee chairman Steve Gaines said finding topics proved no problem. "There are so many pressing issues morally and spiritually in our nation right now, it really didn't take long to figure that out," Gaines said at a news conference after the committee's report. He … END_OF_DOCUMENT_TOKEN_TO_BE_REPLACED 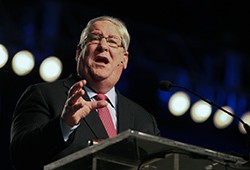 By Baptist Press COLUMBUS, Ohio (BP) –- Presidents of the Southern Baptist Convention's seminaries noted key initiatives as well as enrollment gains in their reports to messengers June 16 at the SBC annual meeting in Columbus, Ohio. This year, all six seminary presidents presented their reports jointly. After the report, each president introduced the next and prayed over him. Golden Gate Jeff Iorg, president of Golden Gate Baptist Theological Seminary, told messengers that the move to a new main campus in 2016 will be completed debt-free and with two new facilities to serve as anchor campuses on the West Coast. "The [Southern California] facility in Ontario, Calif., is a state-of-art 21st-century educational center with more than 150,000 square feet of usable space," Iorg said. Meanwhile, "The [northern California] facility in Fremont, Calif., will serve 250-300 commuter students in the Bay Area as we continue our historic ministry near San Francisco. We are spending about $45 million to complete these facilities debt-free." As part of its move to new California campuses, the seminary has requested a name change to Gateway Seminary of the Southern Baptist Convention, which received the first of two votes June 16 … END_OF_DOCUMENT_TOKEN_TO_BE_REPLACED

By Joe McKeever “‘…your ways are not my ways,’ saith the Lord.”  (Isaiah 55:8) Keep an eye on how the Lord works in your life. You might learn something useful for the next time He wants to use you. This little couplet seems to sum up 90 percent of what Scripture and life teach us concerning the operation … END_OF_DOCUMENT_TOKEN_TO_BE_REPLACED