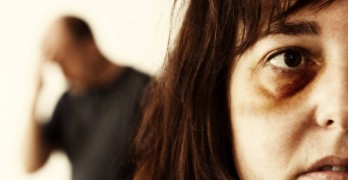 NASHVILLE, (BP) -- When Mark Bagwell started Golden Corner Church in Walhalla, S.C., 22 years ago, he was shocked by the prevalence of domestic violence among the people he sought to reach. "A huge number of the people I was counseling -- within just a short time of even the first meeting, I would start discovering that they had been abused," Bagwell, now Golden Corner's care pastor, told SBC LIFE. That reality "broke my heart and started bringing about a great passion" to confront the problem. Consistent with Golden Corner's vision of "loving God, loving people," Bagwell educated himself about ministering to domestic violence victims. Today, along with other area ministers, he works in conjunction with a local women's shelter to help abuse victims. He was quoted last year as an advocate for battered women in a Pulitzer Prize-winning series of articles on domestic violence by Charleston, S.C.'s The Post and Courier. Bagwell is among a growing coalition of Southern Baptists encouraging pastors to place more emphasis on combating domestic abuse -- a common but often overlooked problem within churches. The Centers for Disease Control and Prevention report that more than one in three women (35.6 percent) and one in four … END_OF_DOCUMENT_TOKEN_TO_BE_REPLACED 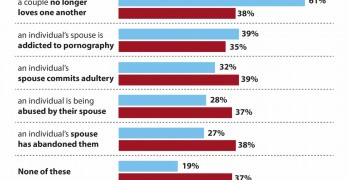 NASHVILLE (BP) -- Pastors believe not all divorces are created equal, but for many Americans any reason is as good as another, a new study shows. "Pastors make a distinction about the rightness of a divorce based on the reasons behind it," said Scott McConnell, vice president of LifeWay Research in Nashville. "They want to account for the parts of Scripture that speak of possible rationales." However, Americans view virtually all reasons for ending a marriage in the same moral light. In a phone survey of 1,000 Americans, LifeWay Research found 39 percent say divorce is a sin when an individual's spouse commits adultery; 38 percent when the couple no longer loves one another; 38 percent when a spouse abandons the other; 37 percent when a spouse is abused; and 35 percent when a spouse is addicted to pornography. Close to the same (37 percent) say divorce is not a sin in any of these. "About one in seven Americans are saying divorce is a sin in all of these cases, more than a third don't think any of these would be a sin, and almost half believe some circumstances would be sinful, but not others," McConnell said. In a separate phone survey of 1,000 Protestant pastors, less than a third want to classify as sinful an … END_OF_DOCUMENT_TOKEN_TO_BE_REPLACED 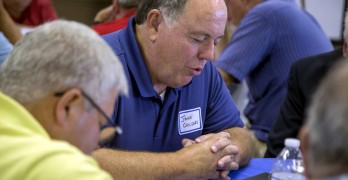 FERGUSON, Mo. (BP) -- More than 200 Baptist pastors and leaders gathered at First Baptist Church in Ferguson, Mo., on the day violence had broken out in the early morning hours during the one-year anniversary weekend of the shooting death of Michael Brown by a Ferguson police officer. Baptist leaders from the Missouri and Illinois sides of the Mississippi River met to hear plans for and the challenges of Crossover St. Louis, which will precede the Southern Baptist Convention's 2016 annual meeting, June 14-15 in St. Louis. "This has been a city in crisis for more than a year," SBC President Ronnie Floyd said during the sessions at First Baptist in Ferguson. "When we set up this meeting, we didn't realize it would be the anniversary of that horrible event. But God did. "The entire metropolitan area needs an awakening," Floyd continued. "We need to pray for an outpouring of God's Holy Spirit. God is getting His people ready and this is our moment to make a difference." On Sunday (Aug. 9) after an estimated 1,000 protesters had marched peacefully in Ferguson, police returned gunfire from a suspect around 11:15 p.m., critically wounding the man. Dozens of protesters were arrested throughout the day on Monday, the St. Louis … END_OF_DOCUMENT_TOKEN_TO_BE_REPLACED 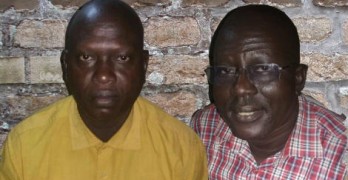 JUBA, South Sudan (BP) -- Two South Sudanese Christian pastors released from prison Aug. 5 after eight months' detention have been banned from leaving the country, Morning Star News reported. The two face no additional charges. Yat Michael, 49, and Peter Yein Reith, 36, were preparing to board a plane Aug. 6 with their families when Khartoum International Airport authorities stopped them, according to one of the men's attorneys. Sudan's National Intelligence and Security Services (NISS) ordered the ban when the pastors were initially detained -- Yat on Dec. 14, 2014 and Reith on Jan. 11, 2015 -- and gave the orders to the airport personnel, the attorney said. A relative asked for prayer. "They have been prohibited from leaving Khartoum," the relative said, "but we are working now with their lawyer, and your prayers are very needed." The two men had been released after being acquitted of charges that could have garnered the death penalty, being convicted of lesser charges instead and given credit for time served. The attorney clarified that Reith was convicted of "establishing or participating in a criminal organization" (not "breaching the peace" as Morning Star News previously reported), while Michael was convicted of … END_OF_DOCUMENT_TOKEN_TO_BE_REPLACED 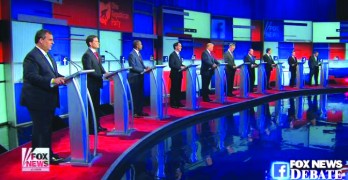 By David Roach, Baptist Press CLEVELAND (BP) -- Abortion, gay marriage and God were among the topics addressed Aug. 6 at a Republican presidential debate in Cleveland involving the top 10 candidates in polls as determined by Fox News. While no candidate expressed support for abortion rights, one -- Ohio Gov. John Kasich -- said the country should not divide over gay marriage. Former Arkansas Gov. Mike Huckabee criticized the Iran nuclear deal negotiated by the Obama administration last month for not securing the release of four American political prisoners including Pastor Saeed Abedini, though he did not mention Abedini by name. Neurosurgeon Ben Carson invoked the biblical concept of a tithe to illustrate a fair system of taxation. Among the reactions of Southern Baptist commentators was approval of at least two explicit mentions of Jesus Christ as Lord and Savior, prompting Southwestern Baptist Theological Seminary President Paige Patterson to tweet, "Heard more Gospel content in Republican debate than one often hears in some churches." When candidates were asked whether they had received a "word from God" related to their candidacy, Texas Sen. Ted Cruz, a Southern Baptist, responded, "I am blessed to receive a word … END_OF_DOCUMENT_TOKEN_TO_BE_REPLACED 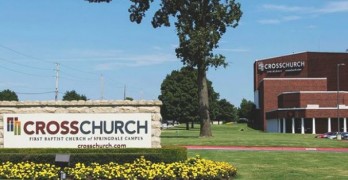 By Staff, Arkansas Baptist News SPRINGDALE, Ark. (BP) -- Cross Church in northwest Arkansas has given $1 million through the Cooperative Program in 2015 -- and plans to do the same in 2016. Ronnie Floyd, Cross Church senior pastor and president of the Southern Baptist Convention, said the church increased its previous pledge of $900,000 to $1 million and is setting its sights to do the same next year. Floyd, in an Aug. 2 email to J.D. "Sonny" Tucker, executive director of the Arkansas Baptist State Convention, said the increase in CP giving is "where I have wanted us to work toward for the past 3-4 years as a matter of stewardship of our church." "Due to us having some monies left from our Greater Things Campaign designated for global missions and relief, we were going to take $100,000 from this account and forward to the Arkansas Baptist Convention this week, along with our final two monthly payments of our budget this year ... August and September ... resulting in our church reaching this goal of $1 Million in this budget year," Floyd said in the email. The check containing the church's August and September CP gifts, plus the additional money, was sent to the Arkansas Baptist Convention on Monday (August 3), … END_OF_DOCUMENT_TOKEN_TO_BE_REPLACED 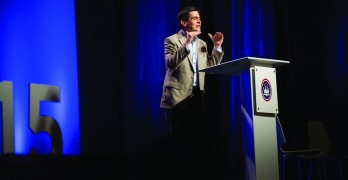 By Tom Strode, Baptist Press NASHVILLE (BP) -- Political engagement by evangelical Christians calls for a witness shaped by the Gospel of Jesus, Southern Baptists were told at a conference Aug. 5 in Nashville. Speakers at "The Gospel and Politics" -- the second national conference sponsored by the Southern Baptist Ethics & Religious Liberty Commission -- sought to help the more than 630 registrants think about how to approach politics in a changing culture a year before the next presidential election. The conference came a day after interviews of two Republican presidential candidates -- Sen. Marco Rubio and former Florida Gov. Jeb Bush -- by ERLC President Russell Moore at the Send North America Conference, an event sponsored also in Nashville by Southern Baptist missions entities. The Gospel calls for a different tone than has been demonstrated sometimes in the past by evangelicals, some speakers said. "I say this respectfully, the era of perceived, white, angry evangelicalism is officially over," said Samuel Rodriguez, president of the National Hispanic Christian Leadership Conference. Impacting culture now "requires a multi-ethnic, kingdom culture canopy that reconciles truth with love," he said during a panel … END_OF_DOCUMENT_TOKEN_TO_BE_REPLACED 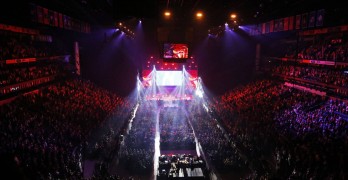 By Joe Conway, Baptist Press NASHVILLE (BP) -- As thousands of 2015 Send North America Conference attendees returned to their everyday lives, leaders of the event said the real longterm impact will be measured in the next steps participants take to live out their faith daily. "This is not about a conference," North American Mission Board President Kevin Ezell told attendees at the close of the gathering Tuesday (Aug.4). "It's about God starting a movement. This is something we are committed to for the rest of our lives." As the two-day event drew to a close, the 13,607 participants were encouraged to find their place in the everyday mission of God, and commit to next steps. Registered nurse Madison Roaton decided to tag along for a visit to Nashville when she heard her friends discussing a road trip. She had never heard of the Send Conference. But after the first day she was ready to explore her next steps in missions. "I've been involved in medical missions with my church," said Roaton of New Albany, Miss. She traveled to Ecuador earlier this year and Greece last year on mission. The idea of a life on mission resonated with her. "This has me thinking about connecting what I do with my mission." Others were … END_OF_DOCUMENT_TOKEN_TO_BE_REPLACED 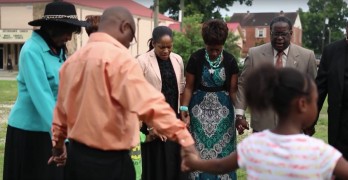 By Staff, Baptist Press HOUSTON (BP) -- Two African American churches in Houston have filed a lawsuit in response to what they say is an illegal city attempt to seize their property for an urban renewal project. "When we moved into this area, it was considered the highest crime-rate area in the city of Houston," Latter Day Deliverance Revival Church Pastor Roy Lee Kossie said according to a news release from Liberty Institute, the Christian legal organization representing Latter Day and nearby Christian Fellowship Missionary Baptist Church. "People shot first and asked questions later. But we love this community. This is where the Lord called us and this is where we want to stay. We aren't giving up without a fight." Tory Gunsolley, president and CEO of the Houston Housing Authority, told the Houston Chronicle the city wants land owned by the churches as part of a redevelopment effort to include a library and 63-unit housing project. The housing project would replace an apartment complex that had to be demolished because of damage sustained from Hurricane Ike in 2008. The demolished complex could not be rehabilitated, Gunsolley said, because of limitations associated with its proximity to Interstate 10. The city tried … END_OF_DOCUMENT_TOKEN_TO_BE_REPLACED 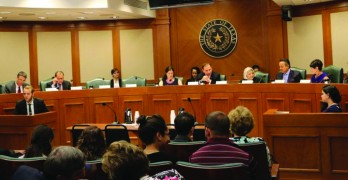 By Steve Horn ALEXANDRIA, La. (LBC) - This year has brought about more challenges and cancellations than any of us care to recount. For those meetings and events that were scheduled, more times than not, they happened virtually rather than in person. This has been true for us as Louisiana … END_OF_DOCUMENT_TOKEN_TO_BE_REPLACED