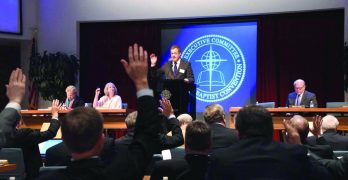 By Will Hall, Message Editor NASHVILLE, Tenn. (LBM)—Members of the Southern Baptist Convention Executive Committee took the initiative during a committee session and again during a plenary session to ask for official action about national entities that are causing churches to withhold support for national causes. In the end two panels were proposed to study SBC entities whose leaders appear to be out of step with the consensus of SBC churches. The national effort to address troubling activities by SBC entities follows by almost three months a related action taken by messengers to the annual meeting of the Louisiana Baptist Convention. Moreover, it is an acknowledgement by SBC leaders that Southern Baptists across the country are not happy with some aspects of the direction of the national Convention. WIDESPREAD UNEASE The actions were taken about a week after Prestonwood Baptist Church announced Feb. 16 it was escrowing $1 million in Cooperative Program funds for what Pastor Jack Graham described as concerns about the direction of the SBC. Graham spoke to the Baptist Message via phone then and said church leaders had expressed to him "uneasiness" about the "disconnect between some of our denominational leaders … END_OF_DOCUMENT_TOKEN_TO_BE_REPLACED

By Steve Horn ALEXANDRIA, La. (LBC) - This year has brought about more challenges and cancellations than any of us care to recount. For those meetings and events that were scheduled, more times than not, they happened virtually rather than in person. This has been true for us as Louisiana … END_OF_DOCUMENT_TOKEN_TO_BE_REPLACED