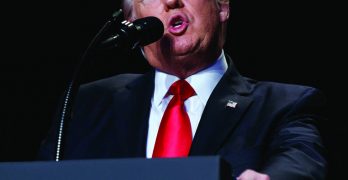 By Will Hall, Message Editor WASHINGTON, D.C. (LBM)—Louisiana Baptist national leaders are praising President Donald J. Trump as a man of his word for naming Neil Gorsuch as his U.S. Supreme Court pick. But a look at his nominees for cabinet posts shows the president has gone beyond just the minimum in keeping his promises to evangelicals -- 12 of his top 23 advisers, cabinet leaders and cabinet-level officials, are avowed Christians. SUPREME COURT NOMINEE Tony Perkins, president of the Family Research Council, a Christian public policy ministry in Washington, D.C., said in an FRC news release he was pleased to witness the president “follow through on his promise and select a nominee from the list he presented during the campaign.” That final list contained 21 names -- 10 persons were identified by Trump in May 2016 and 11 more candidates were added, including Gorsuch, 4 months later at the request of conservative groups. All 21 individuals were described as strict interpreters of the Constitution. Perkins also serves as interim pastor of Greenwell Springs Baptist Church just outside of Baton Rouge. U.S. Rep. Mike Johnson, a member of First Baptist Church in Bossier City, likewise praised the president’s … END_OF_DOCUMENT_TOKEN_TO_BE_REPLACED

By Lane Corley MADISONVILLE, La. - In Luke 15, Jesus gives us a glimpse of the Father’s heart for the lost. 1. Those far from God liked Jesus and he liked them (verse 1). Is that true of me? When was the last time someone far from God approached me? Am I available to them? Building relationships with … END_OF_DOCUMENT_TOKEN_TO_BE_REPLACED