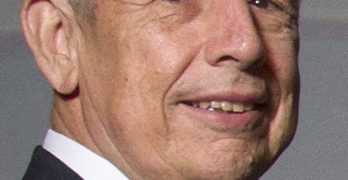 By David Roach OZARK, Mo. (BP) -- Jim Wells, a 15-term Southern Baptist Convention registration secretary known for his humble leadership style, died June 17 following a seven-year battle with cancer. He was 69. First elected registration secretary in 2002, Wells oversaw messenger registration, ballot counting and reporting of vote totals at SBC annual meetings among other duties. He served alongside eight SBC presidents. SBC President Steve Gaines called Wells "a humble servant of Jesus Christ." Wells "was a diligent servant and a godly, Christ-like man," said Gaines, pastor of Memphis-area Bellevue Baptist Church in Cordova, Tenn. "He was a great encouragement to me and to many other presidents of the Southern Baptist Convention. We will miss him." When the advanced stages of cancer prevented Wells from attending this year's SBC annual meeting June 13-14 in Phoenix, messengers adopted a resolution of appreciation that stated "countless volunteers" on the SBC Credentials Committee and among convention tellers "have witnessed transformative servant leadership through Wells' humble, yet principled leadership style." As recently as June 9, the resolution stated, Wells said he was "confident in these final hours … END_OF_DOCUMENT_TOKEN_TO_BE_REPLACED 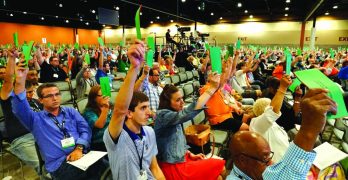 By David Roach, Baptist Press PHOENIX (BP) – Appointment of a task force to study how Southern Baptists can be more effective in evangelism and a resolution decrying “alt-right white supremacy” were among highlights of the Southern Baptist Convention annual meeting June 13-14 in Phoenix. In addition, messengers honored 15-term registration secretary Jim Wells with a resolution of appreciation after hearing a report he is in the advanced stages of cancer. Attendees of the SBC Pastors’ Conference preceding the annual meeting elected Florida pastor H.B. Charles as the conference’s first black president. The unofficial total of 5,018 registered messengers, down from 7,321 last year, expanded representation on the Executive Committee to include four states or defined territories which had not previously qualified for representation under Bylaw 30. Southern Baptists also gave the EC authority to sell the SBC Building in Nashville and received a multimillion-dollar gift through the Cooperative Program from the Florida Baptist Convention stemming from the sale of its building in Jacksonville. When registered guests, exhibitors and others were included, the count of those at the annual meeting was tallied, as of June 15, at … END_OF_DOCUMENT_TOKEN_TO_BE_REPLACED 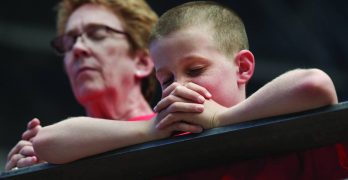 By Staff, Baptist Message PHOENIX—Because of hearing the Gospel during a crusade service held June 11 in conjunction with the Southern Baptist Convention’s 2017 Annual Meeting, 2,904 persons made salvation decisions at the live event, and another 494 declared Christ as Lord while watching the service online. A crowd of about 38,000 individuals gathered in the University of Phoenix Stadium in Glendale, Arizona, while an unknown number of persons assembled at 3,000 host sites to watch via the internet. A CROSS EVENT Although a multi-denominational endeavor, the crusade largely was a cooperative effort between Harvest America and Southern Baptists’ North American Mission Board, which scheduled the mass evangelistic appeal as the final event for Crossover, the annual outreach program conducted before the SBC annual meeting, held June 13-14 in Phoenix, Arizona. The evening service started with prayer for the nation and included worship by music performed by NEEDTOBREATHE, Trip Lee, MercyMe, Jordin Sparks, Phil Wickham and Brennley Brown. But the emphasis for the evening was a Gospel message from Greg Laurie. Laurie is pastor of Harvest Christian Fellowship, which has campuses in California and Hawaii. He also is … END_OF_DOCUMENT_TOKEN_TO_BE_REPLACED

By Ouachita Baptist University communications ARKADELPHIA, Ark.—Have you sensed a call to Christian ministry? Are you interested in learning more about diverse ministry opportunities? Ouachita Baptist University is hosting a Called 2 Ministry Retreat on Friday and Saturday, July 28-29 on Ouachita’s Arkadelphia campus. The unique two-day retreat is designed for high school students who sense God has called them into some area of vocational ministry or are interested in exploring the various areas of ministry available in today’s world. The two-day retreat is co-sponsored by Ouachita, The Prestonwood Network, Cross Church School of Ministry and the Arkansas Baptist State Convention. Keynote speakers include Jarrett Stephens, teaching pastor at Prestonwood Baptist Church in Dallas; Brian Mills, college pastor at Cross Church, Fayetteville; Jeremy Nottingham, senior pastor of First Baptist Church, Brandon, Miss., and more. Worship will be led by Blake Johnson, student ministry worship leader at Prestonwood. “Our goal for the retreat is to help prepare high school students on their journey in exploring God’s call to ministry,” said Ouachita President Ben Sells. “We look forward to our retreat leaders encouraging and … END_OF_DOCUMENT_TOKEN_TO_BE_REPLACED

By Stewart Holloway PINEVILLE, La. - I’ve heard people say, “If that doesn’t light your fire, your wood is wet.” I would say that about yesterday. It’s been a while since I had a 15 1/2 hour Sunday and was so jazzed when I got home that it was hard to come down. But yesterday was that. First, we had baptisms … END_OF_DOCUMENT_TOKEN_TO_BE_REPLACED