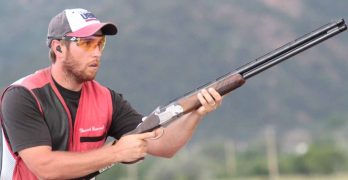 By Tim Ellsworth, Baptist Press RIO DE JANEIRO (BP) - Vincent Hancock was so fed up with skeet shooting in 2011 that he almost quit. Despite winning gold in skeet shooting in the 2008 Olympics in Beijing, Hancock had lost his love for the sport. After a horrible World Cup competition in Slovenia - his worst finish ever - he called his wife Rebekah to tell her he wanted to quit. "No, don't do that," Rebekah told him. "Just get home. Let's talk about it. Let's pray about it." To read the rest of the story, click here. … END_OF_DOCUMENT_TOKEN_TO_BE_REPLACED 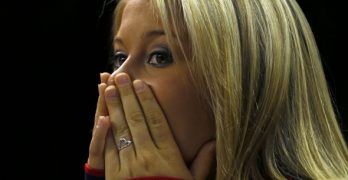 The following article is used by permission from the Christian Examiner. By Michael Foust, Christian Examiner RIO DE JANEIRO (Christian Examiner) – Simone Biles, Aly Raisman and the rest of the "Final Five" are this year's American gymnastics Olympics stars, but eight years ago in Beijing, it was Shawn Johnson. Johnson went into the 2008 Olympics as the favorite in the women's individual all-around, floor exercise and balance beam. Her teammates were quite good, too, and many considered the USA the favorite to beat the hometown Chinese for the team gold. To read the rest of the article, click here. … END_OF_DOCUMENT_TOKEN_TO_BE_REPLACED 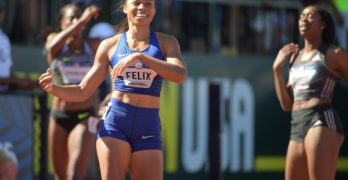 The following article is used by permission from the Christian Examiner. By Gregory Tomlin, Christian Examiner RIO DE JANEIRO, Brazil (Christian Examiner) – U.S. Track & Field athlete Allyson Felix will compete in several races next week in the Rio Olympics and, while she hopes to win the gold, she's more interested in winning the crown of life. Felix told the L.A. Times last week that her Christian faith is the reason she runs, and she said she knows the ability she has to virtually fly around the track was given to her by God. To read the rest of the article, click here. … END_OF_DOCUMENT_TOKEN_TO_BE_REPLACED 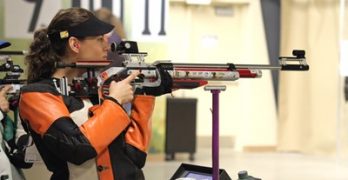 By Tim Ellsworth, Baptist Press RIO DE JANEIRO (BP) - In Sarah Scherer's competitions, the slightest movement -- even an errant breath -- can be the difference between winning and losing. It's understandable that such circumstances can cause times of nervousness and tension during a shooting competition. That's why the Olympic shooter a few months ago decided to start reciting the Lord's Prayer to herself when the pressure is on. "I realized I do that in life," Scherer told Baptist Press. "I might as well do that when I'm competing. Being able to say a prayer that's a structured prayer is very comforting." The 2016 Olympics are a return visit for Scherer, who competed in the women's 10-meter air rifle competition in London in 2012. This time, in addition to that event, she's also representing Team USA in the 50-meter rifle three position, in which competitors shoot at a target from kneeling, prone and standing positions. When she's competing, Scherer has to summon every ounce of focus and concentration she can to be successful. And she has a time limit. That's where the Lord's Prayer comes in -- something she knows by heart and can recite quickly without losing mental focus. "The words are still just as … END_OF_DOCUMENT_TOKEN_TO_BE_REPLACED 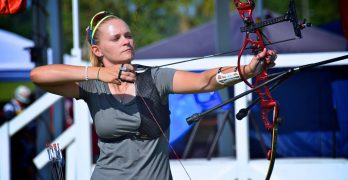 By Tim Ellsworth, Baptist Press RIO DE JANEIRO (BP) - Mackenzie Brown showed enough promise as an archer that she moved to the Olympic Training Center in Chula Vista, Calif., as a teenager. That proved to be a difficult experience that required a lot of extra maturity, and Brown relied on the Lord to help her through those times. "That was kind of a culture shock for me," Brown, now 21, told Baptist Press. "It definitely put me through a couple of rough patches where my faith wasn't as strong, but I always came back. God always found me and pulled me out every time. I thank Him every day for it." Brown, the fourth-ranked archer in the world, was upset in the round of 16 on Monday (Aug. 8) by San Ye Htwe of Myanmar, ending her hopes for a medal and bringing her first Olympic competition to a close. Despite the disappointing outcome, Brown's Olympic journey was done with the support of her family and her family's home church, Flint Baptist Church in Flint, Texas. Brown's mother Stacey is the Vacation Bible School director at the church. Her father Chuck and sister Rilie are also members there. Though Brown attends church in California where she lives, she also manages to stay connected to the Flint … END_OF_DOCUMENT_TOKEN_TO_BE_REPLACED 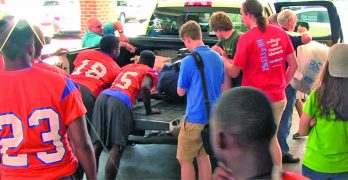 PINEVILLE – Louisiana College will welcome the Class of 2020 Saturday at 10 a.m., the official move-in day for the incoming freshman class. LC president Rick Brewer will lead faculty and staff in assisting the newcomers by unloading their gear and moving them into their respective dorm rooms. LC’s annual Wildcats Welcome Week is Aug. 14 - 19, which is a time of orientation and numerous fun activities.  Upperclassmen will also be returning to campus during that week.   … END_OF_DOCUMENT_TOKEN_TO_BE_REPLACED 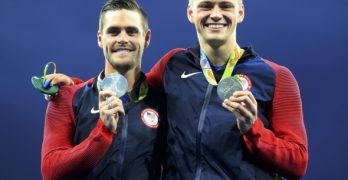 Used by permission from the Christian Examiner. By Michael Foust, Christian Examiner RIO DE JANEIRO (Christian Examiner) – David Boudia and Steele Johnson won a silver medal for the United States Monday – and then proclaimed the name of Christ to a national television audience. Boudia and Johnson won silver in men's synchronized 10-meter platform, giving Boudia his third all-time Olympic medal and Johnson his first. Boudia's faith has been well-known to the sports world – he co-wrote a book, Greater Than Gold, about his faith – although many viewers likely didn't know much about Johnson, who was in tears after the duo learned they were second. To read the rest of the story, click here. … END_OF_DOCUMENT_TOKEN_TO_BE_REPLACED 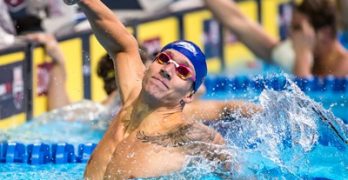 By Tim Ellsworth RIO DE JANEIRO (BP) - Take a close look at Caeleb Dressel during some of his swimming competitions, and you'll notice a Scripture reference written across his face. The reference changes with each event, and he hasn't yet worn the references at the Olympics, but a favorite one for the 19-year-old is Isaiah 40:31: "but those who trust in the Lord will renew their strength; they will soar on wings like eagles...." That verse served as the inspiration for the large eagle tattoo on Dressel's left shoulder, and the Scripture references he wears are not just for him. "It's the reason I'm in the sport, not just to go fast times, but to inspire people and show them where I find my happiness with what God's given me," Dressel said in an interview last year after U.S. Nationals. Dressel made his Olympic debut on Sunday (Aug. 7) in stunning fashion, winning a gold medal as part of the U.S. men's 4x100-meter freestyle relay team. Swimming the first leg ahead of teammate Michael Phelps, Dressel turned in a personal-best time of 48.10, just .02 seconds behind the leader to keep the U.S. team close. Phelps then pulled the U.S. team ahead for good. Dressel swims again on Tuesday (Aug. 9) in the qualifying heats … END_OF_DOCUMENT_TOKEN_TO_BE_REPLACED 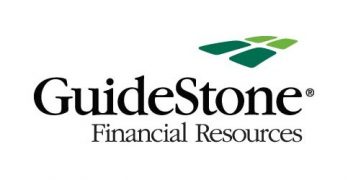 By Timothy E. Head, GuideStone Financial Resources communications NEWPORT BEACH, California — Citing gratefulness to the Lord for the privilege to serve those who serve the Lord, GuideStone executive officers and staff provided updates on key lines of business during the summer trustee meeting. The board met together in regular session July 25–26 in Newport Beach, California, in order to facilitate a trustee visit to the world headquarters of PIMCO, a long-time sub-adviser in GuideStone’s investment work and one of the largest bond investment companies in the world. GuideStone President O.S. Hawkins addressed trustees about the ministry’s theme for 2016, calling it the Year of Influence, referencing 2 Corinthians 10:13, which says, “But we will not boast beyond limits, but will boast only with regard to the area of influence God assigned to us, to reach even to you.” People and organizations of influence, Hawkins said, have vision, integrity and purpose. Citing a Customer Satisfaction Survey GuideStone recently concluded, Hawkins said the overwhelming response was that GuideStone was “trustworthy.” “It takes integrity to maintain trust,” Hawkins said. “We are thankful for the trust our participants place in … END_OF_DOCUMENT_TOKEN_TO_BE_REPLACED

By Julie Waters. WMU Communications BIRMINGHAM, Ala. – Sandra Wisdom-Martin, executive director of WMU of Texas, was unanimously elected executive director/treasurer of Woman’s Missionary Union, SBC, by the WMU executive board during a special called meeting, July 29-30, in Birmingham, Ala. Wisdom-Martin succeeds Wanda Lee, who has served as executive director of the 128-year-old missions organization for the past 16 years. Wisdom-Martin, who will begin her new role on Oct. 15, was presented to the board by a search committee appointed in February following Lee’s announcement of her intentions to retire. Prior to leading WMU of Texas since 2010, Wisdom-Martin served as women’s missions and ministries director for the Illinois Baptist State Association, 2001-2010; and as Cooperative Program Missionary with the Arkansas Baptist State Convention, 1991-2001. “Having served in three different Baptist state conventions, Sandy brings great experience as a leader to this role along with tremendous creativity,” said Joy Bolton, executive director of Kentucky and chair of the search committee. “The affirmations of her leadership received from people in each state where she has served speak volumes. She has earned love and respect … END_OF_DOCUMENT_TOKEN_TO_BE_REPLACED