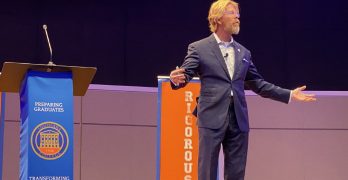 By Brian Blackwell, Baptist Message, and Elizabeth Christian, LC News PINEVILLE, La. (LBM) – Best-selling author Jay Richards challenged students and community members at the Louisiana College “God in the Workplace” annual seminar, March 22, to embrace free enterprise as the economic system that best reflects God's plan for man. “God creates the sand, but then he leaves it to us to create fiber optic cables and computer chips made effectively of sand,” said Richards, an assistant research professor with the Busch School of Business, Catholic University of America, Washington, D.C. “God could have created computer chips directly and instead he left us with the materials to do it ourselves." Richards said free enterprise maximizes opportunities to create value and wealth that did not exist beforehand. Free enterprise is not perfect, he added, but it is the economic system most compatible with the Christian worldview. “It doesn’t usher in a utopian Heaven on earth, but it’s the best of the available alternatives,” he said. Richards said some people fail to grasp this concept because they hold various “myths” about economics, such as the thought that the essence of free enterprise is based on greed and that economic … END_OF_DOCUMENT_TOKEN_TO_BE_REPLACED 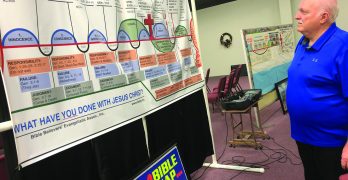 By Norm Miller, Baptist Message special assignments reporter LAKE CHARLES, La. (LBM)--University Baptist Church in Lake Charles escaped the brunt of Hurricane Laura’s wrath and has since become a haven for three other congregations who were not spared. “We saw the needs of other churches that were damaged beyond use,” said UBC Pastor John Astling. “And we wanted to help them get back to worshiping again – get back to some sense of normalcy.” At staggered times every Sunday, UBC opens its facilities to three other Lake Charles churches: Emmanuel Baptist and its Hispanic mission, as well as Calvary Baptist Church. UBC also hosts services by Johnson Funeral Home, which Laura demolished. “Zeb Johnson has done so much for our community that I just jumped at the chance to help him,” Astling explained. “His benevolence toward law enforcement and the fire department and others is well-known in the community.” Astling told the Baptist Message it is a tremendous opportunity because people are coming into UBC that congregants have not had a chance to touch with ministry before. “The funerals have given us the chance to talk to people, witness to them, and to build relationships in the community,” he said. Others are … END_OF_DOCUMENT_TOKEN_TO_BE_REPLACED 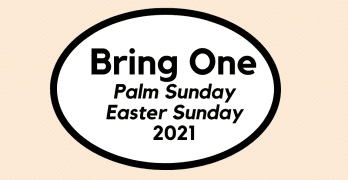 By Brian Blackwell, Baptist Message staff writer TIOGA, La. (LBM) – Clark Palmer has encouraged his members to “find one, invite one and bring one” to Palm Sunday or Easter Sunday services at Faith Baptist Church in Tioga. He said he is praying the effort will yield much spiritual fruit, including additional baptisms at a church whose post-pandemic Sunday morning worship attendance is 70. Palmer is hopeful they will soon return to their pre-virus average of 80 to 90. “We all know the number one way that people come to church is by someone inviting them,” Palmer told the Baptist Message. “Lots of people are waiting to be invited. If 30 people are invited and five come, and one develops a long-term relationship with Christ because of it, then it would have been worth the effort. We are not responsible to make results happen, but we are responsible to invite, encourage and make an appeal to people.” The effort is part of the “Increase Challenge,” a five-step action plan in effect through May 31 that Palmer, who is moderator for the CENLA Baptist Association, has issued to member pastors. He is encouraging them to find a way to focus on actions that can move people to understand the Gospel clearly and then respond in … END_OF_DOCUMENT_TOKEN_TO_BE_REPLACED 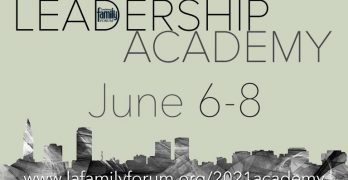 By Baptist Message staff BAKER, La. – Joseph Backholm, a senior research fellow for biblical worldview and strategic engagement at the Family Research Council, will be the keynote speaker at the upcoming Louisiana Family Forum Leadership Academy. Scheduled June 6-8 at Timothy Retreat Center in Baker, the intensive training program will equip young adults, ages 16-22, with leadership skills, life-purpose strategies, advanced communication techniques, public speaking skills, counter-culture methods, and a biblically based perspective on government. By the end of the weekend, attendees will be able to answer, “What is my life’s purpose?” An early registration cost of $250 is available through May 1. Afterward, the cost will increase to $300. Scholarships are available for those with financial hardships. For more information on attending, or to donate funding for scholarships, visit lafamilyforum.org/2021academy/. … END_OF_DOCUMENT_TOKEN_TO_BE_REPLACED 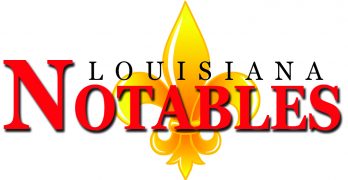 EDITOR’S NOTE: Do you have a Revival, Homecoming, a new pastor, a community outreach or a concert? The Baptist Message would love to share your church news with the rest of the state. It is very easy to do, just send in your information (who, what, where and when) to philip@baptistmessage.com or call 318.449.4345. To get your event in the paper, please submit your information three weeks prior to the event. ON THE MOVE Katy Baumgardner is the new youth ministry associate at Summer Grove Baptist Church, Shreveport. Tim Patrick will conclude duties as Director of Missions for Beauregard Parish in April. Byron Comish is the interim pastor at First Baptist Church, Springfield. Nick (wife Kara) Watts is the new student minister at First Baptist Church, Lafayette Trey Miller is the interim director at Bethany Camp & Conference Center. Chris Young is the new associate pastor at Calvary Baptist Church, Shreveport. Danny (wife JoDee) Taylor is the new pastor at Ida Baptist Church, Ida. Chris Young resigned as pastor at South Bossier Baptist Church, Bossier City. Daniel Martin has been called to Midway Baptist Church, Livingston as pastor. Carl Sullivan is the new interim pastor at Satsuma Baptist … END_OF_DOCUMENT_TOKEN_TO_BE_REPLACED 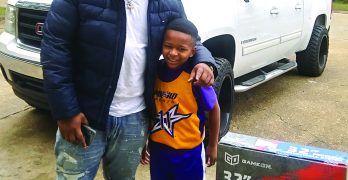 By Brian Blackwell, Baptist Message staff writer PINEVILLE, La. (LBM) –For several months Jeremiah Williams had used a makeshift goal to train for Upward basketball games at First Baptist Church in Pineville, but a passerby who drove by the young man’s home in mid-February decided he needed a real hoop to call his own. Devin Hinkston first met Williams, 9, on Feb. 13 as he was driving around Alexandria and noticed the youngster was shooting the ball into a trash can. After a brief conversation with Williams, Hinkston purchased a basketball goal at a nearby store and surprised him with the gift. “Ma’am, I saw your little boy shooting the ball in the trash can earlier and so I bought him a basketball goal,” Hinkston, a member of New Scott Olly Baptist Church in Alexandria, told the boy’s grandmother, Patricia Williams. The gesture prompted Williams to share the news on her Facebook page, which since Feb. 13 has generated 13,000 likes and 20,000 shares and prompted stories by numerous local and national media outlets. The Kelly Clarkson Show is scheduled to air the story, March 30, and Hinkston and Jeremiah Williams are scheduled to fly to New York City to appear on Good Morning America later this summer. “I got … END_OF_DOCUMENT_TOKEN_TO_BE_REPLACED 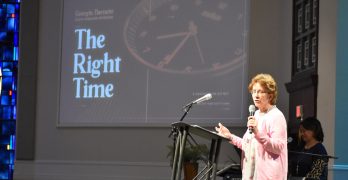 By Baptist Message staff PINEVILLE, La. (LBM) - Christ’s hope, peace and power can carry believers through difficult circumstances, keynote speaker Andrea Lennon said during the 2021 Embrace women’s conference, March 20. “God loves you and God has a plan for your life,” Lennon told just under 100 women at First Baptist Church, Pineville, and others tuning in online. “We can walk in faith and hope and confidence, even in the unknown situations and circumstances of life.” Lennon, a Little Rock, Arkansas-based, writer and speaker, said in her message, focused on Romans 15:13, that Christ’s followers can remain hopeful because Jesus overcame the grave; the Holy Spirit lives inside them; God’s Word tells them how to live; they are members of God’s family; and He has a plan for each person. “We serve the God of hope,” Lennon said. “It positions us to see all of the ways He is present, active and providing.” Lennon stressed that when trouble comes, believers can remain confident because God will walk beside them. “Joy and peace are not the absence of problems, but rather the assurance that God is with us,” she said. “Embrace” was an event for women of all cultures and generations to realize their God-given value and … END_OF_DOCUMENT_TOKEN_TO_BE_REPLACED 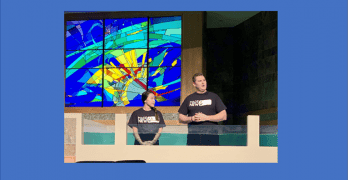 By Kylei Cornelison, Wildcats Media EDITOR'S NOTE: This is part 1 in a series about Louisiana College’s Smith Scholars. PINEVILLE, La. (LCNews) - At Louisiana College, an annual competition is held to determine the winner of the Smith Scholarship, a full ride to LC for four years—the only full ride scholarship offered by the College. One student is chosen from an interview, essay and resume-based competition. Anna Matherne, now a senior at LC, was the 2017 recipient of the Smith Scholarship. She grew up in Baton Rouge, after being adopted from an orphanage in Fuzhou, China, when she was 10 months old. She was raised as an only child by a single, widowed mother, and because of this dynamic, she has a very close relationship with her mom, Patti Matherne. “She is my best friend,” Anna says referring to her mom. Anna and her mom retell how her adoption process was a miracle and a direct reflection of God’s hand over her life. Anna says there were instances during the process that were almost supernatural, and the only explanation is God. “Before God sent me to China to adopt a little girl, He spent a lot of time making sure that I was ready,” Patti said. Patti recalls becoming “instant friends” with Anna after … END_OF_DOCUMENT_TOKEN_TO_BE_REPLACED 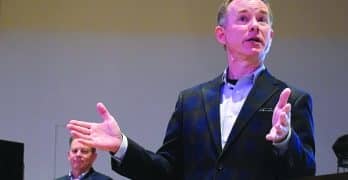 By Will Hall, Baptist Message executive editor DEVILLE, La. (LBM) — ”The president of our Convention is an important job. The way to affect significant change in the Southern Baptist Convention starts by electing the president,” said Philip Robertson, March 16. Robertson, pastor of Philadelphia Baptist Church, Deville, with a campus in Alexandria, made the statements as part of his promotion of the Conservative Baptist Network, of which he leads the Louisiana chapter, and in presenting Mike Stone, pastor of Emmanuel Baptist Church in Blackshear, Georgia, who is a candidate for president of the Southern Baptist Convention. Stone was at PBC, Deville, as speaker for a luncheon that was open to area pastors and church members. It was one of three regional events he headlined in the state, March 15-16. He is the immediate past chairman of the SBC Executive Committee and chaired a task force for them that found Russell Moore and the Ethics and Religious Liberty Commission had negatively impacted the Cooperative Program (last year, in 15 state conventions that responded to a survey, a loss of $1.5 million to the International Mission Board and a drop of $4 million to state work). The 10,000-member CBN seeks to halt a leftward … END_OF_DOCUMENT_TOKEN_TO_BE_REPLACED

By Chuck Kelley Rarely does Hollywood contact a Southern Baptist seminary, but rarely is not never. One day location scouts for a major motion picture to be filmed in New Orleans called NOBTS and asked to tour the campus. They were looking for a place that with a bit of movie magic could be made to look like the … END_OF_DOCUMENT_TOKEN_TO_BE_REPLACED