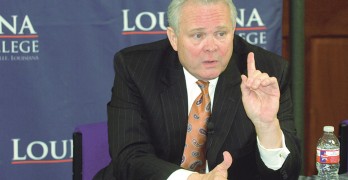 By Norm Miller, Special to the Message PINEVILLE --Louisiana College president, Dr. Rick Brewer, received notice today that the college’s probationary status has been extended to allow the college to provide more information regarding Comprehensive Standard 3.2.4, External Influence. “Our accreditation remains intact,” Brewer said, “and our academic reputation speaks for itself. We remain encouraged because of the recent upsurge of interest in and support for the college. Our stakeholders continue to entrust their students into our care as evidenced by our enrollment numbers that are on track,” Brewer added. An official of the Southern Association of Colleges and Schools Commission on Colleges (SACSCOC) notified Brewer of its governing board decision via telephone, saying that a detailed letter about the matter is forthcoming. During the coming weeks, officials from both SACSCOC and LC will confer prior to the college filing an official response later this year. “We are crafting several academic and revenue development initiatives that we anticipate launching this year. We believe these efforts underscore our commitment to preparing graduates and transforming lives in a culture that is relational, rigorous and … END_OF_DOCUMENT_TOKEN_TO_BE_REPLACED 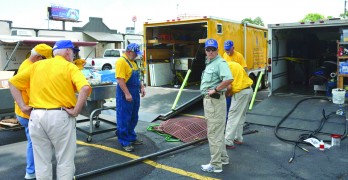 By Brian Blackwell, Message Staff Writer Louisiana Baptist Disaster Relief officials are making preparations now to respond to those directly impacted by the floodwaters of the Red River – and every Louisiana Baptist has a chance to participate. According to Louisiana Baptist state Disaster Relief Director Gibbie McMillan, four areas in north and central Louisiana likely will serve as staging areas when disaster relief teams are activated. Teams will use locations in Shreveport, Coushatta, Natchitoches and Alexandria as ministry hubs to sleep and eat at themselves. It is not certain that feeding for the public will be needed until the assessments are completed. Though trained disaster relief team members will be working, Louisiana Baptists who have not completed official training may also serve, McMillan said. Donations to the response along with prayers also are needed. Those interested in volunteering should call the disaster relief office at 318.448.3402. Donations can be made by going to louisianabaptists.org/disasterrelief or by mailing checks to Louisiana Baptist Convention, Attn: Disaster Relief, PO Box 311, Alexandria, LA 71309. In addition to teams from throughout Louisiana, others from out of state are also … END_OF_DOCUMENT_TOKEN_TO_BE_REPLACED 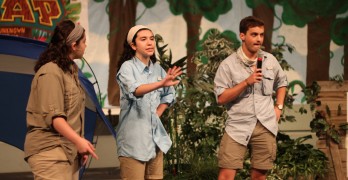 By Joe Dupree, Message Staff Writer BALL - Summer is upon us and you know what that means ... it's Vacation Bible School time. Kingsville Baptist Church in Ball is one of many Louisiana Baptist churches that are hosting or will host VBS this summer. VBS is considered to be one of the biggest outreach ministries a church has during the year. "Like any other opportunity placed into the life of a church, the importance of VBS depends on the individual church," said David Anderson, Children's Ministry Strategist, Louisiana Baptist Convention. "VBS is still the single largest evangelistic opportunity that the church will have all year long," said Anderson. "We also know that unchurched families will bring their children and engage with the church like no other time during the year." Kingsville wrapped up their VBS festivities last week  averaging 280 kids per day and 130 workers (teenagers and adults). "We have seen a renewed interest in training for VBS as we doubled our registration and attendance at the state wide training this year," said Anderson. Several churches have also requested that GOLA (summer missions program for college students) teams come to their churches to help assist them with VBS. "In … END_OF_DOCUMENT_TOKEN_TO_BE_REPLACED 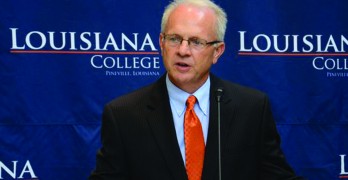 By Joe Dupree, Message Staff Writer PINEVILLE – Less than a month after Mark Rosier resigned as Louisiana College’s softball coach, Wildcat Athletics Director and head football coach Dennis Dunn didn’t waste time or have to go very far to find Rosier’s replacement. On June 8, Winnfield High School’s Lyn Bankston was introduced as the Lady Cats new head coach. He becomes only the sixth head coach in the softball program’s history and succeeds Rosier, who spent four seasons at LC. Dunn said he's known Bankston for many years and called the hiring "a good move on several levels." "I've known Lyn since he was a player at Louisiana Tech," Dunn said. "Just his grit as a competitor is something I always admired.  So, really, all of this came together like a glove, in terms of fit. He is a great fit for LC.” The opportunity to coach on the college level, especially at a college which has special meaning to him, was just too much for Bankston to pass up. "When you're in my profession and you're extremely passionate about it like I am, the thoughts always come into your mind," said Bankston. "You always want to coach at the highest level." “Louisiana College softball has such a rich history and is full of tradition,” said … END_OF_DOCUMENT_TOKEN_TO_BE_REPLACED 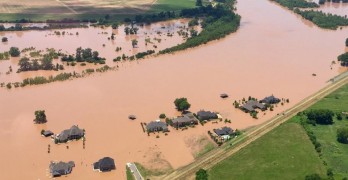 Joe Dupree, Message Staff Writer SHREVEPORT/BOSSIER CITY - With the floodwaters threatening and already making their way onto the streets in Shreveport and along the lower levels of the riverfront in Bossier City, the Louisiana National Guardsmen have been put on alert and have busy securing the area and bracing for more possible flooding. "Engineer teams have been working nonstop on the construction of an 800 linear ft. HESCO barrier, consisting of two rows on the bottom and one row on the top totaling 2,400 linear feet, to fortify a concrete wall," said Staff SGT Denis B. Ricou. The Guardsmen have been busy hauling assets, assisting with construction efforts, and positioning various teams to affected areas since June 3rd. … END_OF_DOCUMENT_TOKEN_TO_BE_REPLACED 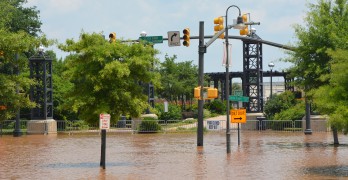 By Brian Blackwell, Message Staff Writer SHREVEPORT/BOSSIER CITY – As flood waters of the Red River rise, Louisiana Baptist Disaster Relief teams are on alert to respond if needed. According to Louisiana Baptist state Disaster Relief Director Gibbie McMillan, teams originally scheduled to deploy to Oklahoma and Texas are now being kept in Louisiana in case they are activated. McMillan said they could be in areas of the state affected by recent flooding as soon as next week. “We are paused and waiting to see how much damage will take place then the teams will come in,” McMillan said. “It could be next week before we can begin work. We need people to pray for those affected and be ready to respond when the time comes. We will need places for volunteers to stay when they respond.” As of Monday, 84 homes in the Shreveport/Bossier City area were flooded, McMillan said. Streets in the area also have seen floodwater, including a small portion of the Louisiana Boardwalk in Bossier City and near the SciPort museum in Shreveport. Numerous streets also have been closed, including some off and on ramps on and in some sections of lanes on I-220 westbound. Lane Moore, director of missions for the Northwest Louisiana Baptist … END_OF_DOCUMENT_TOKEN_TO_BE_REPLACED 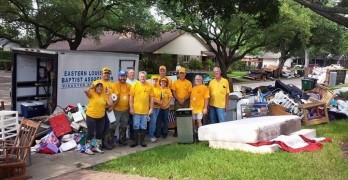 By Brian Blackwell, Message Staff Writer Louisiana Baptist Disaster Relief teams are responding to an area in Oklahoma devastated by a tornado in Oklahoma and a suburb of Houston, Texas, that saw historic rainfall in late May. Two mudout teams are in Missouri City, Texas, a town located about 18 miles southwest of Houston. East Fork Baptist Church in Kentwood and Coteau Baptist Church in Houma arrived in the area on Tuesday and will remain there until today. Nearly 1,800 homes were underwater in the community, according to Gibbie McMillan, Louisiana Baptist Disaster Relief state director. McMillan said the response there could take up to a year. Meanwhile, two chainsaw teams are ministering in Poteau, Okla., where a tornado destroyed six homes and damaged another 50 structures, according to LeFlore County’s emergency management. The teams from Sabine Baptist Association left on Thursday and will return the following week. McMillan said Louisiana Baptists wanting to help can do so in three ways – pray, give and go. “In a magnitude of this disaster and with this many people affected, you do what you have to do,” McMillan said. “We will stay until the job is finished.” Scottie Stice, director of Disaster Relief Ministries for … END_OF_DOCUMENT_TOKEN_TO_BE_REPLACED

By Joe Dupree, Message Staff Writer ALEXANDRIA -- A place to begin again. The saying of Calvary Baptist Church in Alexandria is bringing new meaning to its proud slogan. Why? The church is currently constructing a new sanctuary that, when finished, will seat 1,558 congregants on any given Sunday. Calvary Hall is also getting a 31 percent expansion as well as a new dedicated bridal suite and 250 percent expansion of restroom facilities. Additionally, there will be a new entrance to the Calvary campus along Mohon Street. This new entrance will feature a large, covered driveway and drop-off. It will also provide a more efficient and safer access for traffic flow along the street. “Throughout Calvary’s 92 years, God has led us several times to take visionary, bold and courageous steps,” said Pastor David Brooks concerning the progress of Calvary’s growth. “The motivation for these steps has always been to reach non-believers and lead all believers to become fully devoted followers of Jesus Christ.” He went on to say the new worship center positions Calvary to be able to share the good news of Jesus Christ in a relevant manner for many decades to come. The estimated finish date of this new project is slated for … END_OF_DOCUMENT_TOKEN_TO_BE_REPLACED

ALPHARETTA, Ga. (BP) -- The North American Mission Board has named former Southern Baptist Convention President Fred Luter as its new national African American ambassador. In that role, Luter will focus on involving more African American churches in the SBC and in church planting. "We still have a lot of lost souls out there who aren't in anyone's church," Luter said. "One of the primary messages I'll have for pastors is to encourage them to have compassion for the lost. If we're going to be successful in church planting, that has to happen." Luter will speak on behalf of NAMB throughout the year and represent the mission board at a variety of SBC events, sharing NAMB's goal to increase the number of African American churches in the convention from 4,000 to more than 5,000 in the next five years. Luter will continue to serve as senior pastor of Franklin Avenue Baptist Church in New Orleans. In 2012, he became the first African American to be elected president of the Southern Baptist Convention in its 167-year history. "I am overjoyed to learn of Dr. Fred Luter's appointment," said K. Marshall Williams, pastor of Nazarene Baptist Church in Philadelphia, Pa., and president of the National African American Fellowship … END_OF_DOCUMENT_TOKEN_TO_BE_REPLACED 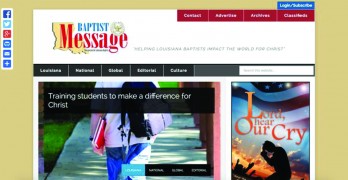 By Brian Blackwell, Message Staff Writer ALEXANDRIA – Continuing efforts to improve its footprint on the Internet, the Baptist Message launched a redesigned website June 4 offering a variety of features making baptistmessage.com easier to navigate and a better complement to Louisiana Baptists’ newspaper. “The digital redesign is a great improvement, incorporating new features that make the online Baptist Message a better partner for the print edition,” said Will Hall, who recently joined the news journal as editor. “But also, it reflects well on the professionalism and commitment of the news staff for completing such a large change effort while in the midst of a leadership transition,” said Hall. “It’s exciting to be joining this Baptist Message team.” The new features include a more user-friendly presentation of articles, a PDF version of the print edition and an improved archives section that allows searching for articles by descending order of date whether published in print or online. Video clips may be added to articles, and users may now comment on reports and easily share stories through social media links such as Twitter and Facebook. The new website also offers new advertising possibilities. Churches, … END_OF_DOCUMENT_TOKEN_TO_BE_REPLACED

By Steve Horn ALEXANDRIA, La. (LBC) - This year has brought about more challenges and cancellations than any of us care to recount. For those meetings and events that were scheduled, more times than not, they happened virtually rather than in person. This has been true for us as Louisiana … END_OF_DOCUMENT_TOKEN_TO_BE_REPLACED