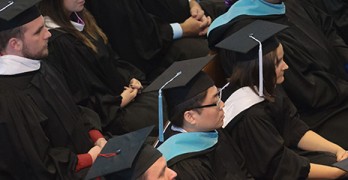 By Marilyn Stewart, NOBTS Communications NEW ORLEANS (BP) -- New Orleans Baptist Theological Seminary President Chuck Kelley pointed to Christ's birth and the meaning of Emmanuel during the seminary's Dec. 19 graduation ceremony. "'God with us' changes everything," he told graduates. Speaking to a class of 224 candidates, Kelley began his charge by noting that some members would soon be going into places too dangerous to name publicly. "This is a day of great joy but also a day of sobering reality," Kelley said. He noted the importance of the day "because of what we see in the world around us." Kelley explained that the course of history is marked by pivotal, epic-making moments. Kelley pointed to the Battle of the Bulge in WWII where German forces broke through the Allied line but were held back by American paratroopers long enough to allow Gen. George S. Patton, Jr. to reposition his tanks, and ultimately secure victory. "It was an epic moment," Kelley said. "That's what happened when Jesus came into the world." 'God with us' matters because nothing can come against the believer committed to God, Kelley said. There are no dead ends where God leads, he explained. "'God with us' changes everything," Kelley … END_OF_DOCUMENT_TOKEN_TO_BE_REPLACED 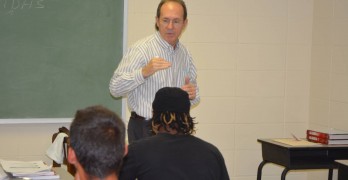 By Brian Blackwell, Message Staff Writer PINEVILLE – A high school for adults age 19 and older operated by a Louisiana Baptist church has received state approval to operate as a non-public school. The move now allows students to take advantage of financial aid that was not available before this year and positions the school for a brighter future, school leaders say. “It’s a ministry for us,” said Dan Davis, director of the year-round school. “There is a need and I believe if there is a need, there’s a ministry. There’s a need to give adults a chance at an alternative to the GED program. Plus, we’re giving them the gospel.” Located at Trinity Baptist Church in Pineville, the year-round school allows students who lack anywhere from a few credits to a few years of high school to attend classes and take a test to earn their high school degree. The school charges a maximum tuition of $665 for the entirety a student is enrolled. A new student can enroll every eight weeks. Two years after opening its doors, Trinity High School saw the first graduates in 2005. The school has been operating as a Christian accredited entity but in June received non-public school approval by the Louisiana Board of Elementary and Secondary … END_OF_DOCUMENT_TOKEN_TO_BE_REPLACED 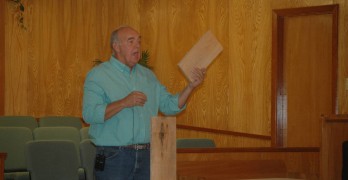 By Brian Blackwell, Message Staff Writer PINEVILLE – Leo Lytle believes in some ways living the Christian life is akin to making a door and he shared why he thinks this during visits to two Louisiana Baptist churches recently. “Most of us are like this wood,” said Lytle, a woodworker and former Louisiana Baptist pastor, during one of his presentations. “And He takes us as we are. He begins to mold us out in this place He wants us to be in the body of Christ.” Starting with just pieces of wood, Lytle slowly assembled a door. Throughout the presentations at both Lakeside Baptist Church and Esler Baptist Church in Pineville, Lytle called on members of the audience to assist at various points and presented the Gospel in between his creation of a door. Lytle began making these presentations a year ago. Speaking to a woodworking club in Nacogdoches, Texas, near where he now lives, Lytle gave a different talk than what these men were accustomed to hearing. Instead of run-of-the-mill tips on woodworking, Lytle used the opportunity to share the Gospel and teach about the church. The presentation went so well that Lytle decided to build as ministry around it. Though he has presented his message as far away as Kentucky, most … END_OF_DOCUMENT_TOKEN_TO_BE_REPLACED 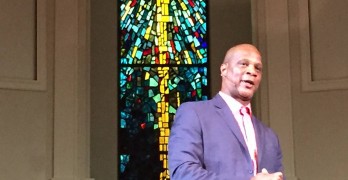 By Jamie Stephens, Regional Reporter RUSTON – Power-hitting outfielder Darryl Strawberry, who played for four major league teams, was considered one of baseball's biggest stars in the 1980s--before his career was derailed by substance-abuse problems. During 17 seasons he helped lead the New York Mets to a World Series championship (1986) and the New York Yankees to three World Series championships (1996, 1998 and 1999). A popular player of that era, Strawberry, a right fielder, was voted to the Major League Baseball All-Star Game eight straight times (1984–1991). Despite being one of the most feared sluggers in the game, he also was suspended three times by Major League Baseball for substance abuse.  He was in and out of drug-treatment centers for much of the late '90s and early 2000s. He went AWOL from one program multiple times, was kicked out of another, and, then he was sentenced to 18 months in prison for probation violations in April 2002. He had two marriages fail during this time, too. "I was once very lost and tormented, but now I have been found and I am free in Christ Jesus. I want everyone to experience the saving and transforming power of Jesus Christ,” Strawberry said. He came to First Baptist … END_OF_DOCUMENT_TOKEN_TO_BE_REPLACED 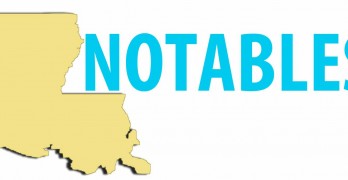 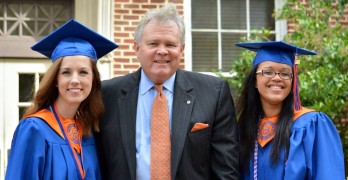 By Philip Timothy, Message Managing Editor PINEVILLE – Long before a student even knew what career they intended to pursue, God had not only  determined what that career would be but had also prepared the way to obtain it. Speaking at Louisiana College’s 159th commencement ceremonies Dec. 12, Miranda Klein’s message to the gathering and the graduates was a simple one, “All of us are about to move on and graduate to the most important job in the world not because we chose it but because it was the one prepared by God for us.” In continuing a tradition begun by LC President Rick Brewer at last spring’s commencement, two graduates – Klein and Dallis Coleman – addressed the audience and the graduates. “Even before most of us had an inkling of what we wanted our future to be God knew," said Klein, who is married to LC alumnus Mark Klein, who received his degree in the spring. "There are no sacred or secular jobs, just those prepared for us by the Lord." Coleman, a veteran of the US Air Force and mother of two, talked about her experience in completing LC’s Accelerated Bachelor of Science in Nursing. Coleman’s husband is stationed at Barksdale AFB in Shreveport. Louisiana College conferred degrees to 135 graduates at … END_OF_DOCUMENT_TOKEN_TO_BE_REPLACED 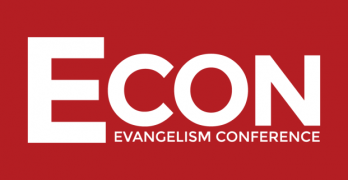 By Brian Blackwell, Message Staff Writer LAFAYETTE – Reaching the Next Generation and Every People Group are two aims of the 2016 Louisiana Baptist Evangelism Conference (ECON) – with a focus on moving Louisiana Baptists closer to achieving the goals of the President’s 2020 Commission Report. Evangelism & Church Growth Team Director Wayne Jenkins believes this year’s lineup of featured speakers and worship leaders will be able to accomplish this task. “ECON 2016 is a conference for the entire church,” Jenkins said. “Along with great music and powerful preaching, pastors and church members alike will be able to take home ideas from the breakout sessions about how to reach these two audiences in their community.” First Bapitst Church Lafayette will host this year’s ECON from Jan. 25-26. Based on 1 Corinthians 9:22, this year’s ECON seeks to inspire, lift spirits and provide participants with a number of unique fellowship opportunities. Preceding ECON two days earlier [Jan. 22-23], First Lafayette will also host the Hispanic Evangelism Conference. Here is a brief profile on this year’s speakers: STEVE GAINES Steve Gaines, pastor of Bellevue Baptist Church in Memphis, Tenn., is a firm believer in prayer and … END_OF_DOCUMENT_TOKEN_TO_BE_REPLACED 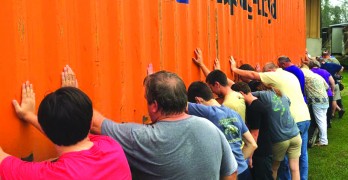 By Philip Timothy, Message Managing Editor COVINGTON – You would think just about everyone has heard, contributed or volunteered for Samaritan’s Purse’s Operation Christmas Child. Since 1993, the project, which was begun by Franklin Graham, son of Billy Graham, has collected and delivered more than 124 million gift-filled shoeboxes to children in more than 150 countries and territories just in time for Christmas. This year, the project, which has more than 100,000 volunteers involved in collecting, shipping and distributing these shoeboxes, estimates it will collect enough shoeboxes to reach another 11 million children. Yet, there is another ministry, albeit a much smaller one, who will also be bringing plenty of smiles and a lot of memories to several hundred children this Christmas as well. The ministry is Fairhaven Ministries, located just 10 miles outside of Covington in rural southeast Louisiana. For more than 40 years Johnny and Sissie Huffman have been faithfully serving the Lord at Fairhaven Children’s Home by ministering to children in their care – 15 at last count – as well as their community and communities in the Appalachian Mountains, the Mississippi Delta and on Indian reservations in Montana and … END_OF_DOCUMENT_TOKEN_TO_BE_REPLACED 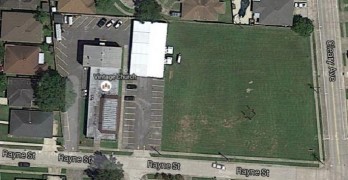 By Message Staff METAIRIE – Vintage Church, a Louisiana Baptist congregation, has filed a lawsuit against the Jefferson Parish Sheriff’s Office and Jefferson Parish, because of a dispute regarding sound levels during Sunday worship services conducted in a tent serving as the congregation’s temporary meeting area. The tent, erected in August, is intended to be a short term arrangement while the congregation expands attendance capacity in its permanent building—a project estimated for completion in nine or 10 months. The petition filed jointly by local attorney Roy Bowes and the Liberty Institute, a non-profit law firm which focuses on religious liberty issues, accuses Sheriff Newell Normand and his officers of intimidation tactics in attempting to essentially shut down weekly worship services because of noise complaints by a single individual, and they also describe the noise level ordinances as flawed. On the other side, at least one neighbor in the community claims the church is not being considerate by allowing musicians to warm up as early as 7 a.m. Sundays, and she claims she is not alone in opposing the noise levels coming from the tent. “The 911 calls will show that it’s not just me,” said Lisa Caracci, who … END_OF_DOCUMENT_TOKEN_TO_BE_REPLACED 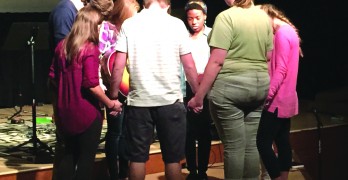 By Brian Blackwell, Message Staff Writer HAMMOND – Southeastern Louisiana University student Katie Wimbish told God she could not obey his command to disciple other believers – not long after that she met a student named Allison, a visitor to the Baptist Collegiate Ministry free dinner. Throughout the evening, Wimbish introduced the student to other BCM members, sharing the Good News and Christ’s love, and by the end of the night Allison had accepted Christ as her personal Lord and Savior. The connection blossomed into something Wimbish had rejected days earlier – a mentoring relationship with a new Christian. “Allison came into my life right after I told God no to His call to disciple someone,” she recalled. “I told Him that my life wasn’t good enough yet, that my depression was too bad. No one could ever learn anything from me, etc. but Allison came. She told me I was exactly what she’s been needing.  It turns out that she was exactly what I needed as well.” Similar stories of changed lives through Christ are commonplace this semester at the BCM. In late October, three students accepted Christ and another 50 made a decision to share Christ with their friends and families as part of a two-day effort known as … END_OF_DOCUMENT_TOKEN_TO_BE_REPLACED