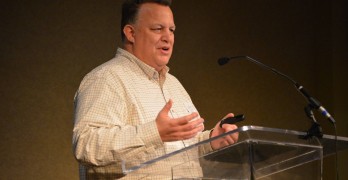 By Brian Blackwell, Message Staff Writer ALEXANDRIA – There are times when a believer comes to a major crossroads – when God issues an invitation to join Him in what He is doing, will you be willing to trust Him. “It’s a crisis of faith,” Tom Blackaby said. “Will you step forward in faith or step back and say I can’t go there, it will cost too much to follow you? You have to decide – is God God? Is He the truly Lord of your life? If you say yes, you have to make major adjustments in your life.” Blackaby spoke on Feb. 16 at the Louisiana Baptist Building about the seven steps for knowing, doing and experiencing the will of God. His two-day stay in the state for the Experiencing God Tour also included Natalbany Baptist Church before coming to Alexandria. He will also speak at Northwest Louisiana Baptist Association office in Shreveport from 1 to 3:30 pm on Feb. 17. He is the second son of bestselling author Dr. Henry Blackaby. He has written or co-authored numerous books, including The Man God Uses, Experiencing God at Home, and 7 Steps for Knowing, Doing and Experiencing the Will of God. He currently is senior pastor of Brookswood Baptist Church in Langley, British Columbia. Blackaby shared the seven steps for … END_OF_DOCUMENT_TOKEN_TO_BE_REPLACED 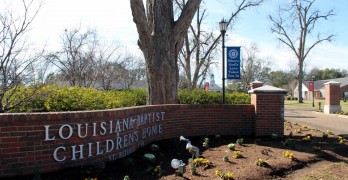 By Message Staff The Louisiana Baptist Children’s Home & Family Ministries is warning others about an email sent from a company that is using the ministry for possible solicitation. Children’s Home President and CEO Perry Hancock said he learned that Cornerstone Kingdom Processing had sent out an e-mail, with the subject line “Louisiana Baptist Children’s Home.” He said Cornerstone Kingdom Processing is not endorsed by the Children’s Home and that anyone receiving such an e-mail should disregard the message. Hancock said he called the person who sent the e-mail and notified him to stop sending further messages using the Children’s Home name. “We do not know him and aren’t doing business with him,” Hancock said. “Please delete the e-mail and block the sender.” … END_OF_DOCUMENT_TOKEN_TO_BE_REPLACED 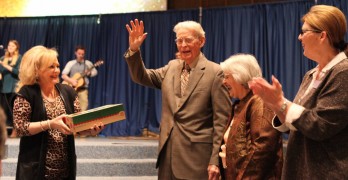 By Norm Miller, LC communications PINEVILLE – LC officials surprised Leon Hyatt and his wife Ann with a birthday cake during the college's February 11 chapel service, which was the day Leon turned 90 years old. Several times Leon served as an LC trustee, and he was a long-time Baptist pastor in Louisiana. Recently, Leon gave his pastoral library of some 6,000 volumes to the college. "Though I have known Leon for a short time, I have a sincere appreciation for his long-standing service to Louisiana Baptists and for his unswerving love for his alma mater," said Dr. Rick Brewer, LC's president. … END_OF_DOCUMENT_TOKEN_TO_BE_REPLACED 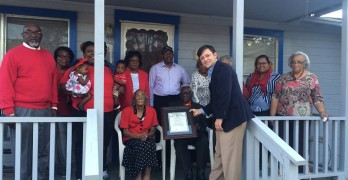 Bossier City – Louisiana Family Forum recently honored Louisiana’s top ten longest married couples during a special reception at the Governor’s Mansion on Feb. 12. The longest-known married couples are honored by Louisiana Family Forum each year to encourage individual marriages, build a stronger marriage culture and to remind those in the state that lifelong marriages benefit everyone. Louisiana State Rep. Mike Johnson honored Louisiana's longest known married couple, Lawrence and Varrie Player, during a reception at their home in Benton. They have been married 81 years. A reception also was held for the second-longest married couple, Will Henry and Virgina Teasley, at their home in Bryceland. The couple has been married for 79 years. Each couple was presented an official statement of special recognition from Louisiana Gov. John Bel Edwards. Their names also are entered into Louisiana Family Forum’s Marriage Hall of Fame. “It is a true delight to honor these two great couples for their examples and their commitment,” Johnson said.  “In a day when the stability of so many marriages and families is in jeopardy, these folks stand out as exceptional models for all of us.” … END_OF_DOCUMENT_TOKEN_TO_BE_REPLACED 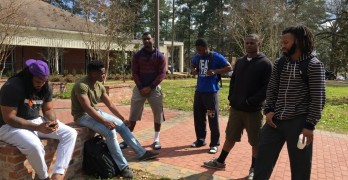 By Brian Blackwell, Message Staff Writer Louisiana Governor John Bel Edwards took to the airwaves Thursday night in an effort to convince citizens of the state additional revenue is needed to shore up what he says is a nearly $1 billion gap in the state budget or the outcome would be dire. If higher taxes and major cuts are not put into place, Edwards told voters, devastating consequences could occur such as closure of universities, elimination of health care services and even the possibility of no college football taking place in 2016. The state faces a $943 million shortfall this year and possibly a $2 billion deficit in the next fiscal cycle, according to Edwards’ staff. “To stabilize our state's budget we should not shy away from the fiscal right sizing that is needed,” Edwards said during his 12-minute speech that aired on television and radio stations throughout the state. “For me ‘right sizing’ requires that we get both the spending and revenue right. Focusing on one without the other would be irresponsible. “But, I want you to understand that, if left unresolved -- if the legislature does not choose a way to raise additional dollars to strengthen the budget -- very soon, we will face unimaginable cuts to vital … END_OF_DOCUMENT_TOKEN_TO_BE_REPLACED 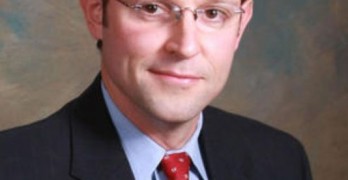 By Staff, Baptist Message BOSSIER CITY – State representative Mike Johnson (R-Bossier City) officially announced Feb. 9 his candidacy for the 4th Congressional District seat. Johnson will join fellow Republicans Dr. Trey Baucum, a Shreveport cardiologist, and Elbert L. Guillory, a former member of the Louisiana State Senate representing District 24, who announced their intentions earlier this month. Other Republicans who have expressed interest include: state Rep. Jim Morris, R-Oil City; Shreveport attorney Rick John; "Rocky" Rockett, president of the Greater Bossier Economic Development Foundation, and Shreveport Councilman Oliver Jenkins. Rep. Patrick Jefferson of Arcadia has been the lone Democrat who said he is evaluating the race. Incumbent 4th District U.S. Rep. John Fleming (R-Minden) is giving up the seat to run for the U.S. Senate seat being vacated by David Vitter in 2017. “Washington, D.C. has grown completely out of control, and our country has lost its moral compass. I’m running for Congress to defend our freedoms, restore our conservative principles, and get American back on the right course,” said the 44-year-old Johnson. He was elected to the Louisiana Legislature in 2015 when 26th Judicial … END_OF_DOCUMENT_TOKEN_TO_BE_REPLACED 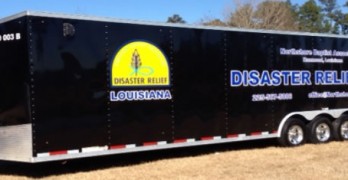 By Message Staff COVINGTON – Four months after suspected arson caused extensive damage to Bayou Baptist Church in Slidell, another facility in the Northshore Baptist Association has been victimized by criminals. At least $20,000 worth of disaster relief equipment from the chainsaw unit for Woodland Park Baptist Church in Hammond and the feeding unit for the association was stolen between Jan. 24 and Feb. 5, according to Director of Missions Lonnie Wascom. Stolen items include eight Stihl chainsaws, tools, tables, a commercial grade pneumatic can opener, compressors, stainless steel preparation tables, propane burners and the full range of feeding unit equipment. An investigation is ongoing to find those responsible for stealing the equipment. “The detective in charge and I have talked and he is asking people to keep an eye on social media for the posting of anything that looks or sounds like our stuff,” Wascom said. “They are processing the locks that were penetrated at the crime lab and he is asking for tips. The trailers were stored where they can be seen, thinking no one would want to break in to them being they were where everyone driving could see them. “We want it all back,” Wascom said. “We want to be up … END_OF_DOCUMENT_TOKEN_TO_BE_REPLACED 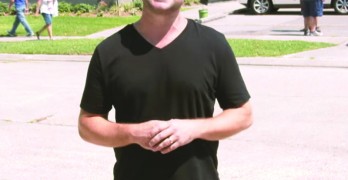 By Staff, Baptist Message METAIRIE  -- Liberty Institute has filed an appeal on behalf of Vintage Church, a Louisiana Baptist congregation involved in a dispute regarding noise levels during its Sunday morning services. According to a press release by the non-profit law firm which focuses on religious liberty issues, the Liberty Institute along with volunteer attorney Roy Bowes filed the appeal today with the Louisiana Fifth Circuit Court of Appeals. Vintage Church, located in Metairie, has met in a tent since August while its sanctuary is undergoing construction. The church filed a lawsuit against Jefferson Parish Sheriff Newell Normand and his officers, saying they used intimidation tactics in an attempt to shut down its weekly worship services because of noise complaints by a single individual. The suit also described the noise level ordinances as flawed. Pastor Rob Wilton said the church was trying to be a good neighbor by hiring technicians to ensure sound levels would not exceed 60 decibels, the limit being imposed on the church which equates to the noise of a running dishwasher, and my moving to acoustical guitars with no amplifications. A judge on Dec. 22 declined to issue an injunction against the Jefferson … END_OF_DOCUMENT_TOKEN_TO_BE_REPLACED 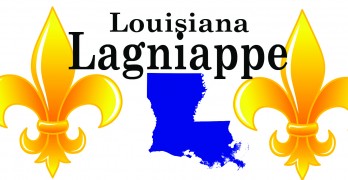 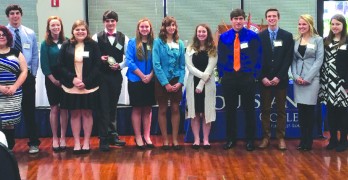 By Staff, Baptist Message PINEVILLE – Bossier City senior Makayla Anderson won Louisiana College’s prestigious Smith Scholarship Competition Jan. 30. The Parkway High senior excelled in the competition, winning over 13 other invitees a scholarship that covers every expense at LC, including tuition, fees, books, residence and meals. All others received LC’s next highest scholarship offer for entering the competition. Anderson, who plans on studying biology, said she was shocked when she heard her name called by LC President Rick Brewer. “Honestly it’s so unreal to even be considered,” said Anderson, who plans on becoming an oncologist. “So to be actually presented with the award is such an honor and an accomplishment I’ll cherish forever. It’s such a blessing and shock is mainly my emotion right now.” The competition has been dominated by home-schoolers who have won five out of the last eight years. “Whether from public, private or homeschool, the Smith Scholarship award draws the best and brightest students from our region to Louisiana College,” Brewer said. “Every applicant was worthy considering the criteria to win, and we are grateful for their interest in Louisiana College.” During the actual competition, … END_OF_DOCUMENT_TOKEN_TO_BE_REPLACED

By Lane Corley Olive trees produce one of the most desired and sought after fruits around the world. The trees can live for thousands of years. The olive and the olive tree is spoke of in the Bible on numerous occasions. Including a few references to family life, like in Psalms 128:3 – “Your children will be … END_OF_DOCUMENT_TOKEN_TO_BE_REPLACED