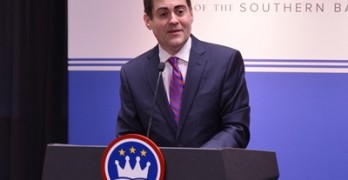 By Tom Strode, Baptist Press WASHINGTON (BP) - Oppressed Christians and other religious adherents around the world stand to benefit from recent actions by the United States government. The House of Representatives approved reauthorization of the U.S. Commission on International Religious Freedom (USCIRF) in a voice vote Oct. 6. The Senate passed the same legislation without opposition Sept. 30. The measure, awaiting President Obama's signature, will extend the authority of a bipartisan panel that serves as a watchdog on global religious liberty conditions. Congressional action to renew USCIRF's mission came shortly after Obama selected one of the commission's own staffers as the first special advisor for religious minorities in the Near East and South/Central Asia. David Saperstein, the U.S. ambassador at large for international religious freedom, announced the appointment of Knox Thames to the new post Sept. 16. Thames, formerly USCIRF's director of policy and research, began work in the State Department's Office of International Religious Freedom Sept. 28. Russell Moore, president of the Southern Baptist Ethics & Religious Liberty Commission (ERLC), applauded both developments. He expressed gratitude Congress … END_OF_DOCUMENT_TOKEN_TO_BE_REPLACED 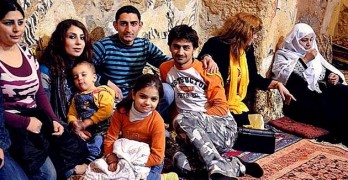 By Kelly Ledbetter, Christian Examiner SWEIDA, Syria (Christian Examiner) – After a car bomb went off in his city last month, a pastor is faced again with the choice to flee the encroaching reach of ISIS in Syria, but he doesn't want to leave his new church. In a report from Christian Aid Mission, the pastor, whose name has been withheld for security reasons, speaks out about his precarious situation, his fears for his family and church, and why he won't leave. "As ISIS pushes westward inside Syria, Christians are in the crosshairs," said the Middle East director of Christian Aid Mission. "They're running out of places where they can safely flee." To read the rest of the article, click here. … END_OF_DOCUMENT_TOKEN_TO_BE_REPLACED 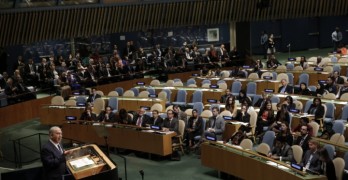 By Gregory Tomlin, Christian Examiner NEW YORK (Christian Examiner) – Israeli Prime Minister Benjamin Netanyahu stood in front of the United Nations 70th General Assembly Oct. 1 and excoriated world leaders for their acceptance of the Iran nuclear deal negotiated by the United States and other western powers. The deal, which will grant Iran the right to eventually resume the enrichment of uranium and develop its ballistic missile program after a period of seven years, is now a matter of record at the world body. It is in the United States, as well, as Republicans failed to muster the votes necessary to kill it in the Senate where, according to the Constitution, it should have been handled as a treaty. To read the rest of the article, click here.   … END_OF_DOCUMENT_TOKEN_TO_BE_REPLACED 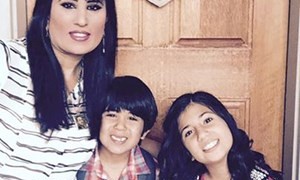 By Morning Star News ISTANBUL, Turkey, (BP) - Iranian President Hassan Rouhani Monday (Sept. 30) declined to meet with the wife of imprisoned American pastor Saeed Abedini during his trip to the United Nations, days after the Christian's wife learned her husband had recently been tortured. Rouhani instead said in a television interview that releasing Iranian criminals held in U.S. prisons would change the "atmosphere and environment," hinting that such a change would be necessary for possibly freeing prisoners such as Abedini. The Iranians in question were sentenced to prison for violating the international trade embargo placed on Iran for trying to develop nuclear weapons, Rouhani said. "There are a number of Iranians in the United States who are imprisoned, who went to prison as a result of activities related to the nuclear industry in Iran. Once these sanctions have been lifted, why keep those folks in American prisons? So they must be freed," he said Sept. 27 on CNN through an interpreter. "If the Americans take the appropriate actions vis-a-vis Iranian citizens who are being imprisoned here, then the right atmosphere and environment will be created for reciprocal action perhaps." Rouhani left New York Monday … END_OF_DOCUMENT_TOKEN_TO_BE_REPLACED 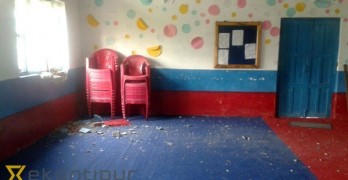 By Kelly Ledbetter, Christian Examiner KATHMANDU, Nepal (Christian Examiner) – Two Nepal churches were bombed in a series of focused attacks suspected to be releated to extremist Hindu groups who wanted a "Hindu" constitution in mid-September -- an action that had just failed to muster legislative action. Instead Nepal was kept a secular state just prior to the attacks. The bombs detonated in two churches, while a bomb found at another church exploded later after it was taken to a police station, injuring three police officers. The churches were targeted in a Sept. 15 attack in Jhota, an eastern district of Nepal, in the likely retaliation for legislation that was supported to keep Nepal a secular state. To read the rest of the article, click here. … END_OF_DOCUMENT_TOKEN_TO_BE_REPLACED 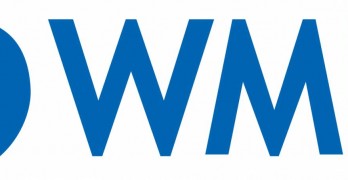 By Julie Walters, WMU BIRMINGHAM, Ala. (BP) -- As International Mission Board personnel who are eligible for the organization's voluntary retirement incentive prayerfully consider God's leading, Woman's Missionary Union leaders are calling for more intense prayer and support for Southern Baptist missionaries. "Ongoing, focused prayer for our missionaries has always been a foundational component of missions discipleship through WMU," said Wanda S. Lee, executive director of national WMU. "It is both a privilege and responsibility to lift up our missionaries in prayer, and so vital right now as they are making potentially life-changing decisions." National WMU will host a special time of prayer for international missionaries during an observance of the Week of Prayer for International Missions at WMU's headquarters in Birmingham, Ala., Dec. 3. In addition to prayer, WMU is seeking to help missionaries who decide to return to the U.S. with housing and transportation. Missionary housing has long been a ministry provided by WMU through a password-protected database of available housing for missionaries. WMU provides counsel to those who want to learn more about starting a missionary house ministry and facilitates … END_OF_DOCUMENT_TOKEN_TO_BE_REPLACED 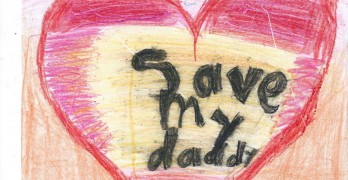 By Diana Chandler, Baptist Press NASHVILLE (BP) - The wife of imprisoned American pastor Saeed Abedini is on a 21-day "Daniel" fast and is organizing prayer vigils internationally Sept. 26, the third anniversary of her husband's imprisonment in Iran for his Christian faith. Naghmeh Abedini, in asking Christians to pray for her husband and the persecuted church, also is promoting a letter-writing campaign to ask United Nations Secretary General Ban Ki-Moon to advocate for Abedini's release when Iranian President Hassan Rouhani speaks Sept. 28 at the U.N. General Assembly in New York. Naghmeh Abedini will attend a prayer rally for her husband and other persecuted Christians at 7 p.m. Sept. 28 at Calvary Chapel in Old Bridge, N.J. In advance of the U.N. sessions that began Sept. 15, she addressed over 100 members of parliaments from 50 nations who held a meeting on international religious freedom in New York, urging the lawmakers to take action in their home countries to encourage her husband's release. Imprisonment is taking its toll on 35-year-old pastor, his wife said on Facebook today (Sept. 16), but he was encouraged to learn of the prayer vigils today from a family member, the first visitor Iran has allowed him in … END_OF_DOCUMENT_TOKEN_TO_BE_REPLACED 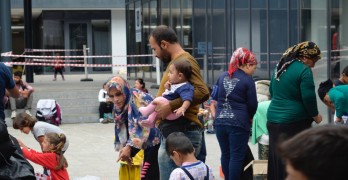 By Travis Wussow, Southern Baptist Ethics & Religious Commission EDITOR'S NOTE: A FAQ (Frequently Asked Questions) about the Syrian refugee crisis follows this article.</i> NASHVILLE (BP) - Turkey's shores received the body of 3-year-old Aylan Kurdi minutes after a small boat capsized while carrying him into the Mediterranean in early September with his father, mother and 4-year-old brother and other refugees from the Syrian Civil War. They left with hope of finding safety and security. Instead, Aylan and his brother became two of more than 11,000 children -- at least 230 of whom were also 3 years old -- killed as a result of the war, as recounted in a Washington Post report on Sept. 5. Aylan's mother also died. But Aylan will never be forgotten, because a nearby photographer made him an international symbol of the Syrian refugees' plight. Also not to be forgotten: the reports of systemic rape and sexual slavery of women across Syria and Iraq. The so-called Islamic State continues to wreak havoc in the region, its campaign of terror emanating from Raqqa, Syria, its de facto capital. The world is presented with the worst refugee crisis since World War II. Nearly 8 million Syrians have been internally … END_OF_DOCUMENT_TOKEN_TO_BE_REPLACED 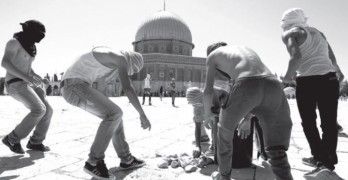 ERUSALEM (Christian Examiner) – A spokesman for the Palestinian terror group Hamas, which claims in its charter its desire to annihilate Israel, said Hamas militants are ready to commit "martyrdom" operations to defend the Al Aqsa mosque on the Temple Mount, the Iranian News Agency has reported. Hamas spokesman Mushir al­-Masri said the mosque needed to be defended from the "occupiers," or the Jews, after Israeli police and soldiers raided the Temple Mount Sunday, Sept. 13, while Muslim worshippers were inside the mosque. “Any more provocation in Jerusalem will affect the relationship between Jordan and Israel.” - King Abdullah II of Jordan The police took action after Palestinian youths tried to disrupt the visit to the Temple Mount of both Jews and foreign tourists on the eve of Rosh Hashanah, which began at sunset. Rosh Hashanah is the Jewish New Year.] To read more, go to the Christian Examiner website. … END_OF_DOCUMENT_TOKEN_TO_BE_REPLACED

By Gregory Tomlin, Christian Examiner NEW YORK (Christian Examiner) – Iran's Ayatollah Ali Khamenei has issued another dire warning for Israel – the clock is winding down on the Jewish state. The religious leader said via his Twitter feed Sept. 9 that Israel "will not see the next 25 years," even after nuclear negotiations with the world powers are supposed to have curtailed Iran's ambition for nuclear weapons. "God willing, there will be no such thing as a Zionist regime in 25 years," Khamenei wrote on the social media site. According to Khamenei, until Iran is able to complete its goal of the complete annihilation of Israel, "the struggling, heroic and jihadi morale will leave no moment of security for Zionists." The quote, according to the Times of Israel, was taken from a speech the Ayatollah had given earlier in the day. The speech was also reported in Iranian media. In the speech, Khamenei blasted the United States, which he said had been "hypocritical" in its approach toward Iran as U.S. negotiators smiled while Congress sought to derail the plan. He also claimed the U.S. – still "the Great Satan" – was using the negotiations as a means to influence and "infiltrate" Iran. To read more, visit the Christian … END_OF_DOCUMENT_TOKEN_TO_BE_REPLACED

By David Jeremiah EL CAJON, Calif. (BP) - Something strange happens to the psyche of a nation in difficult times. The downtrodden begin to resent government and wealthy corporations and individuals, seeing them as out of touch with, if not the cause of, their plight. Desperation can lead to a reversal of … END_OF_DOCUMENT_TOKEN_TO_BE_REPLACED