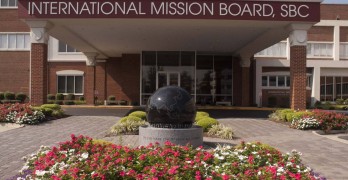 By Will Hall, Message Editor ALEXANDRIA – In a Jan. 14 press statement, the International Mission Board of the Southern Baptist Convention announced it was eliminating its Richmond Communications Center, firing 30 personnel and transferring another 10 to other positions. The move comes as the IMB completes its release of 600-800 missionaries who were asked either to take a Voluntary Retirement Incentive (offered to personnel 50 and older with five or more years of service) or be volunteers in a Hand Raising Opportunity which “offers missionaries and stateside staff members the opportunity to transition outside the IMB if they believe God is leading them to a new place of involvement in mission.” IMB described the overall number of terminations in voluntary terms stating no missionaries were “required” to leave the mission field as part of its “two-phase reset.” However, the fired Richmond staff members include career veterans who have deployed around the globe, including in dangerous restricted areas, in order to get the stories of Southern Baptists’ cooperative mission work overseas. SELF-INFLICTED Moreover, the termination actions for all involved IMB personnel were dictated by a financial crisis IMB President … END_OF_DOCUMENT_TOKEN_TO_BE_REPLACED 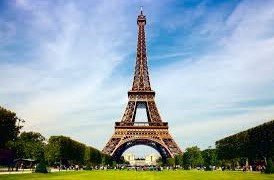 Burke, VA, December 14, 2015- "The agreement Reached at the Paris climate summit is worse than a failure," said Dr. E. Calvin Beisner, Founder and National Spokesman of The Cornwall Alliance for the Stewardship of Creation. "The 'Commitments' made in the Paris agreement are voluntary and unenforceable," Beisner said, "which means most nations will not comply. EU nations said They would make binding Commitments only if all major emitters did-and They Did not. So the EU's 'Commitments' lose all substance. " China and India, the # 1 and # 3 CO2 emitting nations, plan for Their emissions to keep rising at least until 2030 and Reductions even in rate of growth later will depend on Whether They can be made without slowing Their rise out of poverty. Other Developing Countries' "Commitments" are similar. "That's perfectly understandable," Beisner said. "Risks from poverty are far greater than from climate change, so whatever slows economic growth means greater harm than global warming." That thinking is behind the Cornwall Alliance's petition, Forget 'Climate Change', Energy Empowers the Poor. Full compliance with the Paris agreement would cost Hundreds of billions of dollars per year beginning now and rise to $ 1-2 Trillion … END_OF_DOCUMENT_TOKEN_TO_BE_REPLACED 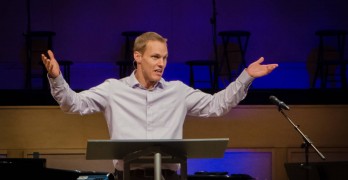 By David Roach, Baptist Press RICHMOND, Va. (BP) - With the International Mission Board expecting hundreds of missionaries to leave their positions in the coming months, the board has published a list of ways individuals and churches can support field personnel returning to the U.S. According to a Q&A posted on the IMB website and updated Nov. 18, at least 600 field personnel and stateside staff members are expected to resign as a result of a voluntary retirement incentive (VRI) offered to all personnel 50 and older with five or more years of service and a subsequent "hand-raising opportunity" for all remaining personnel to indicate a call from God to pursue non-IMB ministry opportunities. An undated document titled "Ways to Support Your Field Personnel as they Return to the U.S." recommends that churches form "re-entry teams" to assist returning missionaries with practical services, friendship and prayer. Among the IMB's suggestions: -- Let returning missionaries talk about their experiences. "Perhaps you could interview them during a worship service, invite them to lead a prayer time or share during Life Group or Sunday School times," the document states. -- Be sensitive to culture shock as missionaries … END_OF_DOCUMENT_TOKEN_TO_BE_REPLACED 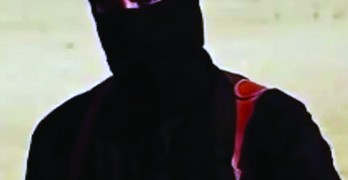 By Will Hall, Message Editor 30 civilians as well as the related stepped up air attacks against Islamic State militants in Syria are both successes for ISIS. On the one hand its strategic objectives have been enhanced by the terror and chaos created within Western nations it considers enemies – France, Belgium, Germany and the United States among them. On the other hand, the severe military response ISIS has provoked fits into the bizarre end time prophecies that are prompting the group to be so barbaric in its atrocities against the countries it has incited. TERRORISM & THEOLOGY Paris was placed under curfew, the first since 1944, after gunmen and suicide bombers coordinated separate attacks targeting restaurants, a rock concert and a sports stadium Nov. 13, killing 130. France’s President Hollande also ordered the country’s borders sealed and lawmakers voted to extend a national state of emergency through at least February 2016. Brussels officials, meanwhile, declared a terror alert Nov. 22, closing schools and putting troops on patrol in the streets while conducting raids (21 arrests so far) to locate suspects connected to the Paris terrorism. The rest of Belgium remains on high alert, but below level four … END_OF_DOCUMENT_TOKEN_TO_BE_REPLACED 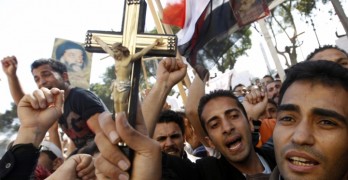 By Gregory Tomlin, Christian Examiner CAIRO (Christian Examiner) – A Coptic Christian Church in Minya, Egypt, burned down by the Muslim Brotherhood in the wake of the Arab Spring riots, has been rebuilt by the Egyptian military, the Egyptian news source Watani has reported. Parishioners gathered at the church of Amir Tadros, or St. Theodore, to celebrate the church's reopening Nov. 14. It was one of 100 Christian churches, houses and Christian establishments firebombed in the country during riots there in 2013, shortly after the Muslim Brotherhood took power – and then lost it after failing to provide essential civil services and wreaking havoc on the nation's non-Muslim minority communities. Muhammad Morsi, who led the Muslim Brotherhood, was recently charged with torturing his political opponents, but he also has been found guilty of helping more than 100 militant Islamists escape from prison during the 2011 revolts that ushered him into power. For that crime, Morsi has been sentenced to death. Morsi deposed then President Hosni Mubarak, a long-time ally of the United States and a peacemaker with Israel. In August 2013, the Algemeiner, a Middle East news source, said its Investigative Project on Terrorism had … END_OF_DOCUMENT_TOKEN_TO_BE_REPLACED 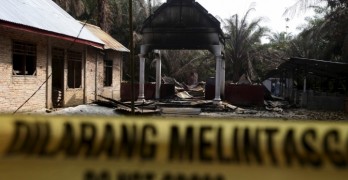 By Kelly Ledbetter, Christian Examiner ACEH SINGKIL, Indonesia (Christian Examiner) – After Muslim hard-liners burned churches in Aceh Singkil on the island of Sumatra, over 8,000 people fled religious violence that has been building in Aceh province since a 2006 law discriminated against religious minorities. The religious harmony law requires signatures of the religious majority, which is Islam in Indonesia, before a church may be built. Conflicts about church permits, which few possess, have escalated into discrimination involving mobs burning and looting in violence that has killed at least one person, according to World Watch Monitor. Erde Burutu, a pastor of Pakpak Dairi Christian Protestant Church, which was burned in October, said temporarily displaced Christians who are returning to Aceh are afraid. "There is no guarantee of safety from the state," he told WWM. "For us, safety goes beyond the physical; it means that we can have our church back and exercise our freedom to worship." After burning the Indonesian Christian Church on Oct. 13, the mob circulated a message that read: "We will not stop hunting Christians and burning churches. Christians are Allah's enemies!" Since the 2006 law was passed, thousands … END_OF_DOCUMENT_TOKEN_TO_BE_REPLACED

By Todd Starnes, Christian Examiner The nation was forced to endure yet more pious prattling from President Obama this week who spent time berating Americans who are worried about Islamic jihadists hell-bent on blowing us all to kingdom come. “When individuals say that we should have a religious test and that only Christians – proven Christians should be admitted – that’s offensive and contrary to American values, the president said – just one day after he called such behavior un-American. What’s offensive and contrary to American values is refusing to properly investigate those wanting to come to our nation – especially those coming from regions that are hotbeds of Islamic extremism. “Those of us who fear that Islamic radicals might be lurking among the refugees have been called every name in the book: bigots, Islamophobes and un-American. But the cold hard reality is that Protestants, Catholics and Jews aren't the ones beheading people,” said Obama. But the president says such prudence only further enflames the Islamic jihadists. “ISIL seeks to exploit the idea that there is a war between Islam and the West,” he said. “When you starting seeing individuals in positions of responsibility suggesting that … END_OF_DOCUMENT_TOKEN_TO_BE_REPLACED 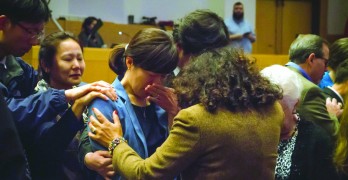 By Marilyn Stewart, Regional Reporter NEW ORLEANS – In a moving service focused on God’s faithfulness in a world dangerous and desperate without Christ, thirty-five International Mission Board missionary candidates were commissioned by IMB trustees at First Baptist Church, New Orleans, Nov. 8. The event came at the end of the annual IMB board of trustees meeting held this year on the New Orleans Baptist Theological Seminary campus and coincided with the annual NOBTS Global Missions Week. During the week, IMB personnel spoke in the NOBTS chapel, classes, and in focused breakout sessions. John Edie, IMB board of trustees chairman and member of Second Baptist Church in Springfield, Mo., introduced to the near-capacity crowd the “next wave” of Southern Baptist missionaries and noted the board’s unanimous approval of their appointments. He then turned to the appointees. “What I never cease to be amazed at is the look in your eye when you tell me you are going to the farthest, most remote, most difficult places in the world. And there’s no fear,” Edie said. “The reason is because of the One we serve, the One who’s still in charge.” Addressing the appointees’ family members in attendance, Edie said, “I assure you that in … END_OF_DOCUMENT_TOKEN_TO_BE_REPLACED 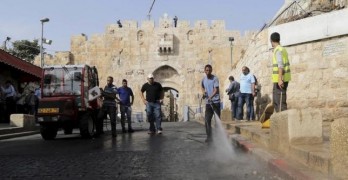 By Kelly Ledbetter, Christian Examiner JERUSALEM (Christian Examiner) – Rumors of a third intifada, or Palestinian uprising, are growing amid a rash of stabbing attacks by Palestinians that have occurred, centering on Jerusalem, throughout October. On Monday, a 13-year-old Jewish boy riding his bike in his neighborhood was stabbed multiple times by 13-year-old and a 17-year-old Palestinians, the Jerusalem Post reports. The younger Palestinian teen was subdued by a car driven by a passerby, while the older, who also stabbed a nearby 24-year-old Jewish man, was killed by police. "Police continue to step up security and will continue to prevent or neutralize terrorists who carry out attacks," said Jerusalem police spokesman Micky Rosenfeld, who has tweeted updates about the incidents. Some violence is directed against police. On Monday, an attacker who allegedly pulled a knife on an officer near Lion's Gate in Jerusalem was shot and killed. To read the rest of the article, click here. … END_OF_DOCUMENT_TOKEN_TO_BE_REPLACED 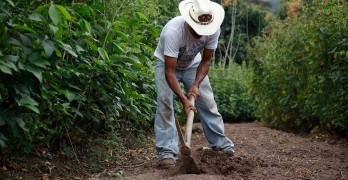 By Ann Lovell, Baptist Global Response EDITOR'S NOTE: On Global Hunger Sunday, Oct. 11, Southern Baptist congregations addressed the hunger crisis across North America and around the world by receiving special offerings. Donations received are channeled through Global Hunger Relief, which uses 100 percent of each gift to meet hunger needs. LAS MEDIAS DOS, Honduras (BP) - Lucio, a 23-year-old Chorti farmer, emerges from the hedgerows with a machete in hand. He has been tending his small plot of land in preparation for the next sowing season for corn. In the past, soil erosion complicated his efforts and made his farm less productive. "I tilled the soil with a hoe, &#91;and&#93; the soil would roll downhill whenever it rained," Lucio said. "Now there's been an improvement with the barriers … because the soil that rolls stops at the barriers. In the past, people didn't think about this … but it is a big help for the land." The "barriers" are hedgerows of nitrogen-fixing legumes, a key component of a farming technique called SALT or Sloping Agricultural Land Technology. Lucio learned the technique while studying at the Chorti Agricultural Development Center in Cabañas, Honduras, a nonprofit center that receives … END_OF_DOCUMENT_TOKEN_TO_BE_REPLACED

By David Jeremiah EL CAJON, Calif. (BP) - Something strange happens to the psyche of a nation in difficult times. The downtrodden begin to resent government and wealthy corporations and individuals, seeing them as out of touch with, if not the cause of, their plight. Desperation can lead to a reversal of … END_OF_DOCUMENT_TOKEN_TO_BE_REPLACED