By Gregory Tomlin, Christian Examiner NEW YORK (Christian Examiner) – Should gay rights come into conflict with religious belief, religious liberty will lose, President Barack Obama told an audience of lesbian, gay, bi-sexual and transgender activists at the Democrat National Committees annual LGBT Gala in New York Sept. 27. "We affirm that we cherish our religious freedom and are profoundly respectful of religious traditions," Obama said. "But we also have to say clearly that our religious freedom doesn't grant us the freedom to deny our fellow Americans their constitutional rights." Obama said government will be respectful and accommodate the "genuine concerns and interests of religious institutions," but that American should "reject politicians who are supporting new forms of discrimination as a way to scare up votes." To read the rest of the article, click here. … END_OF_DOCUMENT_TOKEN_TO_BE_REPLACED 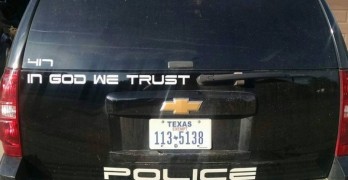 By Kelly Ledbetter, Christian Examiner CHILDRESS, Texas (Christian Examiner) – Childress Police Chief Adrian Garcia has a way with words: efficient and direct. So yesterday when he wrote a response to the Freedom from Religion Foundation letter he received about police vehicles bearing the words, "In God We Trust," Garcia needed to use only four words -- "Go fly a kite." "After carefully reading your letter I must deny your request in the removal of our Nations motto from our patrol units, and ask that you and the Freedom From Religion Foundation 'go fly a kite.'" This was his entire one-sentence response. To read the rest of the article, click here. … END_OF_DOCUMENT_TOKEN_TO_BE_REPLACED

By Tom Strode, Baptist Press WASHINGTON (BP) - Congressional testimony by Planned Parenthood's president failed to satisfy the concerns of lawmakers and pro-life advocates in the wake of undercover videos providing evidence the organization trades in baby body parts. Cecile Richards, head of Planned Parenthood Federation of America (PPFA), denounced charges -- apparently of unethical or illegal activity by her organization -- based on the videos as "offensive and categorically untrue" in a House of Representatives hearing Tuesday (Sept. 29). The hearing before the House Oversight and Government Reform Committee followed the release of 10 secretly recorded videos that show various Planned Parenthood officials discussing the sale of organs from aborted children. The videos recorded and released by the Center for Medical Progress (CMP) also display PPFA employees acknowledging their willingness to manipulate the abortion procedure to preserve body parts for sale and use. In addition, the videos include evidence of the dissection of live babies outside the womb to remove organs. Less than one percent of PPFA's centers facilitate federally approved fetal tissue donation, something many of their patients request, Richards … END_OF_DOCUMENT_TOKEN_TO_BE_REPLACED

By Gregory Tomlin, Christian Examiner WASHINGTON (Christian Examiner) – The Little Sisters of the Poor received an unexpected visitor Sept. 23 when Pope Francis made an unscheduled stop at their community in Washington, D.C. The move, according to Vatican officials, was a show of support for the nuns who are entangled in a lawsuit with the federal government over the contraception mandate in the Affordable Care Act, known to the public – sometimes derisively – as "Obamacare." In July, the U.S. 10th Circuit Court of Appeals ruled the Little Sisters – based in Denver, Colo. – must comply with procedures for opting out of the birth control mandate in Obamacare because the process did not impose a "substantial burden" on them. But the Little Sisters argued that the mandate does just that. Under the rules established for religious organizations, those which object to providing contraceptives must notify the federal government of their claim of conscience in writing. To read the rest of the article, click here. … END_OF_DOCUMENT_TOKEN_TO_BE_REPLACED

By Tom Strode, Baptist Press WASHINGTON (BP) - The U.S. House of Representatives voted Sept. 18 to defund Planned Parenthood in the wake of the release of undercover videos providing evidence the organization trades in baby body parts. On the same date, the House also approved legislation to protect babies who survive abortions. House members passed the bills in the face of President Obama’s promise to veto both measures. Representatives voted 241-187 for the Defund Planned Parenthood Act, H.R. 3134. The bill would place a one-year moratorium on federal money for the Planned Parenthood Federation of America (PPFA) and its affiliates while Congress investigates the organization. The vote came after the release since mid-July of 10 secretly recorded videos that show Planned Parenthood officials discussing the sale of organs from aborted children and acknowledging their willingness to manipulate the abortion procedure to preserve body parts for sale and use. The videos also provided evidence of cutting into live babies to remove organs. The House passed the Born-alive Abortion Survivors Protection Act, H.R. 3504, by 248-177. The proposal -- which builds on the 2002 Born-alive Infants Protection Act -- would require … END_OF_DOCUMENT_TOKEN_TO_BE_REPLACED 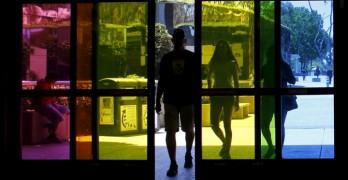 By Kelly Ledbetter, Christian Examiner OAKLAND, Calif. (Christian Examiner) – The University of California (UC) system, under pressure to address recent anti-Semitism demonstrations, has proposed a draft of a Statement of Principles Against Intolerance, which could potentially infringe on the free speech rights of students, faculty, and staff. "Intolerance has no place at the University of California," the statement declared. "Everyone in the University community has the right to study, teach, conduct research, and work free from acts and expressions of intolerance." Numerous critics have raised the concern that UC's statement, written by UC President Janet Napolitano and others, would unnecessarily limit free speech rights on campus. Napolitano served as the United States Secretary of Homeland Security from 2009-2013 for the Obama administration. To read more, click here. … END_OF_DOCUMENT_TOKEN_TO_BE_REPLACED 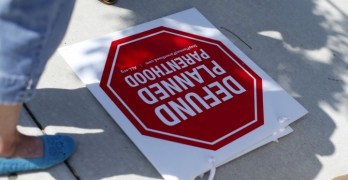 By Gregory Tomlin, Christian Examiner LITTLE ROCK, Ark. (Christian Examiner) – A little more than a month after Arkansas Gov. Asa Hutchison ordered his state to dissolve its Medicaid provider contract with the scandal-plagued abortion provider Planned Parenthood, a federal judge has ordered it reinstated – but perhaps only temporarily. On Sept. 18, U.S. District Judge Kristine Baker granted a request from Planned Parenthood of the Heartland and the Arkansas branch of the American Civil Liberties Union to block the defunding of the organization for 14 days, even after a series of 10 videos surfaced showing abortion providers negotiating the sale of fetal body parts with undercover operatives from the Center for Medical Progress. The cancellation of the Medicaid provider contract – a state contract – was to have taken effect Sept. 20. Now, both sides in the case will have two weeks to prepare further arguments as to why the funding should be permanently reinstated or denied. To read more, click here. … END_OF_DOCUMENT_TOKEN_TO_BE_REPLACED 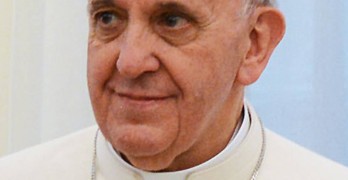 By Erin Roach, Baptist Press NASHVILLE (BP) - Pope Francis has extended to priests worldwide the authority to offer absolution for the sin of abortion during the Catholic Church's "Holy Year of Mercy," which begins Dec. 8 and runs through Nov. 20 of next year. Most priests in the United States already have such authority, but in other nations they must seek permission from bishops, a formal process that has led to frustration among those seeking absolution. Under Roman Catholic canon law, abortion brings automatic excommunication unless the person who has had an abortion or performed an abortion confesses and receives absolution. Southern Baptist women's ministry leaders Kathy Ferguson Litton, Dorothy Patterson and Rhonda Kelley, in comments to Baptist Press, however, lamented the misguided nature of the pope's decree that forgiveness must be sought from anyone but Christ. The New York Times noted that Pope John Paul II enabled priests to offer the same absolution during the last Holy Year, in 2000. "Yet it shows &#91;Pope Francis'&#93; broader push to make Catholicism more merciful and welcoming," The Times noted. Vatican officials said it's possible the pope will allow the abortion absolution practice to … END_OF_DOCUMENT_TOKEN_TO_BE_REPLACED 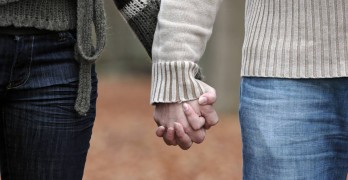 By Erin Roach, Baptist Press NASHVILLE (BP) - Amid news of men, women and families being thrust into the shadow of the Ashley Madison adultery website hacking, Baptist Press asked the wives of a few longtime Southern Baptist leaders how Christian wives can feel safe in their marriages. Carol Ann Draper, Jodi Chapman and Janet Vines expressed gratitude for their husbands and discussed how the Lord has strengthened their marriages through challenges along the way. Tony Rose, a Kentucky pastor with years of pastoral care experience, also offered some reasons why wives of godly men can feel secure despite today's adultery-ridden culture. "The thing that makes me feel secure is first of all just knowing God and knowing that God put us together," said Draper, whose husband Jimmy Draper was president of the Southern Baptist Convention from 1983-84 and, later, president of LifeWay Christian Resources. "We were 18 and 20 when we married, and so we literally were growing up together and we had no one else to depend on except each other." Draper realizes, though, that in many homes the trust has been broken, and in every home Satan wants to plant seeds of doubt. She can recall times when news of divorce or something in the … END_OF_DOCUMENT_TOKEN_TO_BE_REPLACED 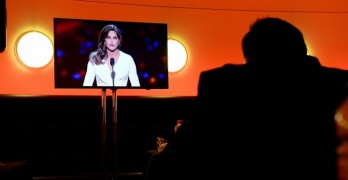 By Kelly Ledbetter, Christian Examiner BURBANK, Calif. (Christian Examiner) – The former Olympian and reality television star Bruce Jenner, who has asked the media to address him as "Caitlyn," may be seeking to demonstrate a social distance between himself and the LGBT community that previously accepted Jenner as a figurehead. In an interview with Ellen DeGeneres, Jenner said, "I'm a traditionalist." He said he was "okay" with gay marriage, but he was not resoundingly supportive, USA Today reported. Jenner has said he is a republican and a Christian, but he ascribed his views to his age: "I'm older than most people in the audience. I kind of like tradition, and it's always been a man and a woman. I'm thinking, 'I don't quite get it.'" To read more, go to the Christian Examiner website. … END_OF_DOCUMENT_TOKEN_TO_BE_REPLACED

By Rebecca Holloway PINEVILLE, La. – For years, I have read and heard the statement, “We need to hold life/our family/our possessions with an open hand.” The idea is that we are not in control of our lives or anything else on this planet. God is in complete control of all things and has the power and right to … END_OF_DOCUMENT_TOKEN_TO_BE_REPLACED