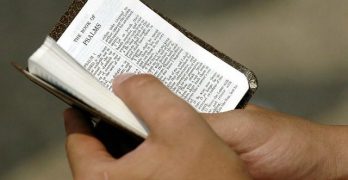 This article is used by permission from Breitbardt. By Virginia Hale Bundestag member Erika Steinbach and Iranian-born pastor Mahin Mousapour called for much stronger sanctions for Muslims who abuse Christians in Germany at a press conference on Monday. Highlighting the fact Christians suffer violence, harassment, and death threats in migrant lodgings, Ms. Mousapour criticised Germany for granting Islam “too much respect”.  Declaring anti-Christian hate attacks an affront to German values, politician Erika Steinbach advocated the government deport migrants who insult or attack Christians. At the press conference Ms. Mousapour, who converted to Christianity more than 25 years ago, reported that Christians face various forms of persecution in migrant housing.

By Tim Patrick DERIDDER, La. – Many of you know we lost our oldest son in October. David was an IMB (Southern Baptist) missionary. His death gives me an inside view that many of you do not possess. This year, that view carries greater weight than ever. I share this view with you so that (hopefully) you will … END_OF_DOCUMENT_TOKEN_TO_BE_REPLACED