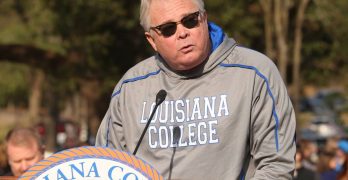 By Rick Brewer Since the 1973 Roe v Wade Supreme Court decision, millions of Americans have prayed to God and petitioned our government for an end to abortion. Could it be that our efforts are having an effect? Vice President Pence thinks so.  When addressing the recent inclusive March for Life in Washington D.C., he said: “Life is winning again in America.” That is true.  No longer is a baby aborted every 20 seconds.  In fact, the abortion rate is at an all-time low. While we take joy in the downturn of the abortion rate, we are no less grieved and burdened about the murder of America’s unborn innocent citizens. How ironic it is that some who so desperately want to embrace the world’s political and socio-economic refugees would also staunchly and vehemently oppose the Constitutional right-to-life of the most helpless persons already in the United States: babies still in the womb. In this regard, Louisiana College is extremely grateful for a jurist of the calibre of Judge Gorsuch.  His nomination to the Supreme Court, I believe, is a bellwether of real hope and change for our nation, especially considering his opinions on Hobby Lobby and Little Sisters of the Poor.  Let’s pray for Judge Gorsuch in the coming … END_OF_DOCUMENT_TOKEN_TO_BE_REPLACED 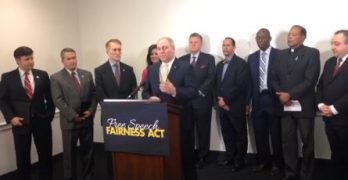 By Message Staff WASHINGTON, D.C. - Rep. Mike Johnson (R-LA) has co-introduced legislation that could repeal an amendment that has restricted free speech of churches and non-profit agencies from speaking openly about moral, political and social issues with fear of losing tax-exempt status. During a ceremony on Wednesday, Feb. 2, Johnson appeared with other legislators and pastors for introduction of H.R. 781, also known as the Free Speech and Fairness Act. If passed, the legislation would repeal the Johnson Amendment, which was named after Lyndon Johnson, a Texas senator when the bill was issued in 1954. He eventually became president of the U.S. President Donald Trump has also voiced support for repealing the Johnson Amendment. During the National Prayer Breakfast on Thursday, Feb. 2, Trump promised to "totally destroy" the amendment. "Two of our most sacred and unalienable rights protected by the Constitution are the right to religious freedom and the right to speak freely without fear of prosecution," said Rep. Johnson, a member of First Baptist Church Bossier City, in a news release. "The Johnson Amendment infringes upon both of these by subjecting churches and non-profits to IRS investigation and censorship … END_OF_DOCUMENT_TOKEN_TO_BE_REPLACED

By Lane Corley MADISONVILLE, La. - In Luke 15, Jesus gives us a glimpse of the Father’s heart for the lost. 1. Those far from God liked Jesus and he liked them (verse 1). Is that true of me? When was the last time someone far from God approached me? Am I available to them? Building relationships with … END_OF_DOCUMENT_TOKEN_TO_BE_REPLACED