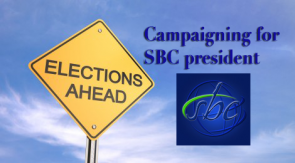 ST. LOUIS (Christian Examiner) – Some would say there hasn’t been a full out campaign for president of the Southern Baptist Convention since 1989 in Las Vegas, but one pastor says it’s time to throw in the wild card, admit it’s a political process, and allow the nominees to press forward.

Passions ran high in 1989 during what is commonly referred to as the Conservative Resurgence in the Southern Baptist Convention. Conservatives had elected Jerry Vines in 1988 in San Antonio and were set to elect him for a second straight year.

Moderates couldn’t win against Vines in 1998 even with Texan native Richard Jackson, the mega pastor who led North Phoenix Baptist Church in explosive growth; and so in 1989 moderate supporters launched an unprecedented campaign for Daniel Vestal, who later became the executive coordinator of the Cooperative Baptist Fellowship.

By Joe McKeever Freely you have received; freely give. (Matthew 10:8) JACKSON, Miss. (BP) -- Dr. Watson was complimenting Sherlock Holmes on a brilliant observation no one else had noticed. "Of course," Holmes remarked. "It's what I do." Forgiveness and grace -- that's what we believers do. Here is … END_OF_DOCUMENT_TOKEN_TO_BE_REPLACED