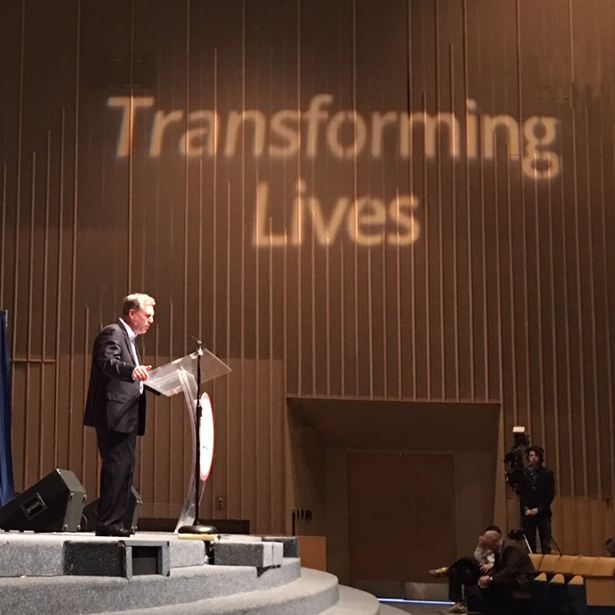 David Brooks, pastor of Calvary Baptist Church in Alexandria, spoke during a recent Louisiana College Chapel service of God's protection over his daughter after she experienced cardiac arrest.

Brooks recounted a personal story of God’s divine protection and mercy in his family’s life. In April of 2015, Brooks’ daughter, 31 year-old Payton McCalmont, a mother of two small children, went into cardiac arrest while delivering a lecture to third-year medical students at LSU Medical Center.

She was immediately admitted to the ICU at the hospital. After two long comatose days, she awoke with almost no memory of the incident. Brooks related that his daughter’s memory did returned. Recovered, she is doing well by the grace of God, he said.

Despite the devastation that befell his daughter, Brooks indicated the value of his daughter having been at “the right place, at the right time, with the right people.” The right place to experience a cardiac arrest is in a room full of medical students at a hospital. Brooks said his daughter received instant medical care, which improved her chances of survival.

Brooks related how his daughter’s ailment happened at the right time. McCalmont, a physical therapist, often lectured after lunch. But the lecture time was moved to the end of the day when McCalmont suffered the trauma. If not for the schedule change, McCalmont may have had the episode while driving her car, or in front of her two children. The latter options would both have likely resulted in death and tremendous distress.

Brooks’ final point defined how his daughter was with the right people: a room full of medical students, skilled, readily available, and equipped to handle the emergency.

The account exemplifies God’s intentionality in placing his people in the right place, at the right time, with the right people, Brooks said. Similarly, God has brought the LC family — faculty, students, and administration alike — to Louisiana College for a purpose. It is the right place to learn, grow, and use their talents for the glory of Christ.

Referring to Esther 4:14, Brooks illustrated that, like Esther, God has raised up LC President Rick Brewer, the faculty, administration, and students to be at LC “for such a time as this. God, in His divine providence, has arranged for us to be here at this time.”

For some students it might be a starting point for their lifelong walk with Christ, being equipped with the community and tools to flourish, he said. For others, it could be a place to grow and develop a closer relationship with Christ.

“I believe if you are a member of this family, you are in the right place, with the right people, at the right time,” Brooks concluded. “God will lead you to be who he wants you to be tomorrow.”

By Lane Corley Olive trees produce one of the most desired and sought after fruits around the world. The trees can live for thousands of years. The olive and the olive tree is spoke of in the Bible on numerous occasions. Including a few references to family life, like in Psalms 128:3 – “Your children will be … END_OF_DOCUMENT_TOKEN_TO_BE_REPLACED