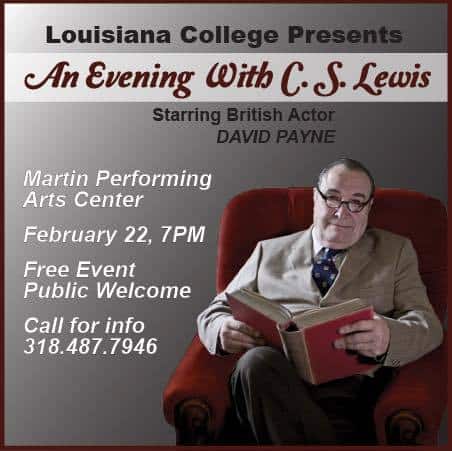 PINEVILLE – The atheist-turned-Christian, Clive Staples (CS) Lewis (1898–1963), is regarded by evangelicals as one of the intellectual giants of the twentieth century, and arguably one of the most influential writers of his day.

His 30-plus books continue to attract thousands of new readers every year. Many consider his magnum opus to be “Mere Christianity.”

“The Chronicles of Narnia” have sold more than 100 million copies and been transformed into three major motion pictures.

Louisiana College will feature CS Lewis personified by British actor David Payne, who has portrayed Lewis in the play, Shadowlands.

Payne is touring the US and will present “An Evening with CS Lewis” at LC’s Martin Performing Arts Center, February 22 at 7 p.m.

Thousands have attended his 500-plus performances, which have won Payne numerous accolades.

“Of the many conferences and events we have brought to CenLa in the last few years, this portends to be one of the most significant,” said LC President Rick Brewer.

Brewer established the CS Lewis Honors Scholars program at LC because “Lewis was such an advocate for clear-thinking and writing about Christianity and living to emulate its figurehead Jesus Christ.”

“Inasmuch as David Payne acts like Lewis in his presentation, our desire is that our students will embrace the thought life of Lewis and impact the future as much as Lewis impacted the past and impacts the present.”

LC leaders urge local media to attend this important event and expose more of central Louisiana to the heart and mind of CS Lewis.

By Steve Horn ALEXANDRIA, La. (LBC) - This year has brought about more challenges and cancellations than any of us care to recount. For those meetings and events that were scheduled, more times than not, they happened virtually rather than in person. This has been true for us as Louisiana … END_OF_DOCUMENT_TOKEN_TO_BE_REPLACED