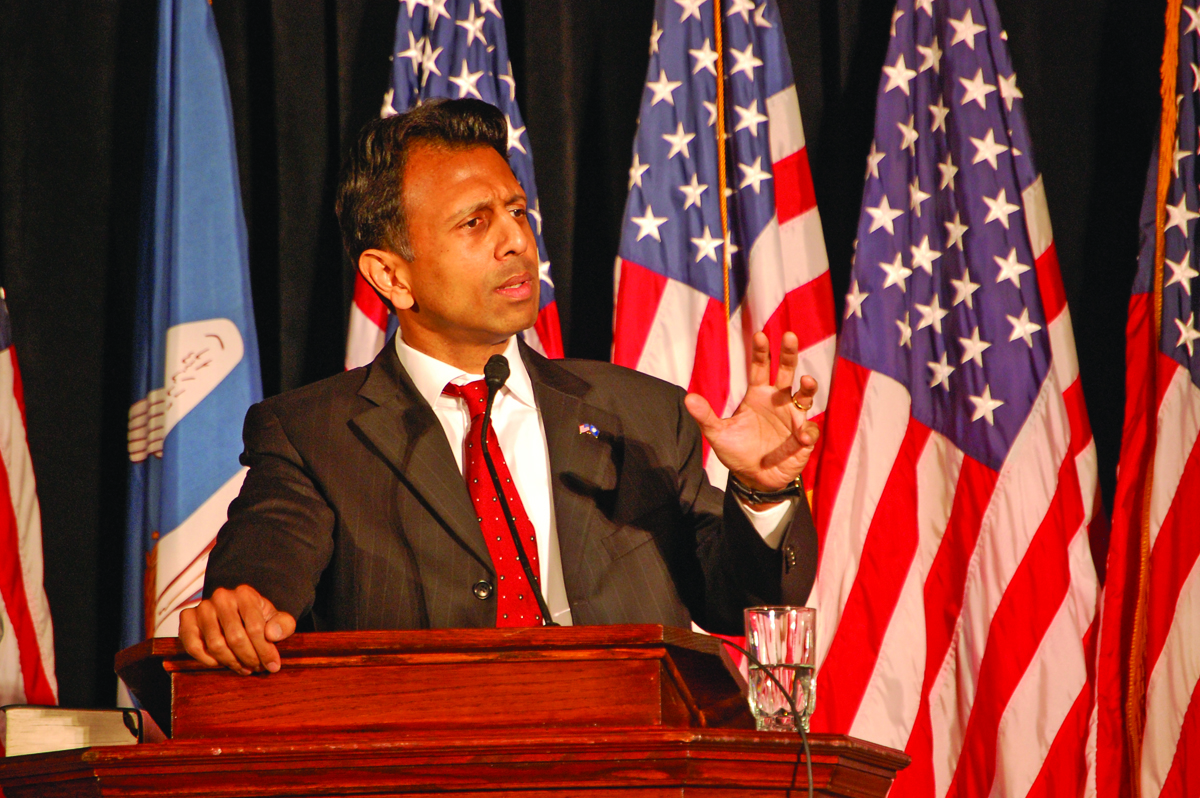 “My dad and mom came to Louisiana because they believed in America. And when they got here they found that the legend was true,” said Jindal as he officially launched his campaign June 24 for the GOP presidential nomination. “They found that the people of Louisiana accepted them. And they found that America is indeed the land of the free and home of the brave.

“He told me as a young kid that Americans can do anything,” said Jindal. “I believed him then, and I believe it now.”

Before a crowd of a 1,000 supporters at the Pontchartrain Center in Kenner, the 44-year-old Jindal told the crowd he was “running for President without permission from headquarters in Washington, D.C.”

He enters a crowded field as there are 15 others who got in ahead of him with speculation that several others candidates may be joining the race as well.

Jindal, who is completing his second term as governor, is no stranger to politics and has quite the résumé as well as a string of accomplishments that would rival most elder statesmen. A Rhodes Scholar, he was named to run the state Department of Health and Hospitals at the age of 25 and was the youngest governor in America when he took office in 2008.

In 2001, President George W. Bush appointed him assistant Secretary for the U.S. Department of Health and Human Services where he served as a healthcare policy expert in the administration.

Jindal would resign in 2003 to make an unsuccessful run for governor in Louisiana. After narrowly being defeated by Kathleen Blanco, he was elected to Congress in 2004 where he was chosen as GOP freshman class president. He was reelected to Congress again in 2006 before being elected Louisiana’s Governor in November of 2007.

“The United States of America was made great by people who get things done. Not lots of talk or entertaining speeches. To be sure, there are a lot of great talkers running for President already. But none of them, not one, can match our record of actually shrinking the size of government,” said Jindal. “If great speeches helped our country, we would be on easy street right now.

“It’s easy to talk about the mess that Obama has made of our country. Every American knows about it, and every Republican candidate talks about it,” he said. “That’s not even half of what we should expect of the next President. We owe voters more than just a tirade about the problem – we owe them honesty about our solution.

Jindal, who is well known for professing his faith, told the crowd, “I know that some believe I talk too much about my faith. But I will not be silenced in order to meet their expectations of political correctness.

“They don’t accept the idea that you can be both intellectual and Christian. They can’t fathom the notion you can be both smart and conservative,” said Jindal. “But, they need to get out more. There’s a big country out here with millions of Americans who believe in God and are not ashamed to say so.

“I would be wary of a president who didn’t seek wisdom from the Almighty. I don’t know about you, but I’ve met many very smart people who lack wisdom. Yet Christianity is under assault today in America,” said Jindal. “But the liberals have forgotten their history. Religious liberty is not some quaint notion from the past. It is fundamental to our freedom. That’s why it is protected in the First Amendment to the Constitution. I’m going to say this slowly so that even Hillary Clinton can understand it. America did not create religious liberty, religious liberty created the United States of America.”

A defiant Jindal didn’t mince words to supporters as he laid out what he wanted to see acomplished if he’s elected President.

Here are his four objectives:

Replace Obamacare with a health care system that focuses on reducing costs and restoring freedom;

Grow the private sector economy by shrinking the size, scope, and reach of the federal government;

And rebuild America’s defenses and restore its standing on the world stage.

“I served two terms in Congress so I can tell you how it works in Washington — If you want to be with the cool kids, be liked by the media, and be invited to cocktail parties, you have to accept that there are things in Washington you just cannot do,” Jindal told the crowd.

“They say the $18 trillion national debt can’t really be addressed, and it’s just part of doing business, so it’s better not to talk about it. But we can and we will.

“They know Social Security and Medicare are going bankrupt, but they are afraid to do anything about it, so they deny the math and pretend everything is fine. But we can reform and save these programs and we will.

“In Washington they say term limits is a quaint idea that we are naive to believe in. They think we need a permanent class of elites. It’s safer to not rock the boat. But we can rock the boat, and we will.

“In Washington they know that the voters want the border secured, but they refuse to do it. But you and I can, and we will.

“Finally…. They say we can’t really repeal and replace all of Obamacare. But I am the only candidate who has written a replacement plan, a free market plan that focuses on reducing costs. We can repeal Obamacare and we will,” Jindal said.

By Tim Patrick DERIDDER, La. – Many of you know we lost our oldest son in October. David was an IMB (Southern Baptist) missionary. His death gives me an inside view that many of you do not possess. This year, that view carries greater weight than ever. I share this view with you so that (hopefully) you will … END_OF_DOCUMENT_TOKEN_TO_BE_REPLACED