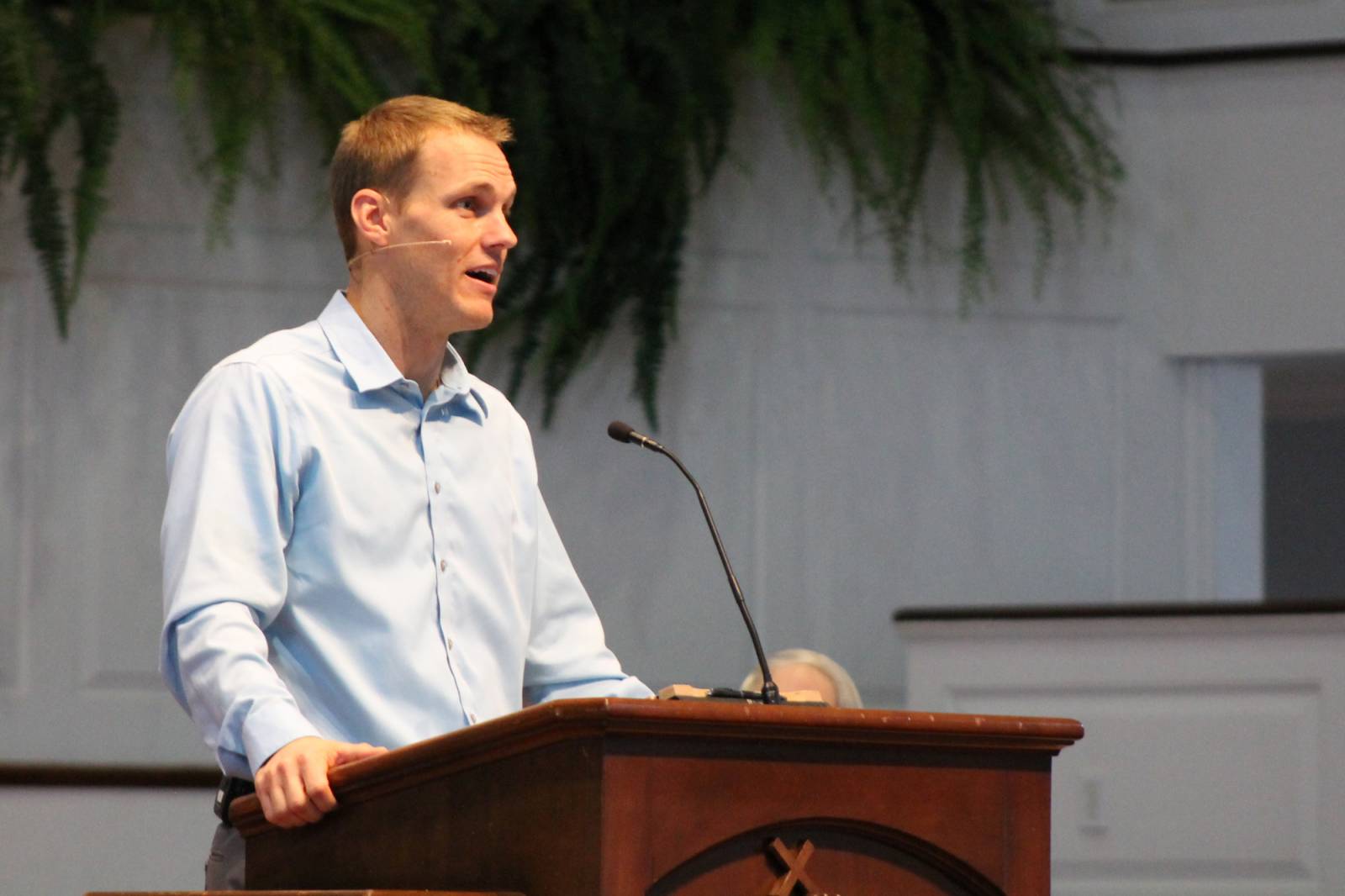 NEW ORLEANS (BP) – Giving one’s life as a “blank check” to God may seem like extraordinary devotion, IMB President David Platt said, but a commitment to go wherever God leads is the “elementary essence of what it means to follow Christ.”

Before Platt spoke, NOBTS students, faculty and staff gave more than $10,000 in special offerings collected in light of recent IMB financial/personnel cutbacks. During the seminary’s missions’ emphasis, IMB personnel spoke in chapel, classes and breakout sessions and met with students over coffee or lunch.

Underscoring his meaning of a “blank check,” Platt cited flooding in Yemen, fighting in Iraq and persecution of Christians in Pakistan from the day’s headlines.

“To be clear,” he said, “when you say ‘wherever’ to God, you’re saying I’ll go and take my family to Yemen, Iraq, and Pakistan. I’ll go into the heart of ISIS. I’ll go into Boko Haram territory of West Africa. I’ll go wherever You want me to go.'”

Platt said calling believers to give God a “blank check” is not a responsibility he takes lightly.

“My perspective on these things totally changed a year ago when I stepped into this role and I realized that whenever I see news headlines like these on a daily basis, people I’m responsible for are living in or near most all these places,” Platt said.

Platt described the moment years ago as an NOBTS student when the weight of his theological studies and a world without Christ came together in a “massive collision” that shook him to the core.

“Casual, nominal, cultural Christianity makes no sense if this Word is true and this is the world I live in,” he said.

Recognizing that a blank check commitment can be frightening, Platt urged the chapel audience to understand who the “Me” is in Jesus’ “follow Me” commandment. Drawing the initial chapters of Matthew’s Gospel, Platt said Jesus is Savior; Messiah; Son of David; Son of Abraham; the center of all history; fully human; fully divine; light of the World; and a dozen other descriptors of His divinity.

“When you realize who He is, you realize the utter foolishness of putting any conditions on obedience to this King…. Followers of Jesus don’t always know where they’re going, but they always know who they’re with,” Platt said.

Gordon Fort, IMB vice president for prayer mobilization and training, urged listeners in chapel Nov. 8 to “pray like it matters.”

Fort told of his ache for America and his observation that the church has become people of God without the power and the presence of God.

Fort showed a photograph of a baptism in a frozen lake in western Siberia and told of the pastor who left home with his family to share the Gospel in the barren land. Fort said he once shared the photograph at a speaking engagement and a woman came up to him, crying. The woman, a retired state WMU executive, told Fort she had once prayer-walked in western Siberia and had developed a deep burden for the region.

“She said she’d been praying for 15 years that God would send someone to take the Gospel into that area and then said, ‘Until you shared your report, I had no idea how God had answered that prayer,'” Fort said, relating the woman’s story.

“Friends, when you make a petition, an entreaty of God, when you care about the soul of a lost person to the extent that you will pray for 15 years without an answer, then you are praying like it matters.”

Prayer unleashes the power of the Gospel to break the shackles of sin so the Gospel can be effective, Fort said. “So, if you’re going to pray, pray like it matters.”

‘Jesus for the hard places’

Another speaker, Nik Ripken, author of two books on the persecuted church, “The Insanity of God” and “The Insanity of Obedience,” recounted that personal sorrow while serving in Somalia put him on a journey to find out if “Jesus was for the hard places” of life.

Ripken said he decided that the way to find out was to go to Christians suffering persecution.

After hundreds of interviews, Ripken said he learned what those who are persecuted know: Jesus; the power of prayer and fasting; Scripture; songs of faith committed to memory; that others are praying for them; that they are suffering for Jesus; and that persecution is normal.

“What they taught me is that persecution is like the sun coming up in the east; it’s normal,” Ripken said. Interviewing persecuted Christians, he said, was like “walking with Simon Peter or Lydia.”

By Lane Corley Olive trees produce one of the most desired and sought after fruits around the world. The trees can live for thousands of years. The olive and the olive tree is spoke of in the Bible on numerous occasions. Including a few references to family life, like in Psalms 128:3 – “Your children will be … END_OF_DOCUMENT_TOKEN_TO_BE_REPLACED