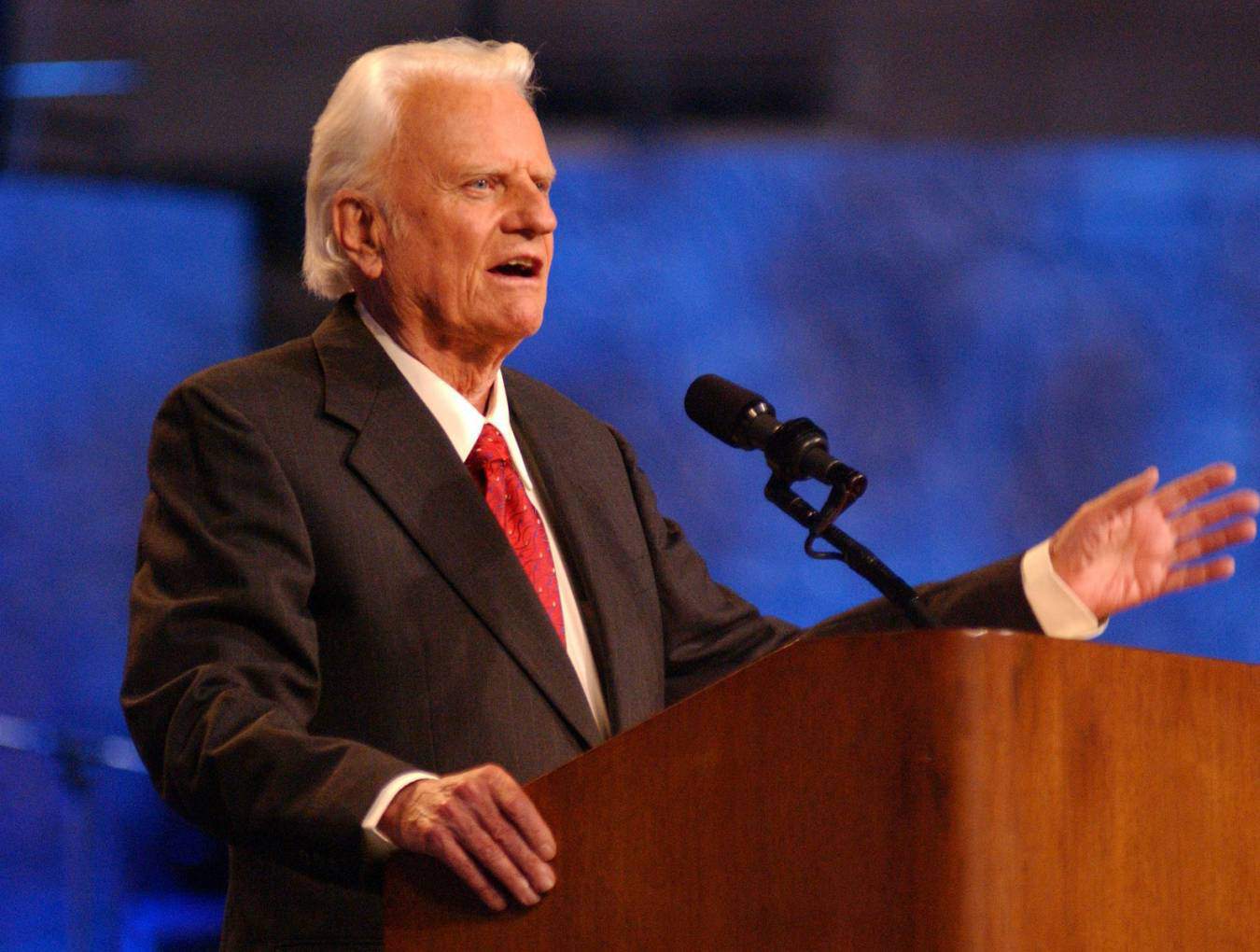 Throughout his life, Billy Graham preached the gospel of Jesus Christ to some 215 million people who attended one of his more than 400 Crusades, simulcasts and evangelistic rallies in more than 185 countries and territories. He reached millions more through TV, video, film, the internet and 34 books.

Born Nov. 7, 1918, four days before the armistice ended World War I, William Franklin “Billy” Graham Jr. grew up during the Depression and developed a work ethic that would carry him through decades of ministry on six continents.

“I have one message: that Jesus Christ came, he died on a cross, he rose again, and he asked us to repent of our sins and receive him by faith as Lord and Savior, and if we do, we have forgiveness of all of our sins,” said Graham at his final Crusade in June 2005 at Flushing Meadows Corona Park in New York.

While Graham’s primary focus was to take this message to the world, he also provided spiritual counsel to presidents, championed desegregation, and was a voice of hope and guidance in times of trial. In 2001, he comforted his country and the world when he spoke at the National Cathedral in Washington, following the Sept. 11 terrorist attacks. At three global conferences held in Amsterdam (1983, 1986, 2000), Graham gathered some 23,000 evangelists from 208 countries and territories to train them to carry the message of Jesus Christ around the world.

During the week of his 95th birthday in 2013, Graham delivered his final message via more than 480 television stations across the U.S. and Canada. More than 26,000 churches participated in this My Hope project, making it the Billy Graham Evangelistic Association’s largest evangelistic outreach ever in North America.

Graham, a country boy turned world evangelist, who prayed with every U.S. president from Harry S. Truman to Barack Obama, was raised on a dairy farm in Charlotte. Back then, “Billy Frank,” as he was called, preferred baseball to religion. “I detested going to church,” he said when recalling his youth.

But in 1934, that changed. At a revival led by traveling evangelist Mordecai Fowler Ham, 15-year-old Graham committed his life to serving Jesus Christ. No one was more surprised than Graham himself.

“I was opposed to evangelism,” he said. “But finally, I was persuaded by a friend [to go to a meeting]…and the spirit of God began to speak to me as I went back night after night. One night, when the invitation was given to accept Jesus, I just said, ‘Lord, I’m going.’ I knew I was headed in a new direction.”

Several years later, Graham’s “new direction” led him to the Florida Bible Institute (now Trinity College of Florida), and later, Wheaton College in suburban Chicago, where he met fellow student Ruth McCue Bell, the daughter of medical missionaries in China. The couple graduated and married in the summer of 1943. Mr. and Mrs. Graham and their five children made their home in the mountains of North Carolina. They were married for 64 years before Ruth’s death in 2007.

After two years of traveling as a speaker for the Youth for Christ organization, Billy Graham held his first official evangelistic Crusade in 1947; but it was his 1949 Los Angeles Crusade that captured the nation’s attention. Originally scheduled to run for three weeks, the “tent meetings” were extended for a total of eight weeks as hundreds of thousands of men, women and children gathered to hear Graham’s messages.

On the heels of this campaign, Graham started the Billy Graham Evangelistic Association, which was incorporated in 1950. Since 2000, Graham’s son, Franklin, has led the Charlotte-based organization, which employs some 500 people worldwide. 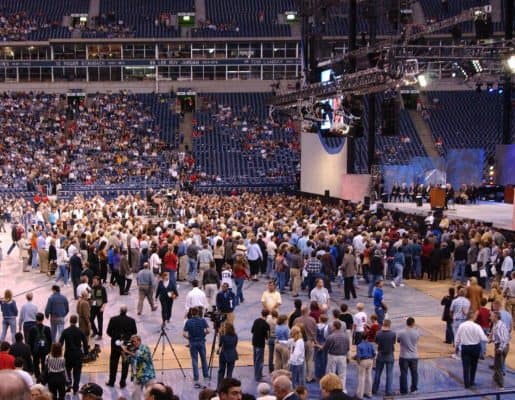 Seekers begin to fill the floor of Texas Stadium after an invitation by Billy Graham to turn to Jesus as their Lord and Savior during the Metroplex Mission. Baptist Press file photo

Billy Graham may be best known, however, for his evangelistic missions or “Crusades.” He believed God knew no borders or nationalities. Throughout his career, Graham preached to millions in locations from Addis Ababa, Ethiopia to Zagorsk, Russia; and from Wellington, New Zealand to the National Cathedral in Washington. In 1973, Graham addressed more than one million people crowded into Yoido Plaza in Seoul, South Korea—the largest live audience of his Crusades.

Preaching in Johannesburg in 1973, Graham said, “Christ belongs to all people. He belongs to the whole world.…I reject any creed based on hate…Christianity is not a white man’s religion, and don’t let anybody ever tell you that it’s white or black.”

Graham spoke to people of all ethnicities, creeds and backgrounds. Early in his career, he denounced racism when desegregation was not popular. Before the U.S. Supreme Court banned discrimination on a racial basis, Graham held desegregated Crusades, even in the Deep South. He declined invitations to speak in South Africa for 20 years, choosing instead to wait until the meetings could be integrated. Integration occurred in 1973, and only then did Graham make the trip to South Africa.

A 1977 trip to communist-led Hungary opened doors for Graham to conduct preaching missions in virtually every country of the former Eastern Bloc (including the Soviet Union), as well as China and North Korea.

Graham authored 34 books, including his memoir, Just As I Am (Harper Collins, 1997), which remained on The New York Times best-seller list for 18 weeks.

In 1996, Graham and his wife, Ruth, received the Congressional Gold Medal, the highest award Congress can bestow on a private citizen. He was also listed by Gallup as one of the “Ten Most Admired Men” 61 times—including 55 consecutive years (except 1976, when the question was not asked). Graham was cited by the George Washington Carver Memorial Institute for his contributions to race relations and by the Anti-Defamation League of the B’nai B’rith. 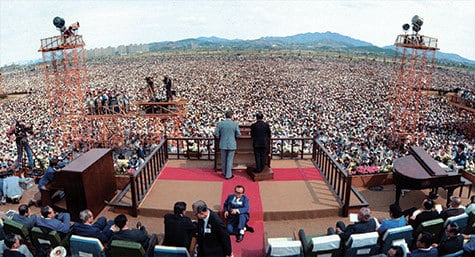 Throughout his life, Graham was faithful to his calling, which will be captured in the inscription to be placed on his grave marker: Preacher of the Gospel of the Lord Jesus Christ.

“There were a few times when I thought I was dying, and I saw my whole life come before me…” said Graham at his Cincinnati Crusade on June 24, 2002. “I didn’t say to the Lord, ‘I’m a preacher, and I’ve preached to many people.’ I said, ‘Oh Lord, I’m a sinner, and I still need Your forgiveness. I still need the cross.’ And I asked the Lord to give me peace in my heart, and He did—a wonderful peace that hasn’t left me.”

About the Billy Graham Evangelistic Association