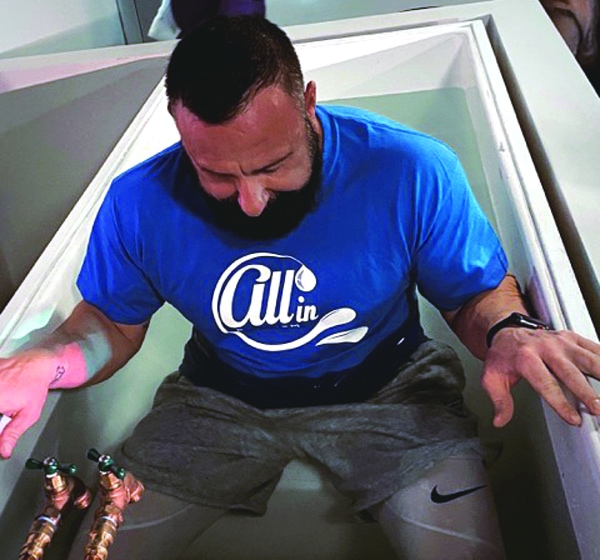 TERRYTOWN (LBM) – A sense of anxiety overcame Pastor Dennis Watson as he stepped into the Jefferson Parish Correctional Center on June 19, 2019, to offer words of forgiveness to Todd Williams, who three days earlier had driven his vehicle into an embankment of the Westbank Expressway and subsequently caused the death of Claude Williams, a beloved pastor of the Celebration Church Westbank campus.

The two Williamses are not related.

Miraculously, Todd Williams received forgiveness during the meeting with Watson, lead pastor of Celebration Church with 10 campuses in the New Orleans area and the Northshore, on behalf of the congregation and Claude Williams’s wife, Twila; and, he also gave his life to Christ.

“He wept as I prayed for him and then told me that he needed God in his life,” Watson told the Baptist Message. “That’s when I led him to pray for salvation.

“In the months that followed, I kept up with what was happening with Todd Williams in prison, and visited with him again,” he continued. “He shared with me that he feels as though his life has really changed, and now he’s telling others in prison about how the Lord can forgive people and free them from their struggles and strongholds. And while he will be in prison for some time, when he gets out of prison he wants to go to schools and tell teens to stay away from drugs and alcohol and to put their trust in the Lord.

“The Lord can redeem anyone and anything in our life with the power and forgiveness,” he said. “There is hope for everyone no matter what mistakes we make. For our congregation, for his [Todd Williams’s] wife and children, and for Pastor Williams’ family, it was a demonstration that God can bring good out of the worst of circumstances.”

The conversion of Todd Williams – who is serving a 21-year sentence for driving his Chevrolet Impala into Claude Williams and two others as they were helping two teenage girls change a flat tire June 16 – is just one example of how God has brought hope out of tragedy.

Two days after the accident, Twila Williams shared on WDSU-TV in New Orleans that she had forgiven the man who was responsible for her husband’s death. She also had encouraged her sons to do the same.

“The Bible tells us to forgive,” she said during the interview on WDSU. “I’m not happy with what happened, I don’t care for the individual that did this, but I have to forgive that person. The acronym JOY, Jesus, Others and Yourself. That’s how my husband truly lived his life.”

During two memorial services held June 21 and 22, one in Claude Williams’s hometown of Natchitoches and the other on the Metarie campus of Celebration Church, 70 individuals accepted Christ, including the teen girls whom Claude Williams and two other men had stopped to help.

On June 23, members and guests gathered inside a packed worship center on Celebration Church’s Westbank campus for the first worship service after Claude Williams’ death.

In his message, Watson told members that their attendance showed their trust in God and love for Pastor Claude Williams and his family. During the service, 15 people turned to Christ.

David Ford, the campus pastor since early December, told the Baptist Message that he and his wife, Daniela, are humbled to honor Claude and Twila Williams’s legacy.

“Our prayer is the same as theirs, to see God’s love reign and rule on the Westbank,” said Ford, who served as the campus student pastor at Celebration Church’s Westbank campus in 2015.

“For every single person that has a hurt, habit or hang up to know they can be healed. My hope is that everyone would grow in relationship with God and others resulting in changed lives, homes, communities, cities and world. Because we believe everyone needs Jesus. We hold on to the promise in Isaiah 43:19, ‘Behold, I am doing a new thing; now it springs forth, do you not perceive it? I will make a way in the wilderness and rivers in the desert.’”

In the final service of 2019, the congregation had their second largest non-Easter Sunday worship service attendance (434) and baptized four new believers.

Ford baptized nine new Christians in December, bringing to 22 the number of people to stir the baptistery waters since Claude Williams’ death.

Watson, who had a deep friendship with Claude Williams and continues to check on Twila Williams and her sons weekly, said that great days lie ahead for Celebration Church’s Westbank congregation.

“The congregation was devastated but they have demonstrated great resiliency,” he said. “While they have grieved, they have remained faithful. The campus has spent prayer and sought Lord throughout the last few months. God has positioned that congregation to make an impact on the Westbank for many years to come.”

By Rebecca Holloway PINEVILLE, La. – For years, I have read and heard the statement, “We need to hold life/our family/our possessions with an open hand.” The idea is that we are not in control of our lives or anything else on this planet. God is in complete control of all things and has the power and right to … END_OF_DOCUMENT_TOKEN_TO_BE_REPLACED