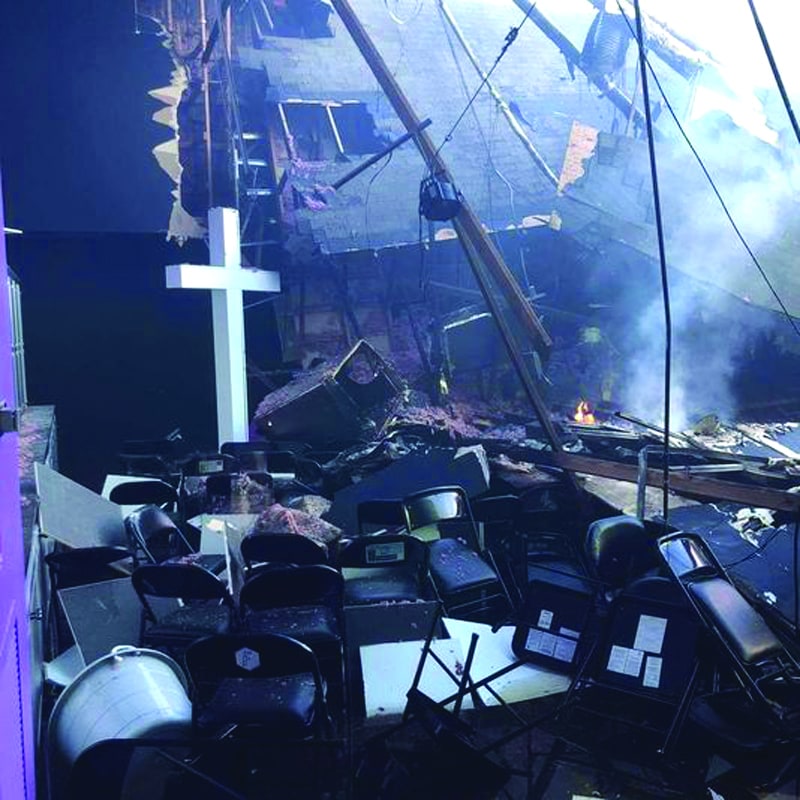 In this photo from the Bossier City Fire Department in the aftermath of the fire at First Bossier, Dec. 11, this cross remains upright and unscathed by the fire which destroyed numerous buildings, including the Faith Chapel on First Bossier's campus.

BOSSIER CITY – Fire investigators have determined Monday’s devastating fire on the campus of First Baptist Church in Bossier City was caused by an uninterruptible power supply battery back-up for a computer.

According to a news release from the Bossier City fire department, based on fire patterns at the scene, the Dec. 10 fire began in an office space near Faith Chapel – the original worship center – before rapidly spreading to the attic and other buildings on the property.

The determination was made following an extensive examination of the scene by investigators with the Bossier City Fire Department, the Louisiana Office of State Fire Marshal and the U.S. Bureau of Alcohol, Tobacco, Firearms and Explosives.

Members and staff of First Bossier gathered Wednesday, Dec. 12, inside the Bossier Civic Center to pray, worship and prepare for recovery. They were joined by a number of community leaders, including Bossier City Mayor Lo Walker and Bossier City Fire Chief Brad Zagone.

“What a powerful evening last night for our church as we gathered at the Bossier City Civic Center,” said Pastor Brad Jurkovich in a Dec. 13 statement to his congregation that was also shared with the Baptist Message.

“Chief Zagone being with us last night was very helpful as he was able to unpack the scope and severity of the damage while also giving us the chance to say a huge thank you to all our firefighters and first responders,” said Jurkovich. “They gave their all so that at least some of our campus facilities might be spared.

“Considering all the firefighters faced Monday and Tuesday was a tremendous reminder of God’s grace,” continued Jurkovich. “No lives lost. Amazing. Buildings can be rebuilt. Lives are eternal.”

Members of First Bossier also will have the opportunity this Sunday (Dec. 16) to express gratitude to Shreveport-Bossier firefighters, police and first responders, according to Jurkovich.

Services will be held in the main worship center, which was not damaged in the blaze.

“First Bossier’s small group ministry will need to be very flexible in the coming months and year as we take steps to rebuild,” Jurkovich told the Baptist Message after the meeting. “We are evaluating several off-campus venues near the main campus that can host our small groups.

“Our prayer is that by January 6 we will have a much clearer picture of how our Connect Groups will flourish and operate, along with facilities and details for our FB Kids and Student Ministries,” Jurkovich continued. “We are in this together. God is already providing and going before us in so many ways.

The fire was reported around 5:30 a.m. Dec. 11 and 30 fire department units from Bossier City and Shreveport responded in minutes, working tirelessly throughout the morning to contain the flames, which flared up several times during the morning. The Bossier City Fire Department alone had more than 65 firefighters and support personnel who worked to extinguish the extensive fire. BCFD administrative staff were activated to man units for service in other areas of the city.

The three-alarm blaze finally was brought under control at 3:15 p.m.

Jurkovich said he is working with his staff to help families and employees of the daycare facility which was heavily damaged in the fire and he asked members to look at the “new normal” of changes as an opportunity to “step up, serve, pray, and grow.”

He released the following schedule that will guide Sunday morning activities for the next several weeks:

By Lane Corley MADISONVILLE, La. - In Luke 15, Jesus gives us a glimpse of the Father’s heart for the lost. 1. Those far from God liked Jesus and he liked them (verse 1). Is that true of me? When was the last time someone far from God approached me? Am I available to them? Building relationships with … END_OF_DOCUMENT_TOKEN_TO_BE_REPLACED