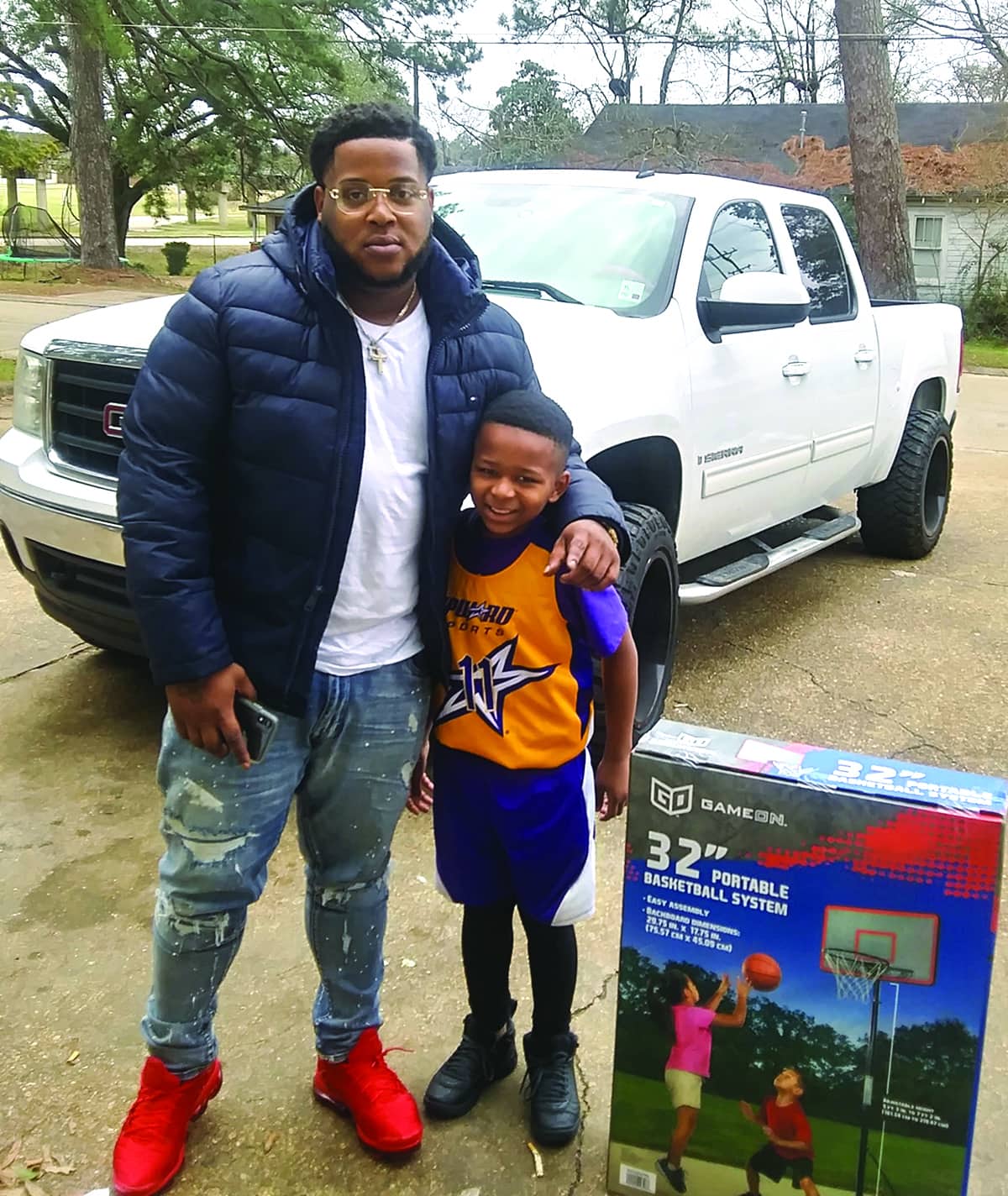 Devin Hinkston gifted Jeremiah Williams a new basketball goal on Feb. 13 after noticing the youngster was using a trash can as a makeshift goal. Williams uses the goal to improve his skills he uses on the court during Upward basketball games at First Baptist Church in Pineville. Submitted photo

PINEVILLE, La. (LBM) –For several months Jeremiah Williams had used a makeshift goal to train for Upward basketball games at First Baptist Church in Pineville, but a passerby who drove by the young man’s home in mid-February decided he needed a real hoop to call his own.

Devin Hinkston first met Williams, 9, on Feb. 13 as he was driving around Alexandria and noticed the youngster was shooting the ball into a trash can. After a brief conversation with Williams, Hinkston purchased a basketball goal at a nearby store and surprised him with the gift.

“Ma’am, I saw your little boy shooting the ball in the trash can earlier and so I bought him a basketball goal,” Hinkston, a member of New Scott Olly Baptist Church in Alexandria, told the boy’s grandmother, Patricia Williams.

The gesture prompted Williams to share the news on her Facebook page, which since Feb. 13 has generated 13,000 likes and 20,000 shares and prompted stories by numerous local and national media outlets. The Kelly Clarkson Show is scheduled to air the story, March 30, and Hinkston and Jeremiah Williams are scheduled to fly to New York City to appear on Good Morning America later this summer.

“I got emotional and teared up when he showed up at our front door with the new basketball goal,” Patricia Williams, a member of Zion Hill Church Family in Pineville, told the Baptist Message. “Once Devin did that, I knew this was some good news that had to be shared in a time when there is so much negativity. Only a week earlier I had thought of getting him a goal and here it was that God provided through Devin. It was truly an answer to my prayer.”

Since receiving the gift, Jeremiah has used the goal to hone his basketball skills; and he is grateful for the friendship formed with Hinkston.

“I thank God for him,” Jeremiah said. “It was his moment to shine.”

Hinkston, who was honored during the Upward closing ceremony, Feb. 28, at FBC Pineville, said the experience has led him to start Jeremiah’s Dream, a non-profit organization that will help others like Williams. He hopes the organization will fund a recreational center in the Alexandria-Pineville area that will offer after-school tutoring and a gymnasium with amenities such as pool tables and ping pong.

“It’s pretty cool and sometimes overwhelming,” he said. “I never expected this but I’m glad God gave me the light I need to shine on these kids. I just want to bring all kids together of all kinds and just shed the light back on what’s the future. It should be a major success.”

“Upward basketball and cheer is a wonderful program that not only teaches children basketball and cheer skills, but also teaches them how to play with a purpose and to live their life with a purpose,” she said. “That purpose is to share the love of Jesus with everyone we come in contact with. It is awesome that Jeremiah, one of our Upward basketball players, got to be on the receiving end of a community member’s generosity. Devin didn’t have to buy Jeremiah a basketball goal, but he lives his life with purpose and he desires to help others with the resources he has been blessed with. It is awesome to see how God is using Devin’s generosity here in Pineville, Louisiana, to make a difference literally around the world.”

By Don F. Mabry ALEXANDRIA, La. (LBM)-- The number of churches in our country constantly is changing and it is very difficult to acquire information from the various denominations, but estimates indicate that there are 330,000 Christian churches and congregations in the United States today. But the question … END_OF_DOCUMENT_TOKEN_TO_BE_REPLACED