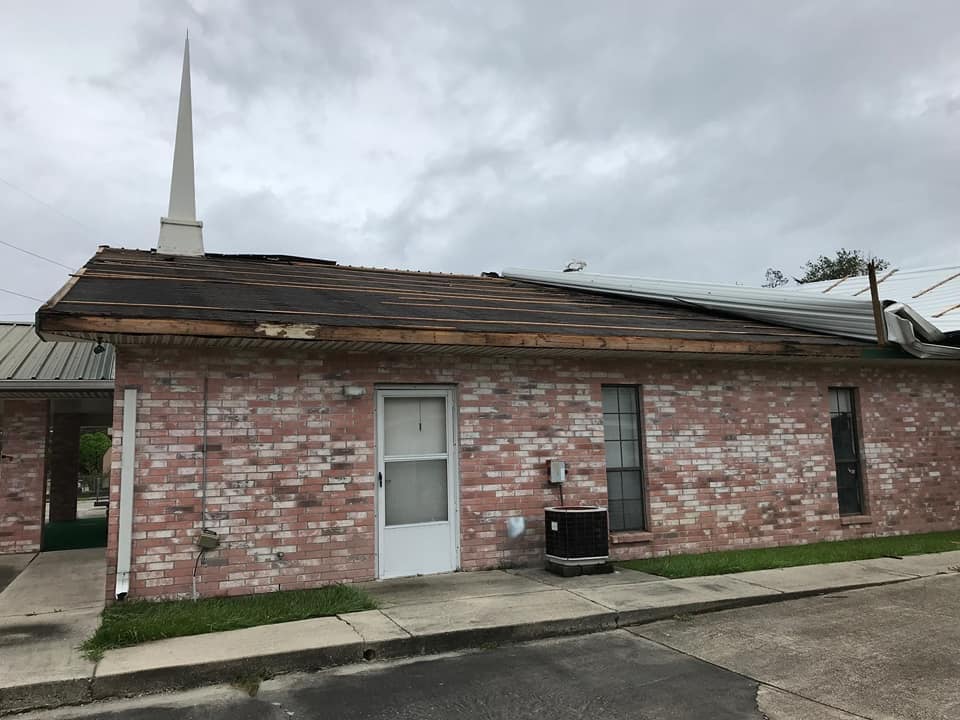 By Brian Blackwell, Message Staff Writer
ALEXANDRIA, La, (LBM) — Hurricane Barry made landfall Saturday afternoon at Intracoastal City, Louisiana, according to the National Hurricane Center, and weakened to a tropical storm as it moved inland.
Meanwhile, a number of Louisiana Baptist churches have announced they would be serving as  community shelters.
STORM PATH
As of 1 p.m. the eye of the storm was about 5 miles inland and moving northwest at a speed nearing 6 mph. Maximum sustained winds were 70 mph and extended outward up to 175 miles from the center.
Meteorologists expect the system to turn north-northwest tonight, followed by a turn toward the north on Sunday.
Along its path through south-central and southeast Louisiana and southwest Mississippi, rain accumulations 10 to 20 inches are forecast with isolated maximum amounts of 25 inches.
SHELTERS, DAMAGE, RESPONSE
South Walker Baptist Church in Walker, Christ’s Community Church in Dedham Springs and Satsuma Baptist Church in Livingston have opened to serve as shelters in their respective communities.

Mechanicville Emmanuel Baptist Church in Houma reported that high winds had damaged the worship center roof.
Floodwaters caused a levee to overtop in Myrtle Grove, located Plaquemines Parish, WAFB reported.
Lt. Gov. Billy Nungesser said water was also flowing over the levees in Jefferson Lake and Point Celeste. The U.S. Coast Guard responded to rescue 12 people in distress due to flooding, according to a news release.
Residents of Montegut were helping livestock owners rescue horses, cattle and other animals as a levee was overtopped bear the Hunble Canal, WVUE reported.
In Patterson, a tree fell on a mobile home on Hickory Street in Patterson, KATV reported; and, in Central, a large tree fell on a Welcome Hites Drive home ahead of this tropical storm system. No injuries were reported in either incident.

By Waylon Bailey Recently, I saw a tweet on Twitter that asked the question, “What would Jesus do in the midst of a worldwide pandemic?” No answer to the question was given, but the author obviously had an agenda and a suggested answer. The good news is that it led me to really ask, “What would Jesus … END_OF_DOCUMENT_TOKEN_TO_BE_REPLACED