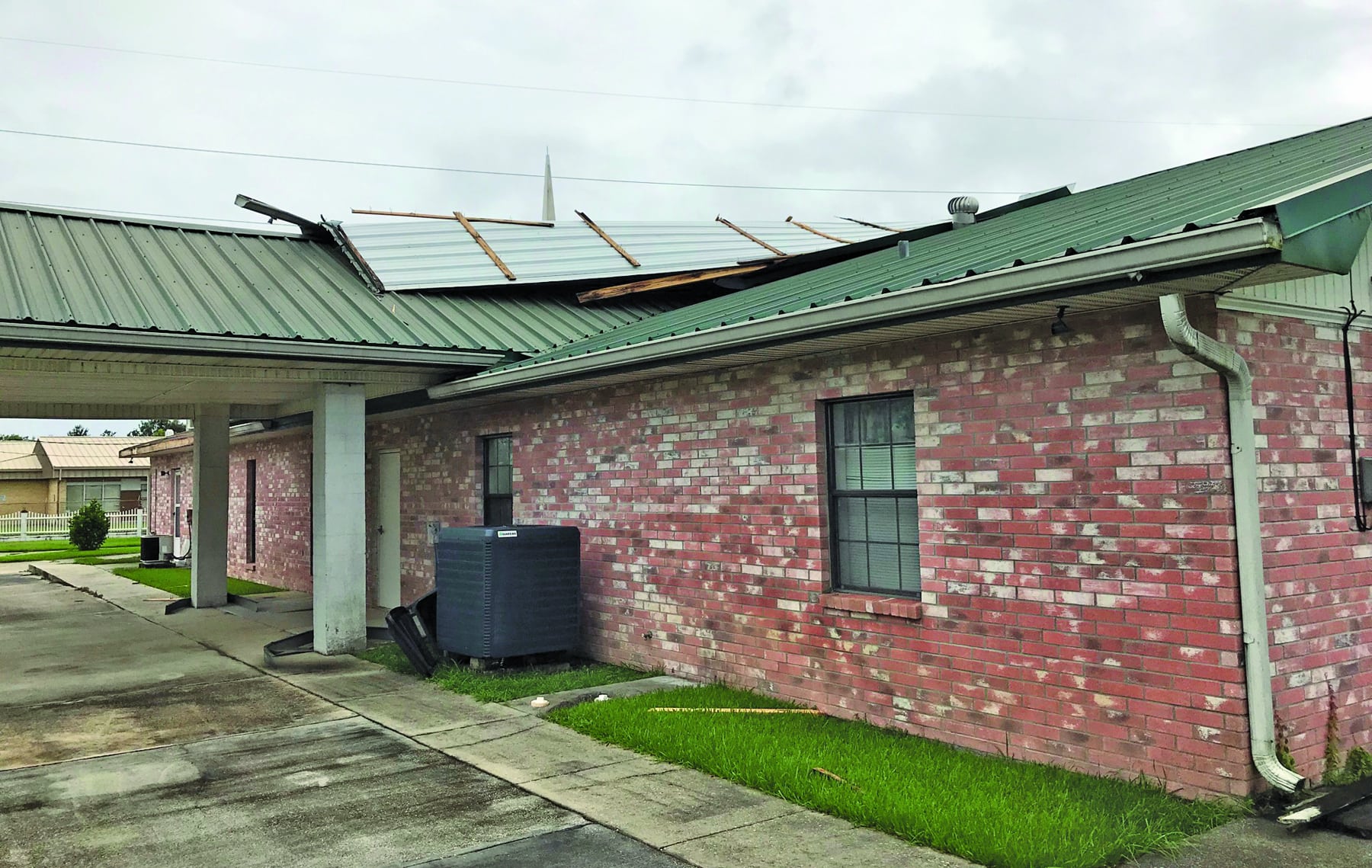 Mechanicville Emmanuel Baptist Church in Houma lost portions of its roof, windows were broken, cemetery fencing was lost and a gazebo damaged.

ALEXANDRIA, La. (LBM) — The devastation from Hurricane Barry was far less than anticipated based on forecasts leading into the weekend, but for those who sustained damage this news does not lessen the impact on them.

Several Louisiana Baptist churches reported that facilities suffered from floodwaters and winds as the result of Barry trekking through the state as a tropical storm and now a tropical depression.

In places the storm dumped more than 20 inches of rain and produced sustained winds of 75 mph, with even higher gusts.

With regard to Louisiana Baptist churches, Gibbie McMillan told the Baptist Message that he had received reports from three congregations, so far:

— Mechanicville Emmanuel Baptist Church in Houma lost portions of its roof, windows were broken, cemetery fencing was lost and a gazebo damaged.

Pastor Chris Jeffus reported to the Baptist Message that high winds damaged the roof and steeple of his congregation, the Trinity Baptist Church in New Iberia.

McMillan, state disaster relief coordinator for Louisiana Baptists, said a joint response team from the Eastern Louisiana and Washington Baptist Associations already were on the way to effect roof repairs to Mechanicville Emmanuel  Baptist Church. Meanwhile, a team of Baptist Collegiate Ministry students was in Moss Bluff, which received 15 inches of rain since Sunday afternoon, helping homeowners with cleanup and restoration, he said.

Before Barry made landfall Saturday, July 13, in Intracoastal City, Louisiana, some weather sources projected up to 25 inches of rainfall in parts of the state. But many areas experienced much less, mostly due to dry air from the north that kept Barry disorganized, according to multiple meteorological reports.

Steve Horn, executive director for the Louisiana Baptist Convention, told the Baptist Message that he was convinced that prayer made a difference.

“We wake up a thankful people this morning,” he said. “Certainly, we sympathize with our brothers and sisters who are still dealing with flooding rains this morning. We continue to pray that God will protect life and property. We are in communication with people around the state to see how we might best assist them to minister to their communities.

“We also take our stand on God’s Word as in places such as James 5:16,” Horn said. ‘The effective, fervent prayer of a righteous man avails much.'”

Horn emphasized that “nothing is too difficult for God” who can do all things.

“Whether it is to destroy a storm or deliver us from the destruction of a storm, God is able,” he said.

“We are blessed to have escaped this disaster,” Hebert said. “Thanks to the Lord for his hand of protection.

“Churches in Bayou, Gulf Coast and Evangeline Associations seemed to be effected more than others with Bayou Association’s Mechanicville Emmanuel Baptist Church being the worst,” Hebert said. “Though we knew this storm was not real organized and barely hurricane strength, there is always potential for severe damage due to flooding and accompanying tornadic activity.”

Tropical Depression Barry was located 70 miles west-northwest of Little Rock, Arkansas, as of 10 a.m. Monday, but still was producing heavy rainfall in parts of southwest and central Louisiana.

The National Weather Service in Lake Charles reported extensive flooding in areas that have seen 6 to 15 inches of rain since Sunday, with isolated amounts of up to 20 inches in the Gillis-Ragley area as well as Oberlin. Additional rainfall was expected to continue to fall much of Monday. Flash flood warnings remained in effect Monday morning for the parishes of Acadia, Allen, Avoyelles, Beauregard, Calcasieu, Evangeline, Jefferson Davis, Rapides and St. Landry, the National Weather Service reported.

Already, more than 41,000 customers in Louisiana were without power as of 11 a.m. Monday, according to poweroutage.us.